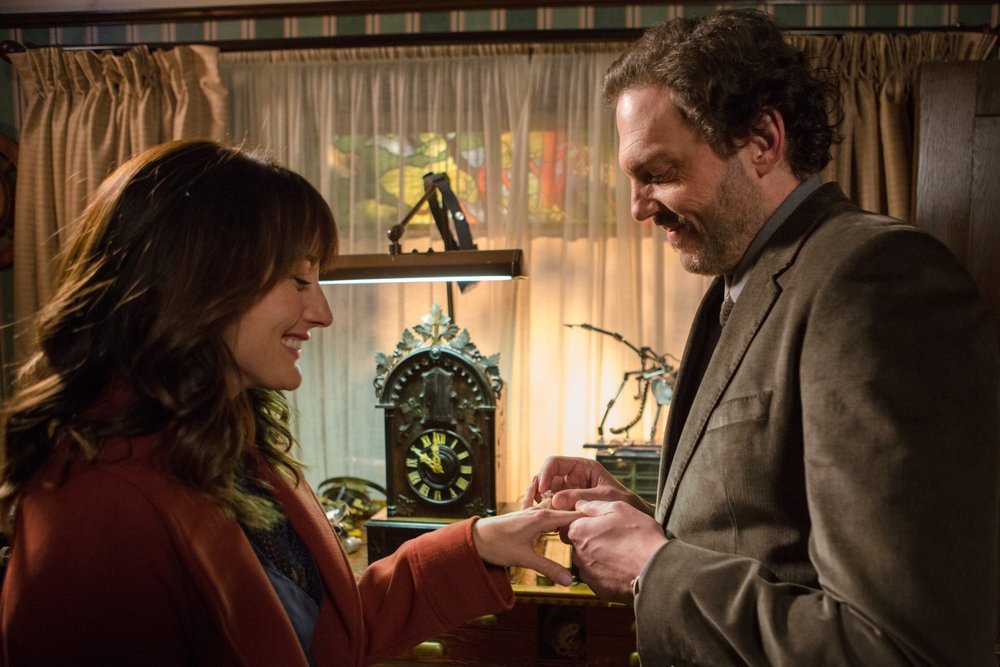 The premise of NBC's "Grimm" is simple: There are fairytale-like wesen, inspired by the Brothers Grimm, who shape-shift, oftentimes possess supernatural strength or skills, and wreak havoc on Portland.

It's ironic, then, that on the "good guys" side of the ledger, wesen Monroe (Silas Weir Mitchell), a part-wolf blutbad, and Rosalee (Bree Turner) a part-fox fuchsbau, are not only the "normal" ones, but actually provide grounding for the "human" characters.

In a phone interview this week, Turner said this idea was "kind of spoken aloud, how Wesen have been around longer than humans and - or kehrseites, shall we say - and, you know, I think we know history in a very different way than non-wesen. And, you know, I think maybe ... the grounding is coming from just being around for a long time. Experiencing, you know, basically holocaust with our kind in history (grimms have hunted wesen for centuries), and being our numbers dwindling and now we're - our numbers are smaller. And I just think there's a lot of weight and historical weight that comes with being a wesen that non-wesen maybe just don't quite understand, I guess."

Mitchell agreed and added, "there's a worldliness, you know, there's a kind of, you know, we actually know how the world works.

"And all the kehrseites, or the normees out there, who are looking at the world a certain way, the history that they are witnessing or reading about is actually a whitewashed version of what we all - or most of us, anyway - know to be the truth. So I think the anchoring element is exactly what Bree was saying, there's like a historical - there's a historical element to it. And there's also a, kind of, we know the truth. There's a wisdom to it, whereas, like, Hitler wasn't just Hitler. 'By the way, you know, Van Gogh didn't lose his ear because he was crazy, he was in love with one of us.' You know?

"So that worldliness, that kind of, like, this is the real truth, that element, I think, leads to, for the writers, the sense that the kehrseites, or the normees, are kind of scrambling around trying to figure it out, and there are some people out there who actually know the truth."

Two humans who "get it" are Nick and Juliette.

"Grimm" fans know Nick (David Giuntoli) is the hero, but also recognize Nick is new to the world of grimm and wesen. Plus, he's still dealing with that whole half-dead, super-zombie, super-powered ailment he suffered in last season's finale.

Nick's girlfriend, Juliette (Bitsie Tulloch), has come into her own this season as a valuable member of Nick's crime-fighting team. But let's not forget, in the first season finale she was poisoned, and she started season two as, well, bat-crazy, and in love with Capt. Renard (Sasha Roiz).

Nick and Juliette's relationship has been anything but normal.

But Monroe and Rosalee, for the most part, have been consistent - the rocks Nick and Juliette lean on for guidance. And in the process, the two have fallen in love with each other. To the extent anyone or anything is conventional on "Grimm," the relationship between Monroe and Rosalee has been fairly smooth to this point.

True to form with Monroe and Rosalee, their scenes together tonight will be both romantic and humorous - and another example of the actors' well-defined on-screen chemistry.

"I love Silas," Turner said. "I like everything about Silas (and) his big heart. He's a sweetheart of a man and also a true professional to work with.

"And, you know, I think from day one I knew that it was going to be a very cool journey with Silas, because he's all in, 100 percent, and he brings so much to the character and to the script that's not even necessarily down on paper. And it's just very exciting and fun to work with him - that's how I feel."

"And, you know, for me, working with Bree is just - it's delightful, because she is - same thing - she's all in," Mitchell said. "There's no bulls**t; there's no fussiness; there's no actor trying to do something. She's interested in the honesty of the story. And when you work with actors who are interested in the honesty of it, and the truth of it, then you look at the person and they're playing the same game you're playing. And so you're on the same field.

"It's not like, a lot of times you're trying to play badminton and the other person's bowling. And then you're not talking at all, you're just, like, this person is doing their thing, and you're doing your thing, but it's apples and oranges.

"With Bree, I really feel like we're on the same team - it's true of the whole cast, which is what makes 'Grimm' sort of special in my heart above anything I've done, is that we're all on the same team - we're all playing on the same field. And so, you know, Bree and I, we know that we're, like, we can trust each other, and we're both playing the same fun game. And that's really a delight because it, you know, it makes it a joy to go to set when you're all playing the same game."

"Grimm" airs Fridays at 9 p.m. on NBC. Find more about the show online at www.nbc.com/grimm.