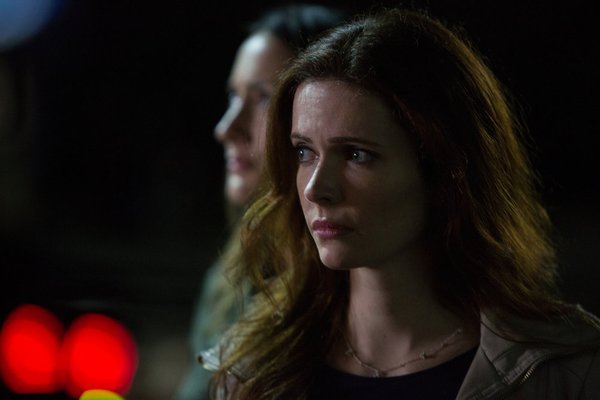 Interview: 'Grimm' is a joy for actress Bitsie Tulloch

A Portland cop with ancient powers battles shape-shifting wesen while trying to lead a normal life alongside his best friend (who is, basically, the Big Bad Wolf), and his longtime girlfriend (who, for many months, had boyfriend-specific amnesia).

It might be called "Grimm," but it's undeniably fun to watch.

It's the best kind of sci-fi (action/adventure-mythology-humor), and, airing each Friday, it's a perfect end-of-week form of entertainment.

There is, perhaps, no one having more fun with the NBC series than Bitsie Tulloch, who stars as Juliette (the one with boyfriend issues).

"I mean, sometimes we have really, really long days and everybody's kind of, you know, dragging their feet by the end because, you know, every so often, we'll have a 17-hour day. But I would say 95 percent of the time we're all really having fun," Tulloch said in a phone interview. "The 'Grimm' gang, whenever we're shooting together, we're always having a blast."

At the end of "Grimm's" first season, Juliette was poisoned by a hexenbiest (witch), Adalind (actress Claire Coffee), and fell into a coma. Adalind was bent because Portland PD Det. Nick Burkhardt (David Giuntoli), the grimm (our hero), took away her powers.

Juliette eventually awoke and spent most of season two trying to reclaim her life - not to mention her memories - and reconnect with Nick. Just when it seemed the two were ready to rekindle their romance, he was turned into a zombie (of sorts) and kidnapped.

When season three kicks off (tonight, 9 p.m.), the search for Nick begins.

"(Juliette is) kind of thinking, 'I will be damned if I'm going to lose him now,' " Tulloch said. "She's angry. She's scared that she's going to lose him again, because he's in a severe amount of peril right now - in the first three episodes coming back, in particular. And I think that, you know, she's going to do everything in her power to make sure that they get him back. Hopefully, safely before it's not too late."

"Grimm" is a solid hit for NBC, and Tulloch said the show is unique in its presentation.

"Season two was better than season one, and I think season three - you know, I've finished up to episode nine now - it's better than season two," she said. "It's getting better, you know? I think a lot of that has to do with the fact that Jim (Kouf) and David Greenwalt, our showrunners, have been really ... able to delve deeper into the mythology aspect. And I think that's really what the fans like.

"I mean, the procedural stuff is fun, but they're into this mythology and they're into, you know, this wesen family tree that's been created, and sort of connecting all of the dots, and now they're going further into these (royal) families.

"Episode one coming back - one and two, really - consider they're both still dealing with zombie storyline - they really feel like movies."

Juliette, as Tulloch explained, is "the only character of any of the series regulars who's either not wesen or not a cop or a detective."

Initially, Nick tried to keep her away from his wesen-fighting double-life. But now she's fully immersed in that world.

"It was just really fun and I think, you know, what I'm most excited about - besides the fact that every script that comes in, I'm like, 'Ah, this is so great'; I'm loving all the scripts and everything - you know, David and I - I usually shoot with David for the most part. I'm getting to shoot more with everybody else, because Juliette is now part of the 'Scooby Squad,' and that's been really fun for me. You know, I think that, in the past, you know, last season in particular, having amnesia, and season one, basically, the main thing was Nick having to hide it from me. (But) Dave and I have just been having so much fun shooting together this season, because it changes everything for us.

"The fact that I get to be involved, and I get to help him solve storylines - but even just the fact that we can talk about this stuff - has changed everything for us, and it's been really great."

While plot points kept Nick and Juliette apart for prolonged periods in the first two seasons, it now appears the two will, at some point - post-zombies - finally be a couple again.

"As far as episodes I've seen, yes," Tulloch said. "I mean, which is not to say that every time he's, you know, out on location or been called to a murder or something, I'm there. But it's really more about she's actually helping him for the first time as opposed to ... unwittingly being an obstacle."

At the end of the day, "It just feels like they have this really comfortable report. ... And it just sort of feels like they're just comfortable - like (a) little old married couple - and they really love each other a lot," Tulloch said. "And I think that, you know, with the new storyline with Juliette getting involved more, you know, he's going to look at her in a different light, because he didn't realize that she was such - kind of a badass. And you're going to see more of that. And I think that he is - there's going to be scenes where he's like a little impressed. He's like, 'Oh crap, I didn't even know this side of her. Look at this. This is interesting.' "

Grimm returns tonight and airs each Friday at 9 p.m. on NBC. For more on the show, visit http://www.nbc.com/grimm/.