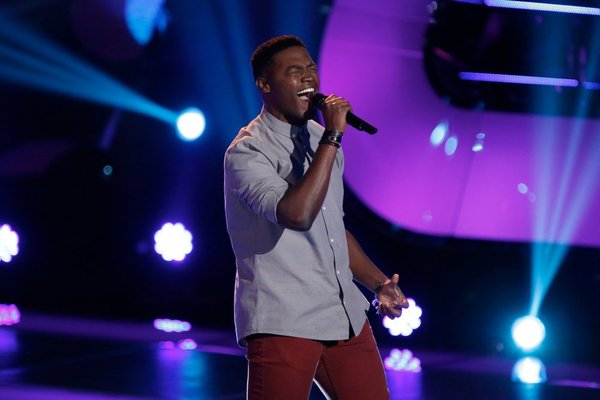 Season five of NBC's "The Voice" kicked off with rousing performances from a new batch of singers eager to work with coaches Adam Levine, CeeLo Green, Christina Aguilera and Blake Shelton. Among the week-one standouts, audiences met:

Prior to "The Voice," raspy rocker Kat Robichaud already had a backing band and the opportunity to tour. There was just one problem: She was barely making enough money to survive.

"Well, my band broke up in October. I wasn't happy with the way things were going," she said. "I was just spending so much time on the road, and we were just going in circles and just not really getting anywhere. So it was a really hard decision for me to step away from that."

Kat is using "The Voice" to relaunch her career.

Kat netted three chair turns from the judging panel following her high-kicking rendition of "I've Got the Music in Me."

"You remind me of all the greats, but so original; so new; so fresh; so raw. You more than entertained me; you engulfed me; you set me on fire," CeeLo said.

"I'm into her. I think she's something special," Christina said.

Even Adam, who didn't turn his chair, acknowledged, "You have a great voice."

"What I want to do with this is I want to re-emerge in the scene as a solo artist and do stuff that's more in, like, my vein of the kind of music that I like - like glam rock and theater-esque rock," she said.

Donna Allen knows what it takes to make it to the top of the music business, having spent her formative years working with Gloria Estefan as a member of Miami Sound Machine. The soulful singer stepped away from touring to focus on family, but has joined "The Voice" seeking a second shot at a singing career.

"Yes, I wanted to commit to my son. ... During that time, I decided to take some years off after touring for about nine years with Gloria Estefan. I just wanted to take time off for my son," she said. "I wanted to see him walk and talk and go to school and kindergarten. I wanted to be totally involved in his life.

"And now that he is 17 years old and taking Advance Placement classes in high school, I decided to go here and pursue on my career and hoping that I can get a huge record deal, you know, to do the music I enjoy doing."

Following her performance of "You Are So Beautiful," Donna caught the eye of two judges - Adam and Christina - both of whom fought hard to acquire her services.

"That voice - it is like the heavens opening up," Christina said. "I was so moved."

"The richness and the tone I connected with immediately," she continued. "I'm wide open. I'm refreshed, and I can't wait to see where you go. But I hope that your journey is with me. I haven't won yet; I'm hungry."

"I felt like we were at the end of the season," Adam said. "And I am going to be super bummed if you don't pick me, because I love you so much. ... And I want you on my team really badly."

A growing number of singers are entering "The Voice" with little or no singing or stage experience. That's not the case with Josh Logan. The rockin' father puts in three sets six nights a week as a working musician.

For him, advancing on "The Voice" could mean a better life for his teenage son - and a workload that's a little less rough. Compared to what he's been doing, Josh said the TV gig, "It's pretty cushy, actually.

"I'll take it, man. I'll take playing one song - singing one song - over six days a week, three hours a night, any day, you know? It's a nice switch and it's definitely in the direction I want to go towards. I don't want to be playing in bars for the rest of my life, you know, especially as often as I do.

"I mean, it's been great to hone my chops and to get, you know, my voice where I needed it to be, and I made a lot of friends and gained a lot of support from that. So I'm just going to utilize all the good aspects from all the gigs that I've done, and hopefully it'll take me to the next level with this competition."

Josh's rendition of "Too Close" appealed to Adam, Christina and Blake.

"You sounded a lot like the dude who sings this," Adam said. "That's about as legit as a voice can be, really. It's crazy powerful, man."

"I would love to work with you," Christina said.

Josh revealed he's big into R&B and soul, and that Stevie Wonder is one of his biggest influences. With that, he selected Christina.

Rugby player and sandwich maker Matthew Schuler was the first singer this season to net four "I Want You" chair turns from the judges. His version of "Cough Syrup" drew rave reviews.

"I gotta say, man, your voice is beautiful. It's beautiful," CeeLo said.

"I just jumped for joy," Adam said. "You know, we all turned around right away. And to see the joy and the passion with which you sing, dude, like that's the best part. ... I know, for a fact, that we can win this together. I know we can do it. This is the big one. This is the big one that I have to get. Have to get it; have to get you."

"I'm coming back (from a season off) with refreshed ears. I want to take this thing home," Christina said. She added, "Let me be the first female coach to win this thing. I am on your side. Please!"

With that, Matthew was sold, and picked Christina.

He explained the difficulty he faced in picking one superstar mentor over the others.

"Bro, to be honest I actually went in thinking I was going to pick Adam or CeeLo, seriously," Matthew said. "But, like, this is a testament to the production of the show. Like our producers, everyone who works on the show, the staff, is amazing. And they're like - they're seriously there for us.

"I had one of the producers come up to me before my blind audition and was just like, you know, 'Make sure that you have an open mind going out there, you know, and picking your coach.' Because, I mean, we can get in there with preconceived notions but, I mean, we have to survive - like we have the battles coming up, we have the knockouts coming up, and we have to survive those rounds; and we need a coach that's really going to - that's really going to fight for us - who really loves us, you know, who wants to invest in us.

"And, you know, I had to go out there with an open mind and open heart. And she said really listen to what they have to say; listen to, you know, how the coaches, you know, fight for you, what they want to do with you. And, I mean, there were some tough-like bidding. Like CeeLo said, like, talking about me owning myself. Like that was - it was very intriguing. Like he almost had me with that.

"But, I mean, I don't know, there was just something about Christina. And, I mean, Adam (jumped) out of his chair; Blake coming up and giving ma high-five; like, it was insane, you know? And so it was a really tough decision.

"But I feel like, you know, Christina, like I said, that she has that motherly quality, that nurturing quality, and she's just such an amazing, amazing vocalist. And I really feel like she wants to win this season. And, you know, if she has the faith in me to think that, you know, I can bring it home for her, than I'm all for it, you know?

"I think she's really going to fight for me. And, you know, I love her, and I really appreciate everything that she's been teaching me. It's amazing. She's great. And I'm really excited to ... be on the team and to be working with her right now."

"The Voice" airs Monday and Tuesday at 8 p.m. on NBC. For more information, visit www.nbc.com/the-voice.