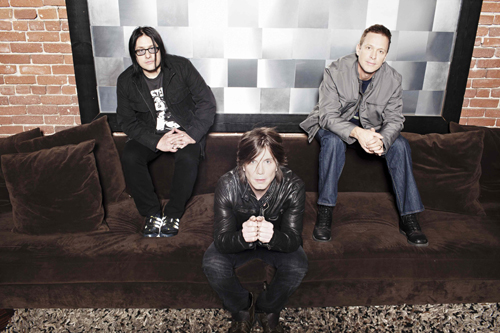 It's a good time to be a Goo Goo Doll.

Buffalo's hometown band has had a year to remember. On the personal side, John Rzeznik got married, and Robby Takac and his wife welcomed their first child. On the business side, their band has experienced a hugely successful summer, with a new single, "Rebel Beat," and appearances on "Good Morning America," "LIVE with Kelly and Michael," "The Rachael Ray Show" and "The Late Late Show with Craig Ferguson."

The Goo Goo Dolls have been working in support of their new studio album, "Magnetic," which debuted at No. 8 on the Billboard Top 200 in June.

On the band's website, Rzeznik said the record reflects where the band is in life.

"This album was really upbeat and fun. I don't think we've made a record like this in a while. Just had a great time doing it," he said.

"It was a lot different this time. We sort of worked one song at a time this time," he said. "You know, if John wrote the song, he would get together with the producer and he would work on the song a bit. And we'd come in as a band and start playing and rehearsing on the song. We'd record it, and finish it, and look at it, and decide it was done and then move on to the next.

"The process in the past had always been to sort of sit underneath an enormous pile of songs that needed to be finished. I think it gave us a lot of ... I would say trauma, looking at that enormous pile of work that we had to do to finish.

"I think this process of making records sort of made it a little bit more handleable for us, and it seemed like we were much better friends at the end of it, this time, than we had been in the past. We didn't necessarily burn our producers out like we had had a habit of doing in the past.

Of "Magnetic," Takac, tongue-in-cheek, said, "I hope we sell tons and tons of records and keep the legacy of this thing moving forward."

In all seriousness, he explained, "Just like every time we release a new record, you hope for the best and go out there and do your best to make it happen."

The Goo Goo Dolls are returning home(ish) when they perform Aug. 24 at Darien Lake. That's followed by two nights in Ontario touring with Matchbox 20.

"We were talking the other day. Between our two bands, there's probably about 20 top 10 songs that are going to be played throughout the course of the evening, which is pretty amazing," Takac said. "I don't think there's an awful lot of tours that can boast that."

It's just one more good thing for the Goo Goo Dolls in a year to remember.

For more information on the band, to purchase "Magnetic" or find concert tickets, visit http://www.googoodolls.com.