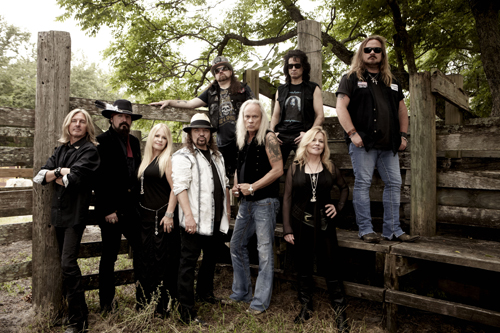 Lynyrd Skynyrd + Artpark audience = A good time for all

Do you remember reading those "Choose Your Own Adventure" books as a child?

A Lynyrd Skynyrd concert is sort of like a "Choose Your Own Adventure."

"We love getting the crowd into it," singer Johnny Van Zant said in a phone interview. "I want the crowd to go home hoarse, too. We feed off the crowd. That's what this band's all about is feeding off the crowd."

So, when the 10,000-plus who bought tickets to watch Lynyrd Skynyrd at "Tuesday in the Park" at Artpark arrive next week, the fate of the show will rest in their hands.

Van Zant is confident the crowd will be loud (and the band will be happy).

"You know, man, we've been very blessed. Our fans have stuck with us," he said. "We don't call them our fans, we call them our 'Skynyrd Nation.' We're three generations old. When you're up on stage with Skynyrd, man, you go, 'God, man, there's ... grandma; there's uncle, brother, cousin, kids, kids of kids.' You know?"

Lynyrd Skynyrd fans have loyally stuck with the band since its inception, which is notable because the group has had several lineup changes since forming in 1965. More than a half-dozen band members have passed away - half as a result of accidents, and all at a young age. This includes original singer/songwriter Ronnie Van Zant (Johnny's brother).

Today, "We got a great group of people here," Van Zant said.

"For us, we always go back to music," he said. "Music's a great healer. And we just love doing it."

While fans may feel bad for the band's losses, the band feels bad for the fans' losses - lost jobs and wages, in particular. It's for that reason Lynyrd Skynyrd aims to make each concert performance memorable.

"We go out, we're kind of one of those weird bands where people say, 'Hey, can we get backstage. There must be a party,' and all this stuff," Van Zant said. "For us, we're really calm backstage. We're drinking Diet Cokes and we're kind of hanging out and laughing and telling jokes and just getting ourself in the mood.

"But when we hit the stage, you know, that's when it's like, 'Hey, let's give it our all for 90 minutes,' or however long we're contracted to play.

"We go out and we try to take peoples' worries away. You know, it's tough times for this great country of ours. Not everybody's doing good. So, for somebody to put down money to come see us play, we try to give them all the energy that we can. That's what we're about; it's getting people to leave their problems behind for a little while, and letting us take over the driver's seat, and having a good time.

"If you want to have a good time, come out and hang with us for a while. We'll play you some great songs to get your mind off all your troubles.

Van Zant recalled a recent concert appearance that typifies what he hopes to find at Artpark.

"We got there, and (we're) looking for the backstage area," he said. "The cops sent us the wrong way. So, they actually sent us through the parking lot. And I was looking out as we're driving through - we were kind of lost; we were in a 'Spinal Tap' mode. 'Where's the stage? How do we get backstage?' - but we're in our bus. I'm looking at the fans out there. Man, it's kind of like we went to a football game. People are barbecuing out, and they're hanging out, and they're having fun. People were playing horseshoes and throwing a football. I was like, 'This is a cool thing.'

"It's the music that brings people together, but it's also the people getting together and having a good time and connecting as families. That's a good thing for us. That's what Skynyrd is about. My brother wrote songs for the people, and this music is going to be around a lot longer than us, of course, because music never goes away.

"For us, I guess we pinch ourselves sometimes and go, 'Wow, what an amazing thing.' I guess we won't really know the total reaction from us until maybe we're retired from doing this. But, you know, right now, man, we're enjoying it. We're having a great summer this summer. And (we) always call it our summer vacation. You know, a lot of bands go, 'Oh, god, I've gotta go out on tour.' But for us, it's a vacation.

"We get to go out, we get to see the fans, and play these great songs for 'em. What else could you want out of life? How many people would love to be in our position to be able to do this?"

Lynyrd Skynyrd will perform "Sweet Home Alabama," "Simple Man," "Free Bird" and a slew of other hits when the band takes the Artpark stage in Lewiston on Aug. 13. Tickets, $10 now through Monday, and then $15 the day of the concert, are available online at www.artpark.net and at the Artpark box office, 450 S. Fourth St.