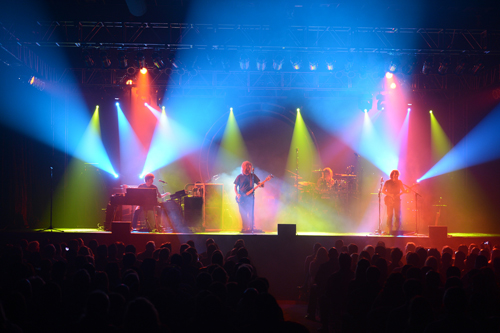 Fans of The Machine would find it hard to believe the band leaves anything to happenstance.

This is, after all, a group that meticulously plots which songs to perform each night in concert, and then pairs said tunes with a unique video, laser or light design. The foursome has detailed accounts of each and every one of their band's previous performances at Artpark.

But to fans' surprise, The Machine's very existence began without any blueprint.

It just sort of happened.

"It was a very natural and very organic (decision)," drummer and co-founder Tahrah Cohen said Monday. "There was not a lot of intention other than loving Pink Floyd music and loving the people that I was playing with. There was no intention to become the country's biggest Pink Floyd show. There was no planning. Everything evolved organically. It was the love of the music and love of the bandmates. It was very simple. It's the reason why you play music; it's the reason why you are in a band in the first place. That's how the band started."

Cohen said reforming The Machine was just as natural after co-founder and lead singer Joe Pascarell departed in January.

Adam Minkoff, who had performed with The Machine keyboardist Scott Chasolen, was elected to take over lead vocals and play bass. Longtime bassist Ryan Ball, meanwhile, moved over to play his instrument of choice: lead guitar.

"He's fantastic," Cohen said of Minkoff. "He's a New York musician that plays in lots and lots of bands of different types of music all over the place. He's one of the most talented musicians that I've ever met. He's a fantastic singer, and he loves Pink Floyd. He is a powerful vocalist."

"He's been watching Joe, foaming at the mouth for 15 years," Cohen said. "He finally has his opportunity to slide in and play lead guitar in this great band, playing great music - playing great guitar solos. So, he couldn't be happier - and he's doing an incredible job."

All in all, "The band, I must say, we're doing fantastically," she said. "There's been absolute support from the fans all over the country. And the band itself is having a fantastic time."

The Machine will, of course, perform the music of Pink Floyd when they headline the July 30 "Tuesday in the Park" concert at Artpark.

"We're so excited to come back. Oh my god. The whole band looks forward to that every year," Cohen said. "Lewiston is absolutely a special place."

For those ticketholders who've not yet watched The Machine perform, we offer a word of caution: This is not your typical "cover band."

"A name is a name," Cohen said. "You call us a cover band, a tribute band - whatever. We've been at it long enough that, for me, it doesn't matter what label someone puts on us. We're a great band, and we'd be a great band if we were playing Zeppelin, Pink Floyd, our own music. We're all natural musicians, and it's our life. So we know how to play music separately and as a group."

In keeping with the Pink Floyd theme, The Machine promises a grandiose "interstellar multimedia and light show." But the special effects are not at the expense of the music.

"Our band has always been about the music first," Cohen said. "I'm sure anybody in a band would say that, but I don't know that they can back it up like we can.

"I wouldn't have continued if I didn't believe that we were delivering that same musicality, and the same freshness that The Machine is known for. As musicians, that's what we strive to do, is give the audience a musical experience first and foremost.

"That's why you're there. I mean, some people are there for the lights and the lasers and the spectacle, but the majority of people that are going out to see a live band want a musical experience. They want to feel the singer's emotions - the whole band's emotions. And we have done that consistently, and we continue to do so with the new lineup."

The Machine performs Tuesday at Artpark in Lewiston. The show begins at 6:30 p.m. There is no opening act. Tickets are $5 now through Saturday, and then $10 Sunday through Tuesday. For more information, or for tickets, visit www.artpark.net. Find more Artpark news, interviews, photos and videos on our Artpark page.