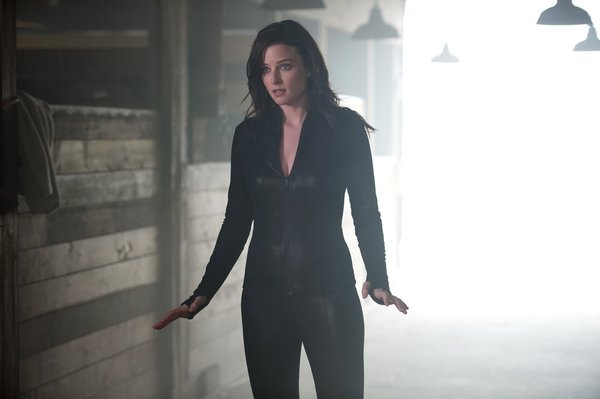 Fans of "Continuum" may have wondered recently if time-traveling super-cop Kiera Cameron's resolve to return home, to 2077 and her husband and son, was intact. As season one ended and season two unfolded, her motivation appeared to wane. The more Kiera focused on stopping Liber8 in 2013, the less it seemed she wanted to leave this timeline.

That attitude shifted last week, as Kiera observed her son's birthday. She couldn't be with him, and as she imagined his feelings of abandonment, she snapped. Her actions triggered an unexpected response from her CMR program and, more importantly, a newfound motivation to get back to Sam.

"Towards the end (of season one), there seemed to be a lot of other things that were coming in to play," actress Rachel Nichols explained in a phone interview. "There's a very important question that (CMR creator and future tech genius) Alec asks Kiera at the beginning of season two, and he says, if you had prevented that building from going down in the finale of season one, did it ever occur to you what that act might have done to your future. And it's something that she has to think about. And crazy Jason (a fellow time-jumper) says something else very important to her, which is, after you've been here for a certain period of time, your memory of the future starts to fade, and you begin to question if you were ever there. Also something that Kiera finds extremely terrifying.

"Her resolve to get home is still very much intact, but season two is very defined by the idea that she realizes that she was sent here for a reason. And she doesn't have a shot to get back until she completes this mission that she doesn't know anything about.

"But she's the kind of person who is going to do her job while she is here, because that's what she was sent to do, and that's her purpose. And it's the idea that she can't get home without doing it, so she's got to do it."

Nichols, who spent one season on "Alias" and one season on the short-lived "The Inside," said year two of "Continuum" has afforded her the opportunity to expand her character.

"The writing is fantastic on this show," she said. "Season two has a lot of - there are a lot of sort of deeper emotional points. And there are - there's more of a definition between her relationship with Carlos (Kiera's Vancouver PD partner), and that gets obviously deeper. And her relationship with (Alec) and (former Liber8 member Kellog) goes through sort of a lot of ebbs and flows. I mean ... Kiera and Alec this year, you know, go - they have their highs and they have their lows, and that's something that was very - was not really present in season one."

When Kiera first arrived, in 2012, she met Alec, who, audiences soon discovered, would grow into a Bill Gates-type figure. The two quickly bonded as they tried to figure out who or what sent Kiera and a handful of Liber8 members back in time.

At the end of season one it was revealed that future Alec was responsible for the time jump.

"You know, he was her No. 1 guy, so to speak, and she was his No. 1 girl, and that relationship suffers this season," Nichols said.

"And just the, you know, finding out sort of more about who (Kiera) is and where she comes from and the state of the world at the time that she left, and what she's discovered about the present day is constantly changing her impression of, you know, the battle versus good and evil, right versus wrong," she said. "It's just that season two is - there was a lot of setting up to do in season one, so season two definitely has the moments of more sort of - more discovery for her character and how she feels with - how she dealt with her life in the future, and how she's doing with the life in the present day."

"Continuum" airs Fridays at 10 p.m. on Syfy. For more on the series, visit www.syfy.com/continuum.