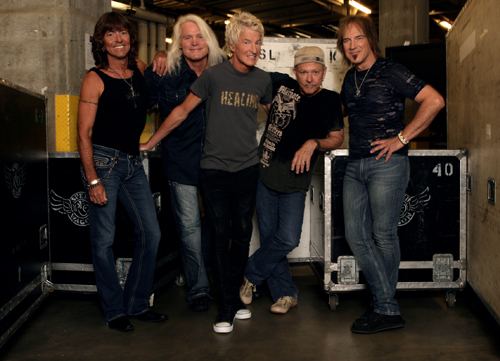 Benjamin Franklin once said, "In this world nothing can be said to be certain, except death and taxes."

Come Tuesday, we can reasonably add something else to that list of certainties: The only thing pouring down from above at Artpark will be hit songs.

"We used to say 'REO, "Rain Expected Outdoors," REO," lead guitarist Dave Amato said Thursday. "We've played so many rain dates. We hate that. But we still do it, and the people come in the rain."

When told the forecast (79 and sunny), and of Artpark's anti-precipitation policy, he said, "That's perfect."

REO Speedwagon recently performed indoors in Niagara Falls, Ontario. Amato said his band is looking forward to playing outside on the U.S. side.

"We love that area. Are you kidding me? Niagara Falls? We love that. Awesome," he said.

"It's just incredible up there," he added. "Beautiful area. People are great. I'd like to take my girl up there, for sure."

Amato said he is excited to perform in Lewiston. He's heard of Artpark's stage views, and understands it's an award-winning outdoor music venue.

"I can't wait to get up there and see how it looks," he said.

"Every gig we play, there's no better or worse. We just come and try to do the best show we can every night. And we have fun doing it, and we hope the people do, too."

When asked about REO Speedwagon's live show, Amato said, "Almost every song is a hit. I can guarantee you that.

"A lot of energy - high energy; running across the stage. Everything you expect in an REO show. You get the ballads along with the rock songs. Everything you think you're going to get and more.

"And we got a great stage that lights up. And backdrops, and good, high-energy rock 'n' roll. So come out and see us. It'll be a lot of fun. Everybody who comes has a lot of fun. We guarantee it, and we give 1,000 percent.

"We know the economy is not what it should be, so we know everybody that's spending money for tickets, we've got to give them the best possible show we can. Usually people come out and say, 'My god, you guys rock.' They think REO, and the ballads, and stuff like that, but (say,) 'You guys really rocked. Just unbelievable. I've got to see you guys again.'

One might think that, after decades on the road, Amato and his bandmates would be tired of touring. But "That doesn't get old for me," he said. "Sometimes you need a little break from it, and you come home for a little bit and say, 'Wow, I got tired from that five-week run,' or whatever. But then, when you're home for two weeks, you go, like, 'You know what? I want to get out there again.'

"If you're a musician - I don't care who you are or how old you are - it's in the blood. You want to go out there.

"We've been out here for so long we know each other," Amato said. "Kind of like baseball teams, you know, we know the guys from the other teams. When we go out with somebody, we get excited and we see old friends again. It's great to hang with them for however many weeks of the tour it is."

Of course, Amato is happy just hanging with REO Speedwagon, too.

"When I look across the stage, just respect of Kevin, Bruce and Neal," he said. "Bryan and I joined in 1989. Just from what they did before. I've been in the band for 24 years. They're my brothers and my best friends, and I just respect them for what they did in the heyday with 'Hi Infidelity' (which included songs "Keep on Loving You" and "Take It on the Run"). ... I didn't think I'd be in this band that long. When I was doing stints with Nugent, like for three years, and Cher, I think I did four years with that. I mean, 24 years - I can't believe it. I can't believe I've been in this band for 24 years.

"And we all live in the same bus, and we're good friends. And Kevin's songwriting is amazing. And Bruce, and Neal's been in the band for over 40 years. It's incredible.

REO Speedwagon headlines "Tuesday in the Park" at Artpark on June 18. The show begins at 6:30 p.m. For more information, or for tickets, visit www.artpark.net.