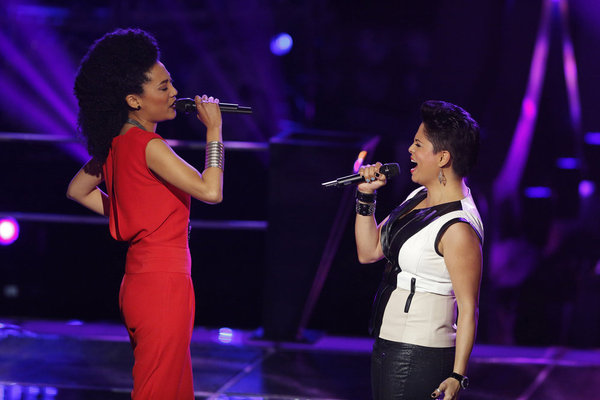 Over the course of three seasons and 72 duels, Adam Levine heard all vocal types and watched every form of "Battle Round" performance imaginable.

So it was somewhat shocking to see him sit stupefied following Monday's season four battle between Judith Hill and Karina Iglesias.

"That was not a great battle, that was the best battle I have ever seen on this show," Adam said after the singers' performance of James Brown's "It's a Man's Man's Man's World." He added, "I knew how powerful you both were, so the only loser of this 'Battle Round' is going to be me (having to pick one over the other)."

When Judith and Karina entered the ring-shaped stage, they bowed to each other as if paired in a martial arts competition. While there were no karate kicks, the two quickly unleashed an array of vocal chops. As they performed with passion, power and poise, it was clear to see there would be no loser.

"Going into the battle for me ... I knew it was going to be epic," Karina said in a phone interview Tuesday. "I mean, Judith is incredible. She's an amazing talent and an amazing person that - and I'm going to give her the credit for the bow. That was her idea. But, you know, going into it, I knew that it was going to be something special. And my goal was to just, to stay on the show, and that's exactly what happened and I couldn't have written it better. So I'm glad I'm still here, and I'm glad she's still here. And I'm glad I don't have to battle her again."

Judith echoed Karina's statement, adding, "The feelings are mutual. I mean, Karina's so - an incredible singer and I had such a blast singing that song with her. It was a challenge for me, to be honest. I had to really work on things to sing that song, and I was intimidated by the song, as well. But once we got on stage, it just - it was just magical and I just loved - I had so much (fun). And I'm so happy that we're both on the show. And so, yes, that was so exciting to me."

Heading into the "Battle Rounds," Judith was viewed as a seasoned professional (she performed with Michael Jackson prior to his death), and one of the odds-on favorites to win "The Voice." All four coaches turned around for Judith in her blind audition, and Adam acknowledged her pedigree before he selected her the winner of her "Battle Round" performance.

"It kind of - they kind of set me up a little bit. I had - I was nervous, because I have a lot to - they kind of made the expectation a little bit high for my own good, and I kind of felt like I - you know, I was already sort of coming into the song a little insecure and I didn't know if I could sing it," Judith said. "So, you know, having that feel like I was sort of a frontrunner was stressful. So - but you know, I'm - I just had to work harder and really make it the best. I just do the best I can and not worry about the expectations."

Judith shook off any nerves, hit her marks on stage, and will continue on with "Team Adam" into the "Knockouts."

Karina, meanwhile, was "stolen" by Shakira and also will head into the next round. She said the opportunity to receive instruction from both Adam and Shakira is "incredible."

"I think that the best thing that happened to me on the show was that I got stolen," she said. "I mean, not - we - the people that got stolen are the few people that can say they've worked with not just one, but two mega-superstars. And to have - to be able to be under Shakira's wing now, I think is actually a better fit. Initially, I wouldn't have thought that way. But after she picked me and after, you know, being - having the chance to work with her, she's amazing. And I think I'm right where I belong right now. So it's actually a win/win. Definitely."