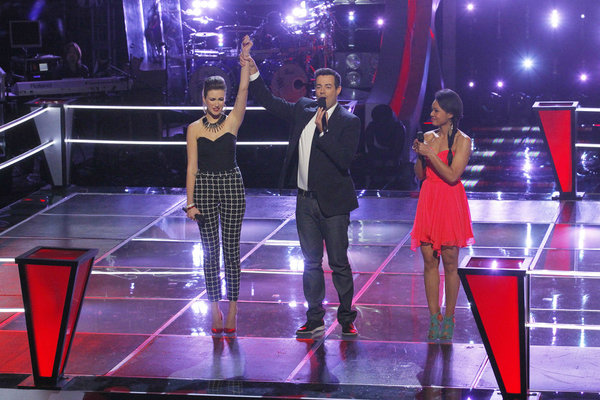 'The Voice': What about Audrey Karrasch vs. Jamila Thompson?

It appears one of the most interesting "Battle Round" performances last week ... was one we didn't see on "The Voice."

Model Audrey Karrasch, who impressed coaches at the blind auditions with her vocals -- and not her looks -- competed against Jamila Thompson, an R&B singer, actress and camp counselor. The two tackled Beyonce's anthemic "If I Were a Boy."

On air, the audience saw a glimpse of the girls' performance, and heard their coach, Usher, say, "It's a hard decision, because I saw the potential for both of you." But that snippet was all we got.

In a phone interview Wednesday, Audrey offered more information on the "Battle Round" matchup.

"My performance was really nerve-racking. It was a really hard song choice. I think that Usher was really ambitious when choosing that song. It was definitely a challenge," she said. "I couldn't have been paired with someone better, though. Jamila has such a great attitude and she's extremely talented and such a powerful voice. But it was - that battle was such a challenge."

"I'm not upset that I was montaged. The only thing I do wish was that people could have seen more of Jamila's performance, because my first episode was aired and I know that she had been montaged before in the past. And she has such a great voice, so I wish that she had more time to be featured.

Of course, Audrey is also excited she was chosen to advance to the "Knockouts."

"It wasn't the best performance, but I'm still happy to be here," she said.