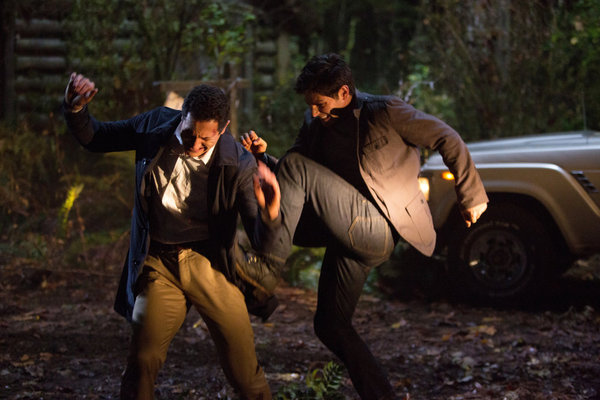 Nick has had enough.

First, his girlfriend, Juliette, refused to marry him because he is, well, a mythological wesen-hunting grimm.

Then, his nemesis Adelind (Claire Coffee), a wicked hexenbiest, poisoned Juliette and sent her into a coma.

Nick got her back, but it was a different version of Juliette. ... One that couldn't remember her boyfriend.

Juliette, unbeknownst to Nick, awoke from her coma after receiving a kiss from his police captain, Renard. Thanks to Adelind's actions, Juliette and Renard are now madly in love (no, really, they're a little cray cray), and can't stay away from each other.

Oh, and Nick has just learned Renard is a wesen, and probably an evil dictator, too.

When "Grimm" returns with the second half of its second season (beginning tonight), Nick and Renard will have a good, old-fashioned brawl.

Actor Sasha Roiz, who plays Renard, said he was a little surprised to see the hero and villain do battle this early in the series, but "I'm really glad that it's happened. I'm really glad that we had a chance to finally confront each other, because I think it's something the fans had been waiting for (for) a long time. And we - as characters and actors - had been waiting for as well."

Bitsie Tulloch (Juliette) isn't saying if she'll stay with Renard, return to Nick (actor David Giuntoli), or, you know, return to her right mind. For the now, the actress is just having fun putting a different spin on her character.

"In season two, I've had a lot of - I've had so much more to do with her," she explained, "which is not to knock the storyline from season one, because, you know, at the beginning of season one, this guy who I've been dating, who I loved, he lost basically the woman who raised her (Nick's aunt Marie, also a grimm). And I know a lot of fans were sort of saying 'How can she be so naïve - how is she not seeing this (Nick's secret side),' but she was just being really understanding and sensitive to Nick's situation.

"But waking up in season two in a coma and then having just this big empty hole where this man once lived is - has been sort of crazy, and I have to say you have not seen the worst of it. What goes on with Juliette gets much worse before it gets better. So, they're just sort of starting to lay out what's going to happen the rest of season two.

"As an actress, it's definitely been so much fun for me to really go into these deep, dark depths of the character and her mental space. And she's really starting to lose it, kind of. I mean, as you can imagine, she - it's crazy to wake up and see pictures of this guy - this stranger - all over your house, and be told that, you know, 'You guys were going to get married,' and all this stuff, and you have no recollection whatsoever. And then all of a sudden she's lusting after someone she barely knows and can't control herself. I mean, it's enough to make anybody mad. So that's been a lot of - that's been fun for me."