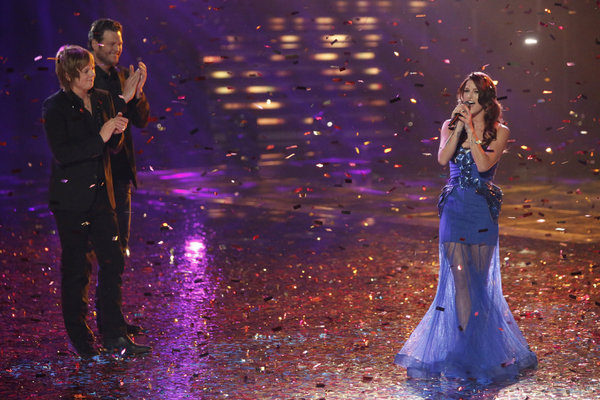 NBC's "The Voice" crowned Cassadee Pope as the winner of the popular vocal competition series' third cycle in Tuesday's live results show and season finale, earning her the grand prize of a recording contract with Universal Republic Records.

Pope, from Team Blake, beat out fellow finalists Terry McDermott (who came in second place) and Nicholas David (third place) - all of whom performed on the Dec. 18 finale.

Pope, from Los Angeles, is starting out fresh as a solo artist after touring with her pop/rock band, Hey Monday. She plays guitar as well as some bass, drums and violin, and prides herself on knowing a "surprising amount of 1980s rock music." In her spare time, Pope enjoys her hobbies of cooking, hiking and writing. Follow her on Twitter @CassadeePope and on Facebook at https://www.facebook.com/CassadeePopeMusic.

McDermott, from New Orleans, also was on Team Blake. Originally from Scotland, McDermott moved to the U.S. years ago with his band, Driveblind, but now he's trying to make it as a solo artist. His favorite song is "Imagine" by John Lennon. McDermott is a huge soccer enthusiast and currently lives in New Orleans with his wife and son. Follow McDermott on Twitter @TerryMacMusic and on Facebook at https://www.facebook.com/pages/Terry-McDermott-Music.

David is from St. Paul, Minn., and was on Team CeeLo. Formerly overweight, David fell into bad habits when he began performing with a country band after college. After meeting his dream girl five years ago and finding a spiritual path, he has cleaned up his life and now raises their two children (with another on the way). Singing what he calls "heart music," David continues to perform in nightly gigs. Follow David on Twitter @TheFeelin and on Facebook at https://www.facebook.com/thefeelin.

"The Voice" returns for a new fourth cycle of new shows on March 25, 2013. Aguilera and Green are taking the cycle off; their replacements will be Shakira and Usher. For more details, visit NBC.com's official show site: http://www.nbc.com/TheVoice. Like the show on Facebook at https://www.facebook.com/TheVoice and follow it on Twitter at @NBCTheVoice and #TheVoice.