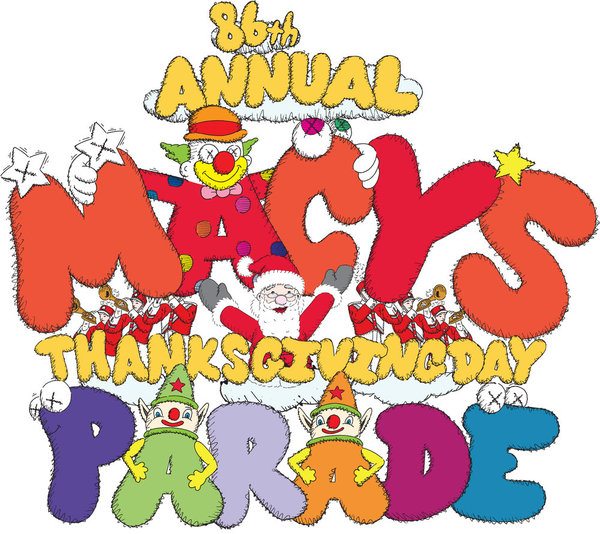 Event marches into the holiday season on NBC from 9 a.m. to noon (all time zones) Thursday, Nov. 22

America's favorite holiday tradition, the 86th Annual Macy's Thanksgiving Day Parade, returns to dazzle and enchant millions nationwide on Thursday, Nov. 22, from 9 a.m. to noon on NBC (all time zones). The Macy's Thanksgiving Day Parade will take to the streets of New York City with a cornucopia of whimsical treats for the whole family. With more than 3.5 million spectators watching the revelry live - and more than 50 million viewers tuned in to the magic nationwide - the 86th edition of the world-famous spectacle promises to be the nation's largest Thanksgiving Day celebration.

"Since the first broadcast in 1948, the Macy's Thanksgiving Day Parade has become a tradition for families across America," said Doug Vaughan, senior vice president, special programs and late night, NBC Entertainment. "This year we are thrilled to once again celebrate with some of the nation's best performers as we kick off the holiday season."

Featuring signature elements, the Macy's Parade has marked the start of the holiday season since its inception in 1924. This year, the lineup of wonder unfolds with 16 giant character balloons; 40 novelty/ornament balloons, balloonicles, balloonheads and trycaloons; 28 floats; 1,600 cheerleaders and dancers; 900 clowns; 11 marching bands; a host of celebrity performers and the one-and-only Santa Claus.

She added, "This incredible cavalcade will make its way down 6th Avenue, a path that marks only the seventh time the parade has changed its route. And, as it has during turbulent times in our history, we hope the Macy's Parade serves as a beacon of hope for all who tune in and gather with friends and family to give thanks this season, as they continue to heal from the devastating aftermath of 'Super Storm' Sandy. During its 86th year, the parade continues to create new memories and magical moments for more than three million live spectators and over 50 million who tune in across the country."

The parade's signature giant character balloons are one of the procession's most famous elements, each year drawing millions of cheers from spectators young and old. Joining the lineup this year is a returning favorite with a brand new design and two never-before-seen characters. On deck for a "Turkey Day" lift this year is Santa's favorite scout elf from the new beloved children's Christmas tradition, "The Elf on the Shelf," the lovable Hello Kitty aboard her fabulous airplane, and the "Smurferrific" Papa Smurf.

Also making its parade debut as the latest member of the parade's Blue Sky Gallery series is Companion by KAWS. The series, which debuted in 2005, invites world-renowned artists to create high-flying works of art for the procession. Said to be the artist's alter-ego, Companion is a shy character who prefers to cover his eyes from the millions of spectators set to gaze at him as he flies down the route. In celebration of this unique partnership, Brian Donnelly, better known by the moniker KAWS, also created the promotional artwork for this year's parade, which features his unique style and sensibility. Previous works to have joined this elite group include balloon designs by Tom Otterness, Jeff Koons, Keith Haring, Takashi Murakami and Tim Burton.

Setting the stage for adventure are the parade's signature floats. Taking spectators through magical experiences, the floats set the scene for amazing performances. Joining the lineup this year are six new landscapes, including the imaginative Daytime, Play Time, Night Time Too...; the wonderland of Goldfish on Parade; the beats lifestyle magic of Music Is Our Life; the hoops appreciation on board the 75 Years of March Madness; the home-based goodies of Stirrin' Up Sweet Sensations; and the ninja precision of the Teenage Mutant Ninja Turtles.

The 86th Annual Macy's Thanksgiving Day Parade will step off at 77th Street and Central Park West. The procession will travel down to Columbus Circle, turn onto Central Park South and march down a new path via 6th Avenue/Avenue of the Americas to 34th Street. At 34th Street, the parade will make its final turn west and end at 7th Avenue in front of Macy's Herald Square.

Note: All talent, performances, line-up and information included are subject to change.