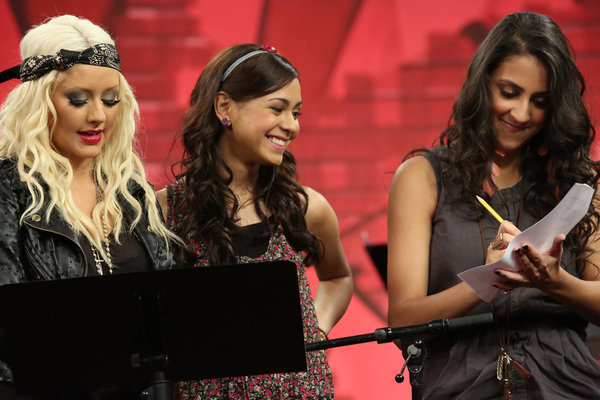 'The Voice': Big voices do 'Battle' in week two

In rehearsals with Christina and Green Day's Billie Joe Armstrong, the two singers struggled to find chemistry as Sylvia's power clashed with Joselyn's range. Sylvia was told to tone it down and show a tender side, as Joselyn was encouraged to pick her spots and speak up (so to speak).

When it came time to battle, the two offered an unexpectedly cohesive, engaging and enjoyable performance.

An emotional Christina had to catch her breath as she watched Sylvia and Joselyn perform.

"Joselyn, you sounded so wonderful opening up this song," said coach CeeLo Green. "It's like I had never heard you before. You really impressed me. This little thing with the big voice. I really enjoyed you.

"Sylvia, you have a very strong voice; a very commanding voice."

The girls credited their coaches with helping shape the potent performance.

"We collaborated with each other pretty well and we rehearsed as much as possible so that, you know, our different styles wouldn't clash on stage," Sylvia said. "And I honestly think working with Christina and Billie, they gave us really good insights on how to make our performances better and how to make each other sound better on stage."

"Well I think that, you know, we both have a very soulful voice and we are very passionate when we sing," Joselyn said. "I do think that, like Sylvia said, I think that Christina really helped us differentiate our styles and really kind of like she told us, 'Just be confident in yourself and don't get distracted. Really stay true to your own style and just do it even though it's hard.' Because, you know, we're battling together and we're doing this duet together. But, you know, it was fun working with Sylvia. And we just really discovered ourselves on that stage, I think, doing it together."

While the duet was masterful, in the end, both singers did enough to stand out individually. They were rewarded accordingly, as Christina picked Sylvia and Adam stole Joselyn, thus ensuring both singers would advance to the "Knockout" round.