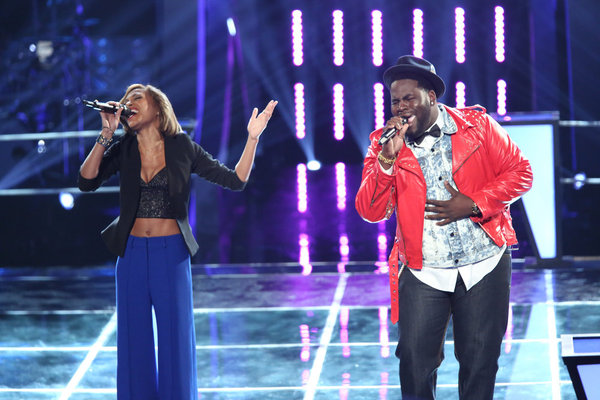 "The Voice": Pictured in the "Battle Rounds" are Amanda Brown and Trevin Hunte. (photo by Tyler Golden/NBC)

Not all battles are brutal. Some are beautiful.

On week one of "Battle Rounds" on NBC's "The Voice," Team CeeLo singers Trevin Hunte and Amanda Brown opted to better and not batter each other in the ring. Their rendition of Mariah Carey's "Vision of Love" was the performance of the season.

"For me and Amanda, we came into the battle just thinking of, you know, performing as a duet and not actually battling each other," Trevin told BTS. "We just wanted to make a great performance and I guess that's what we did.

"Well, for me, I worked hard every day and I know she did a lot in working, too. She always helped me, because I didn't really know the song. I guess that's the process of what we did."

"Yes. I can agree," Amanda said. "Initially when we received the song, you know, we both spoke about it and agreed that it wasn't going to be as much of a battle for us. I mean, at the end of the day, yes, only one person is going to get chosen to stay on the team. But for us, we wanted to look at it as if it were a duet and, in that regard, (it was) a really awesome musical performance.

"Because of that mindset that we both had, it naturally kind of just progressed into something that was musical and fun and enjoyable to perform. I think that kind of worked in our favor having that positive mindset."

Trevin won the battle, and will continue on with CeeLo Green. Coach Adam Levine used a "Judge's Steal" to rescue Amanda from elimination (meaning she was given the chance to work with two of the show's coaches).

"I feel very, very blessed," she said. "It's been an amazing ride this far, and both CeeLo and Adam are just so unbelievably talented and have so much experience under their belt. For me, I can only say that I'm really, really excited and feeling very blessed at the moment."

The "Judge's Steal" is a new component to "The Voice." CeeLo, Adam, Christina Aguilera and Blake Shelton each can take two "Battle Round" castaways for their respective teams.

No sooner did Amanda become a "free agent" then Adam, Christina and Blake each pressed their "I Want You" button. Each pleaded for her service. In the end, she decided to work with Adam, the Maroon 5 frontman.

"For me, I felt like I had to have done something right," Amanda said of the judges' reactions. "You know, I felt like, initially, in the 'Blind Audition,' the response wasn't as overwhelming coming from the coaches. To see that they all heard a bit more of what I could do vocally, and in terms of my performance, and appreciated it, and understood it as being something ... musical, I can only say that I'm very grateful that they all responded the way they did."

"The Voice" continues Monday and Tuesday on NBC.