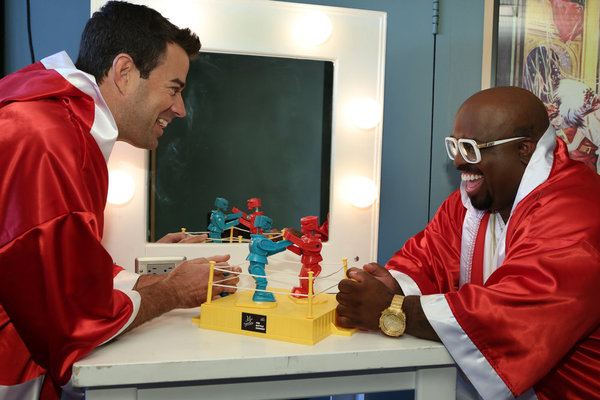 "The Voice": Host Carson Daly and coach CeeLo Green celebrate "Rocktober" and the start of the battle rounds with a Rock'Em, Sock'Em Robots battle of their own. (photo by Tyler Golden/NBC)

'The Voice': Let the 'Battle' begin

The "Battle Rounds" begin Monday on "The Voice." The 64 singers who were selected by coaches Adam Levine, CeeLo Green, Christina Aguilera and Blake Shelton will be paired off in groups of two, each competing for a spot on the "Knockout Round" and live shows.

One of the singers expected to advance is Chevonne, from Team CeeLo. The talented vocalist recently toured with Lady Gaga.

She previewed the "Battle Rounds" for BTS.

"First of all, the advisers come in and you see who they are now in the promo. It's very, very big artists with big careers and lots of really unique messages in their music and, you know, they even list the record sales of these artists and they're massive," she said. "So they're coming in supplementing already the genius of our coaches. And so now you want to impress two people. And for me, personally, CeeLo and Rob Thomas are huge influences in how I write and how I sing. And so, you know, you've got that sort of new element of two people that you're trying to impress - two people that you want to listen to and respect and learn from.

"But then you're also competing against your friend. Because when we joined the team, we all get very close very fast. We work hard together. We talk to each other about what we're going through. We cry, we laugh. You know, we're putting out outfits together at the same time. It's just this bonding experience that nobody else understands.

"And then to go up against one of your friends who you love and whose voice you respect and admire. It's quite terrifying. You have to sort of make a promise to yourself that you will honor them and their voice, but you will also do your best to stay on the show. It's just a really - it makes you feel so torn in so many ways. But I have to say it's quite - it's a joyous experience all around."

The "Battle Rounds" always bring out the best in each singer. In past seasons, many talented musicians - and even some frontrunners - have exited "The Voice" at this stage of the competition. New this year, each coach will have the opportunity to steal two eliminated contestants from another team, thus allowing some of defeated favorites to stick around a little longer.

"The Voice" airs at 8 p.m. on Monday and Tuesday on NBC. Follow the show online at http://www.nbc.com/the-voice.

•Meet more of the singers, see additional photos and find social media addresses for each artist on our special "The Voice" showcase page.