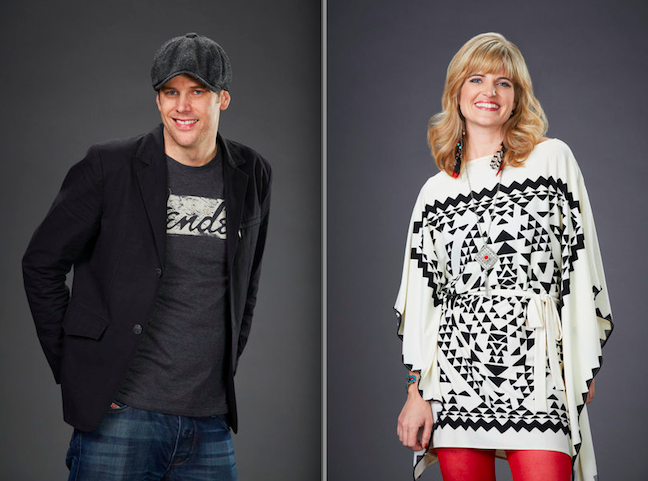 'The Voice': Mycle Wastman and Suzanna Choffel among early notables

The main selling point of NBC's "The Voice" is that, in fact, singers are chosen to advance based on their vocal talent and not on their looks or their age.

Only "The Voice," then, could bring us performances from 40-year-old Mycle Wastman and 32-year-old Suzanna Choffel, two gifted vocalists who are too free-spirited for "The X Factor" and too adult for "American Idol."

The strong ratings for "The Voice" are telling us that audiences don't want cookie-cutter competitors. The American public wants more singers like Mycle and Suzanna.

Of Mycle, CeeLo said, "You've got the whole spectrum, man. You are the total package. I'm the most excited about you than anyone else today."

"You did such an incredible, incredible job," Adam said. "I want you very badly to be on my team."

Blake added, "You're the best vocalist that we've heard today. That is fact."

Of Suzanna, CeeLo said, "I could tell that that was a grown woman singing that song."

Christina said, "I loved kind of the more subtle approach."

"It's hard to come up here and have something sound refreshingly unique. And that's what I heard in your voice," Adam said.

"Right now I'm extremely inspired by Sam Cooke, actually, and his music. One of my biggest influences at the moment," Mycle told BTS.

Moving forward, he plans to show his vocal diversity. He may even bust out some Led Zeppelin.

"Well, you know, I definitely like to explore into all genres," Mycle said. "I mean, when I listen to Zeppelin, especially, it's like, I mean they were so soulful, you know, Robert Plant had such a soulful voice. And I mean all their influences were basically southern blues. I mean, especially in the beginning.

"I like, you know, musically I love all things soulful. But I like to just put a soulful twist on everything I do. But I love, you know, to have the opportunity to explore different styles on the show, for sure."

While her spot-on version of Fleetwood Mac's "Landslide" carried her through the "Blind Auditions," Suzanna knows it will take more than vocal prowess to win "The Voice."

"I think you have to have really strong stage presence and try to keep your head above the water," she told BTS. "This is kind of a test of your, I don't know, I guess how strong you can be to not let other things get to you. Other people effect you, and really stay true to your sound, and your style.

"That can be kind of hard to do on TV. So I don't know, I guess just, you know, having a strong sense of who you are and showing that on stage. You know, making that come out through your voice."

Suzanna, a music teacher, has already outlasted a slew of vocal coaches who didn't net any "I Want You" chair turns from the coaches this season.

"You know, everybody is so different," she said. "I watched a few of those (episodes) and I think, I mean, I think it was honestly just a stylistic thing. I think my tone of voice or my style. Blake and Adam, I guess, heard something that they dug. I will say I think I might be slightly different from a couple of the other teachers in that I'm a little bit more, I'm maybe influenced by some different things. I'm not very classical and musical-theater-based, I'm a little bit more soul, pop, world, kind of influenced. So I think that shows through my music."