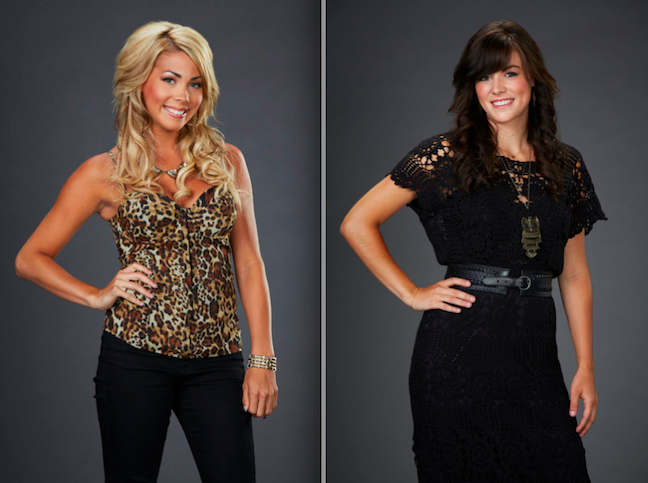 From "The Voice": Singers Liz Davis and Emily Earle (photos by Paul Drinkwater/NBC)

'The Voice': Will season three be the charm for country musicians?

There was no shortage of country music talent on the first two seasons of NBC's "The Voice." But when it came down to the finals, and America was voting for its favorite performer, there was no twang, steel pedal or pair of cowboy boots anywhere in sight. Instead, rock and R&B reigned supreme.

A pair of season three singers is looking to change that trend.

Liz Davis caught the eye of judges Adam Levine, Christina Aguilera and Blake Shelton with her frolicking-fun performance of "Here for the Party" last Monday, while Emily Earle won over CeeLo Green with her rousing rendition of "Ring of Fire" on Tuesday.

"I would love to see -- I would love for a country singer to win 'The Voice.' And I would love to be that person," said Liz, a 25-year-old Mississippi native. "But I just think that, you know, I'm from the country, obviously, and country music is such a huge part of my life. And, you know, I'm going to do everything in my power to try my hardest and my very best to represent."

Emily said country singers would do well to win over those who don't favor the genre.

"I think country's interesting because people that love country are obsessed with it and they're hardcore. And then people that don't like country hate it and hate anybody that does it," said the singer from Colorado Springs, Colo. "And so it's kind of a tough genre for a competition like this, I think. But I think what'll really help us -- what would help a country artist do well would be having a little bit of diversity and being able to kind of do that cross-genre thing. And I think also maybe not being as -- like maybe taking country to a new place.

"I think it's -- country's kind of at a place where it could go in many directions right now. And so that's why -- that's one of the reasons why I was excited to perform Johnny Cash. Because it's a classic, it's an older song, and it is country. But Johnny Cash wasn't just a country artist. He kind of broke boundaries in his time. And so that's what I'd like to bring to the genre."

Liz elected to join Team Blake, opting to work with the reigning Academy of Country Music Awards Male Vocalist of the Year.

"I can ... learn from him. I mean he's obviously very, very successful but he's so -- he seems so down to earth, too," she said. "And he seems like somebody that it would be easy to learn from. And, you know ... I look up to him. And I'm a huge, huge Blake Shelton fan, and so I just felt like it had to be the right decision."

Emily, meanwhile, decided to go with CeeLo -- a performer well known for his rock and R&B songs, and over-the-top costumes and theatrics.

"What I like about CeeLo is the fact that he's going to help -- he's a big performer," she said. "He's really great with, you know, visual performance and stuff. And I've always just been a girl with an acoustic guitar, which is great. And I love doing that. But this show -- the cool thing about this show and this opportunity is the fact that I'm going to get to learn and grow in ways that I never would have had I not done it.

"And so if you're going to go big, go all the way, you know? And so I figured -- I told myself when I was first auditioning that, like, I was just going to really go for it. And I think CeeLo is really going to help me to become a better performer and get me out from behind the guitar. And hopefully I'll learn some stuff that I can bring back to the guitar and be able to just grow as a performer in general."

Undoubtedly, Liz and Emily will benefit from their time performing in Nashville, Tenn. Both vocalists moved to the new music capital of the world to hone their singing skills.

"It's definitely prepared me," Liz said. "It's made me ... stronger. It's -- my drive -- it's crazy; I feel like I don't ever want to stop and it's a great place to be. I love being surrounded by music and such talented people. And I don't know if you've ever been to Nashville, I mean it's -- that's where it is. I mean, there's so much talent and it's exciting and I think that, you know, Nashville's a great place for me. And it's -- I get a lot of drive from Nashville."

The audition rounds of "The Voice" continue Monday and Tuesday at 8 p.m. on NBC. Find the show online at http://www.nbc.com/the-voice.