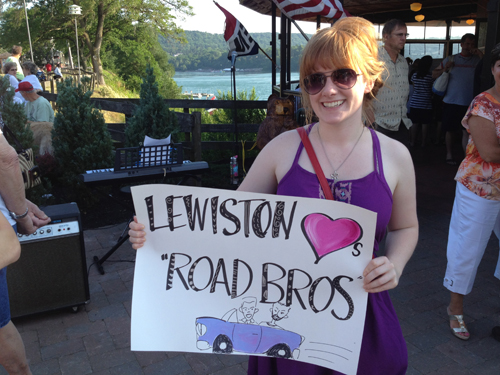 Residents and local volunteers welcomed Mike Shubic and Brian Cox to Lewiston at The Silo Restaurant Wednesday night. Shubic and Cox, aka the "Road Bros," are "Best for Food" judges for the Rand McNally/USA Today "Best of the Road" competition. In an online voting poll, Lewiston ranked No. 1 among the nation's small towns in the "Best for Food" category.

The reception was organized by local volunteers headed by spokesperson Leandra Collesano. It brought together residents and local business owners to support Lewiston - the smallest town in the "Best for Food" competition.

"We're going to blow them away with what we have in Lewiston," Collesano said.

Despite the village's small population, the judges made their way through a multitude of supporters who greeted them with cheers, high-fives and homemade welcome posters.

"Wow, this is overwhelming," said Shubic while the judges signed autographs and took pictures with fans.

Several key persons addressed the "Road Bros" to begin their exploration of Lewiston's eateries and establishments.

"When it comes to food, we already know we're the best, but our job is to convince you of that, and to prove it over the next couple of days," said volunteer Lee Simonson.

Excitement mounted when Mayor Terry Collesano handed Shubic and Cox a key to the village as their "pass" to get into the restaurants (Town of Lewiston Supervisor Steve Reiter made a similar gesture on Thursday). Singer Anne DeFazio and pianist Donald Shrimpton added to the atmosphere, performing a song as tribute to Lewiston and its excellence in food.

The evening culminated when the crowd gathered at the Freedom Crossing Monument chanting, "We're No. 1!" as a celebratory shot was captured by representatives from the Travel Channel, who will air a one-hour special on July 25 at 8 p.m.

Though Lewiston may be the smallest town in its category, the residents and volunteers ensured that the "Road Bros" would remember its hospitality as well as the great food.

"What we lack in size, we make up for in heart," Simonson said.

The judges discovered all that Lewiston has to offer as they surveyed the village's restaurants and establishments on Thursday.