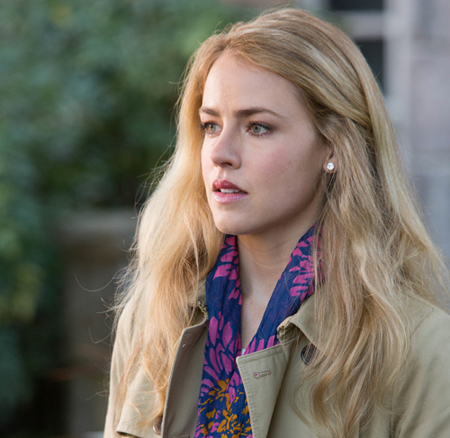 Amanda Schull guest stars on the "Happily Ever Aftermath" episode of "Grimm" on NBC. (photo by Benjamin Cohen/NBC)

In the recent "Psych" season finale, she was tempting, calculating and vindictive.

In this week's episode of "Grimm" she is, well, "I play a little bit of a Cinderella-like role," Schull said. "If you've ever seen 'Grimm,' nothing's the stereotypical fairytale."

"She's Cinderella as you've never seen her," she said.

In other words, Schull, a blond-haired, green-eyed beauty is covered in makeup and prosthetic pieces as part of the sci-fi actioner's storyline.

"It was really interesting. I've never had anything done like that before," Schull said.

"They were very deliberate and very careful with the whole process," she added. "They take a lot of pride in that show."

"It was unique," Schull said. "Every single person in every single department on that show loves what they do, which ends up just making for a wonderful end product. It was really fun."

Schull has had ties to "Grimm," which is nearing its first season finale, since the show's inception.

Schull has been a fan of the genre since she was young.

"I love fairytales, first of all," she said. "My father used to read fairytales. He read to me all of the Brothers Grimm stories as well as Greek mythology before I would go to bed every night. That was my time with my dad, an hour every single night as I was going to sleep."

It was high praise for "Grimm," then, when Schull, so well-versed in the Brothers Grimm, said, "I think they just do it so well."

"Everybody loves their job so much that it's not old, it's not done in a tired -- they're not rehashing anything," she said. "And David and Russell (Hornsby) love their job. They love their work. They love going to work. And so it was enthusiastic and it was exciting, and I think that comes across.

"When I watch it, I love it. Not just because I'm watching a friend of mine, but because you're watching something that's new and fresh, and it's a spin on something that's familiar to a lot of people, which I think is comforting in a way, and then surprising and exciting in so many others."

For Schull, acting was not her first career choice. While studying with the prestigious San Francisco Ballet, she was offered the part of Jody Sawyer, the lead role in "Center Stage." Since then, she has appeared in more than a dozen projects, including Clint Eastwood's "J. Edgar."

"A lot of the same things that I love about acting are the things that I loved about dancing," Schull said. "I get to be somebody different everyday. That's not something most people get to experience. They have their own life: they may love it; they may hate it. But I get to try other people on for size on a regular basis.

"It's so exciting to me. I love sort of the investigatory aspect of it, also. Sort of creating and uncovering different people and why they do the things they do. Even down to their physicality -- why, physically, they are a certain way. What would make somebody behave a certain way? I just think it's fascinating -- just like the human element of being a different person. Especially when I get to be somebody that is completely removed from me -- like a killer, like on 'Psych' or something. That's exciting.

Schull is a guest star on next week's episode of "The Mentalist" on CBS. She'll appear later this year in the independent feature film "180." The psychological thriller also stars Ethan Embry and Lacey Chabert.

While dancing is no longer Schull's main profession, it is still a big part of her life.

"I still take ballet class every week -- sometimes up to four or five times a week, if I have the time for it," Schull said.

She still has friends at the San Francisco Ballet (and keeps up with all of the "juicy gossip").

"I don't dance professionally anymore," Schull said. However, "I'm always going to be a dancer, I think. I think I sort of need to move that way. It's cathartic for me. It's release. As long as I can move, I think I'll be dancing."