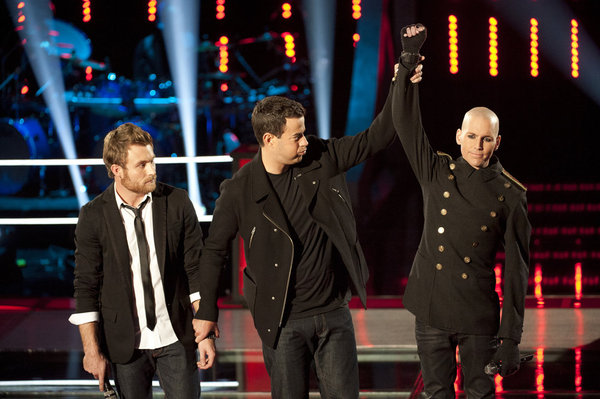 Pictured from "The Voice": Carson Daly congratulates Tony Vincent on a win over Justin Hopkins. (photo by Lewis Jacobs/NBC)

'The Voice': Tony Vincent emerging as one to beat

Among the many talented frontrunners on NBC's "The Voice" -- including Jesse Campbell, Charlotte Sometimes, Jamar Rogers, Juliet Simms and Jordis -- the one performer who may have the most complete package is stage veteran Tony Vincent. He has a unique look, strong vocal talent and an unmatched stage presence.

The 38-year-old singer, a star of Broadway shows including "American Idiot" and "Rent," and the Queen-inspired London musical "We Will Rock You," says his first love is pop-rock. That's no surprise: His musical passion has poured through our television screens with each song Tony has performed.

His coach, Cee Lo Green, called him "one of my best," and backed that statement up by pitting Tony against former "Last Call with Carson Daly" band member Justin Hopkins in the final "Battle Rounds" episode.

"It just really reinforces the fact that I really believe that I'm with the right coach," Tony said. "I think he gets me not just, you know, in an onstage presence, but just what I do stylistically.

"It really reinforces the fact that I know that I'm with the right coach. I think he gets me artistically; he gets where I'm coming from as a sort of theatrical kind of artist, something that is out of the box and large. So I think that's it's unique and interesting, because we were friends as part of this journey started for the both of us, but I also thought that he knew that I could bring it and really (tell) a story in a really communicative way that could connect with the audience."

"You know, one of the things I think I was most impressed about when I had a chance to first start this working relationship with Cee Lo, is just his vast music knowledge," Tony said. "I mean, he has, you know, a huge catalog of music history in his brain, and if you can touch a man from a song that he's probably heard hundreds of times, and actually really bring him to tears in an authentic way. ... I mean, none of that stuff that you saw ... whether it was James (Massone) and Wade, or me and Justin, that was not put on.

"This man is passionate about music. ... Anybody who has that sort of passion towards music is a guy that I want to be associated with."

Tony will perform Monday during the second "Live Performances" episode.

"I'm actually quite glad that this is not singing against someone or dueting, but we, the production caliber gets a little bit larger where there's some extra musicians," he said. "We're introducing some background vocals. It's going to be a little bit more of a really complete kind of solo performance, and that I'm really excited about. Plus, I'm not going to tell you what song I've been assigned, but it's probably one of my favorite bands, so I feel really comfortable taking this next step forward."