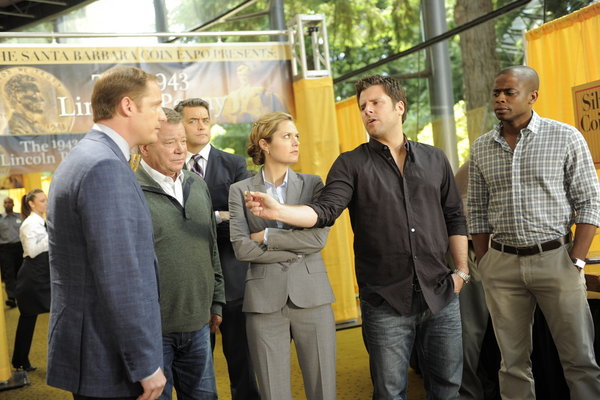 This week's 'Psych' boldly goes ... you know the rest

"I can't say enough about him. He is -- it was incredible. He's a wonderful man," Lawson told me before the season began. "James calls him 'The Terminator' because he just, you can't believe how hard this guy works. And then ... he was playing my dad. For him to come up and take such an interest in me, and to know all of these lines, he's such a pro. He had as many lines as Shawn in the episode.

Shatner is the latest in a series of notable guest stars on "Psych." Just a handful of episodes into this season, fans have already seen turns by Danny Glover ("Lethal Weapon"), Malcolm McDowell ("A Clockwork Orange"), Cory Feldman ("The Lost Boys"), Molly Ringwald ("The Breakfast Club") and Kristy Swanson (the original "Buffy the Vampire Slayer").

"Our guest stars this year, who we had so much fun with, but they're so, so, so good. I feel like we got really lucky; we hit it out of the park with that," Lawson said. "In six seasons, I think you would expect to feel some kind of staleness. And I feel like it's the opposite. We have a new excitement. Every episode was sort of a new adventure. And the episodes are bigger. There are emotional dynamics going on now."

"I think that Tim, this season, has a couple of really, really incredible episodes, where you get to see how great he is as an actor. But also a different side to Lassiter, too. He finds love; he's really, I think, coming into his own as a man that way," Lawson said. "He's so, so good this season, and I can't wait for everybody to see him knock it out of the park. And, of course, the same with James and Dulé. But we see a side of Tim that's going to blow people away a little bit."

"Psych" airs at 10 p.m. on USA. Follow the show online at http://www.usanetwork.com/series/psych/index.html.