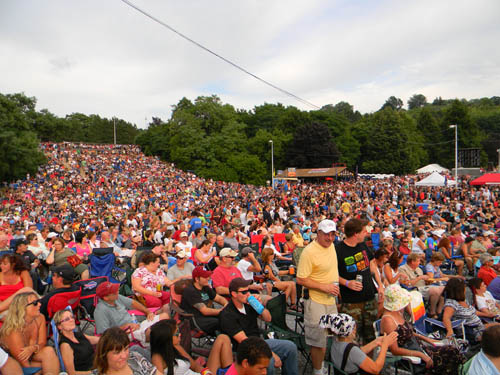 Artpark crowds top 30,000 on consecutive Tuesdays: Is it too much?

Osborne: Artpark has handled large crowds in the past

On July 26, an estimated 30,000 people attended the free Lynyrd Skynyrd concert at the South Fourth Street performing arts venue. It was the largest recorded crowd at Artpark and, in one night, came close to the annual attendance of the two-day Jazz Festival or the two-day Art Festival.

The milestone lasted all of a week before it was erased. About 31,000 concertgoers ventured into Artpark to watch ZZ Top perform on Tuesday.

"It was overrun, really," Collesano said following the Skynyrd show. "We just cannot handle that amount of traffic in this little village."

He reiterated that point following the ZZ Top show this week.

"It is too much, really," Collesano said.

Soluri, who rides around with the Lewiston Police Department on "Tuesday in the Park" nights, said the crowd size is "taxing" officers.

He said police and Artpark security forces are "absolutely" outmanned when the crowd size stretches past 15,000. Even with extra officers the past two weeks (about 40 total), Soluri said safety teams are "way under" what's typically required for that amount of people.

"We've been very fortunate (no serious accidents have occurred)," he noted.

Still, "The health, safety and quality of life is starting to be affected by these crowds," Soluri said.

Collesano said 30,000 people is good for business, but at a cost to the village.

"If you talk to the restaurants, each and every one will tell you they did fantastic," he said. "The people were orderly. But, the village just cannot handle that amount of traffic."

Part of the problem is the migration of concertgoers from the Artpark parking lots (which charge motorists $8 on the plateau and $10 on the main grounds) to village streets. Coupled with this year's local law prohibiting parking on one or both sides of the roads closest to Artpark, and motorists have spread into plazas and onto other open streets - as far away as Chicora Road in the Town of Lewiston.

The end result is a two-hour window (from about 9 until 11 p.m.) with traffic exiting the village from every possible angle.

"Our village streets are not designed to handle that amount of traffic in such a short time," Soluri said.

Artpark & Co. has made several adjustments in the past six seasons as a result of community input, and President George Osborne said that trend would continue this year.

In the first two years after the venue's management began booking top-name national acts in 2004, complaints arose about patrons walking on private property - or doing other things on residential lawns - and the noise emanating from the outdoor amphitheater. Artpark officials adjusted the sound levels and speaker configurations to handle the latter, while the LPD increased patrols in the village to discourage the former.

Following the 2009 and 2010 seasons, residents voiced concern over the length of time it took to clear the Artpark parking lots and move traffic out of the village. Subsequently, the village made South Fourth Street one-way following "Tuesday in the Park" concerts, and opened a new Robert Moses Parkway on-ramp off Seneca Street. The total effect was access to the roadway from three different directions.

Osborne said his staff purchased the village's "no parking" signs and spends between $4,000 and $5,000 extra each week on additional safety measures - including more yellow-shirted security guards.

He acknowledged, "There are some concerns about how many people we can accommodate" following the back-to-back record-breaking weeks. But, he also said village officials need to put these shows in perspective.

"There wasn't a substantial difference between (those two crowds) and Styx," Osborne said. "We've had crowds close to this size before."

Styx drew about 25,000 in 2006, while The Doobie Brothers had about that many last year. Since 2005, concerts featuring Foreigner (twice), Peter Frampton (twice), Pat Benatar (twice), Michael McDonald and Kenny Loggins have drawn between 15,000 and 20,000 people.

"This is an overreaction to a big crowd. Period," Osborne said. "That's my opinion."

Osborne and Collesano both said discussions would take place this winter to assess Artpark's plans for the 2012 season.

Collesano and Soluri have suggested curtailing the crowds. Osborne said his team has "cooperated all along" with the village, but final decisions are "going to be made primarily by Artpark & Co. and New York State Parks."

At this point, Osborne said it's nearly impossible to keep pedestrian traffic out of the park on concert nights. However, when Artpark & Co. receives permission from state parks to build a new amphitheater, then a limit could be placed on total attendance.

As part of Artpark & Co.'s $4 million master plan, the outdoor amphitheater would be relocated, the 10 buildings surrounding the bowl would be torn down, and patrons could spread out more than they can now.

Moreover, Osborne said Artpark & Co. would add a gate, thus allowing it to cap crowds if and when staff deemed that prudent.

"I think that's where we're going, but that's (an Artpark) board decision," he said.

Osborne expects amphitheater changes to begin this fall en route to "substantial improvements" for next summer.

None of the remaining 2011 concerts are expected to draw 20,000 or more people. Based on the track record of their peers (and previous Artpark appearances), rock acts Edgar Winter, Ted Nugent, George Thorogood & the Destroyers, The Machine performs Pink Floyd and Gregg Allman (on a Wednesday) are expected to net between 10,000 and 15,000 respectively.