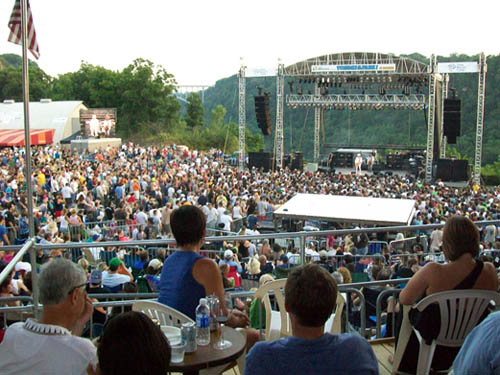 Record crowds are expected for the July 26 and Aug. 2 Artpark concerts.

Massive crowds are nothing new to Artpark & Co.

The non-for-profit organization, which operates the performing arts venue inside the Village of Lewiston state park, has produced at least a half-dozen shows with audiences exceeding the 20,000 mark since recommitting to its free, outdoor concert series in 2004. Typically, Artpark's "Tuesday in the Park" draws between 8,000 and 12,000 music lovers each week.

The next two "TIP" acts, however, are far from typical. Headliners Lynyrd Skynyrd (tonight) and ZZ Top (Aug. 2), two bands that normally command big-ticket prices, will perform for free.

The audience for each show, "could be 40,000. We don't know," Artpark & Co. President George Osborne said. "I don't believe there's ever been anything like that in Lewiston (at one time)."

With no rain in the forecast for either Tuesday night, and two Rock and Roll Hall of Fame acts on stage, the Village of Lewiston is bracing itself for a never-before-seen influx of people.

"The next two weeks, there's going to be a lot more people - we know that," said Mayor Terry Collesano. "We're beefing up security. ... Hopefully, things will go smooth."

Lewiston Police Chief Chris Salada said his entire department will be on duty to monitor activity inside the park and within the village and its neighboring town. As usual, New York State Parks Police, state troopers, Niagara County Sheriff's Office deputies, Niagara County Auxiliary Police, and U.S. Coast Guard members will join his staff in crowd control and traffic operations. For the Lynyrd Skynyrd and ZZ Top concerts, Salada has recruited seven additional police officers (six from the Town of Niagara, and one from the Village of Youngstown).

"Everybody will have a little section of the village to cover," Salada said. He noted police forces would be on foot, in patrol cars, on bikes and on horses. "We're not going to tolerate (items such as open, off-site alcohol containers or marijuana)," he said.

Inside the park, "We've increased security by 30 percent," Osborne said. His guards will work on keeping aisles open and concertgoers calm.

"I don't anticipate any particular problems," he said.

Artpark & Co. pulled its regular Tuesday children's activities for the next two weeks as a precautionary measure. In the play area's place will be a big-screen television for concert attendees unable to see the stage, as well as extra washrooms and drink vendors.

"It's going to be a prime viewing area," Osborne said.

The mayor is optimistic the concerts - and the anticipated record crowds - will provide a prime view of the local community.

"There's a lot to offer in the Village of Lewiston," Collesano said.

"I think every time you bring people in who have never been here, you give them the opportunity to see what's here," Osborne said.

He said the restaurant "definitely gets a good crowd no matter what." But, when bigger acts perform at Artpark, "People come into town a little earlier. Our dinner rush starts a little earlier."

Down on the other end of Center Street, Water Street Landing General Manager Matthew Ott said, "It's great to have some big names like that in the village. I'm excited to see how the traffic pattern (works)."

Ott's restaurant has "definitely noticed an increase in business this year," as a result of previous Artpark acts such as Creedence Clearwater Revisited, Pat Benatar, Peter Frampton and Cheap Trick.

Over the next two weeks, "We're expecting the overflow from (the bigger crowds)," he said.

Jamie Symmonds, owner of Angel to Apple Clothing Boutique, said, "I get a lot of people (shopping on concert nights)," since moving closer to Artpark in 2010. "There's definitely a difference"

Osborne said it's all hands on deck for the next two weeks.

"We're calling in everyone early," he said. "You've got to be ready. We don't know what to expect."

Though not much of a rock fan, himself, Osborne said, "These two bands were way up on my list (to book) for a long time."

"I actually happen to like Lynyrd Skynyrd," he said. "I'd like to sit down and watch the show, but I can't, because there's no place to sit!"

"Tuesday in the Park" begins at 6:30 p.m. For more information, check out our Artpark Page or visit www.artpark.net.