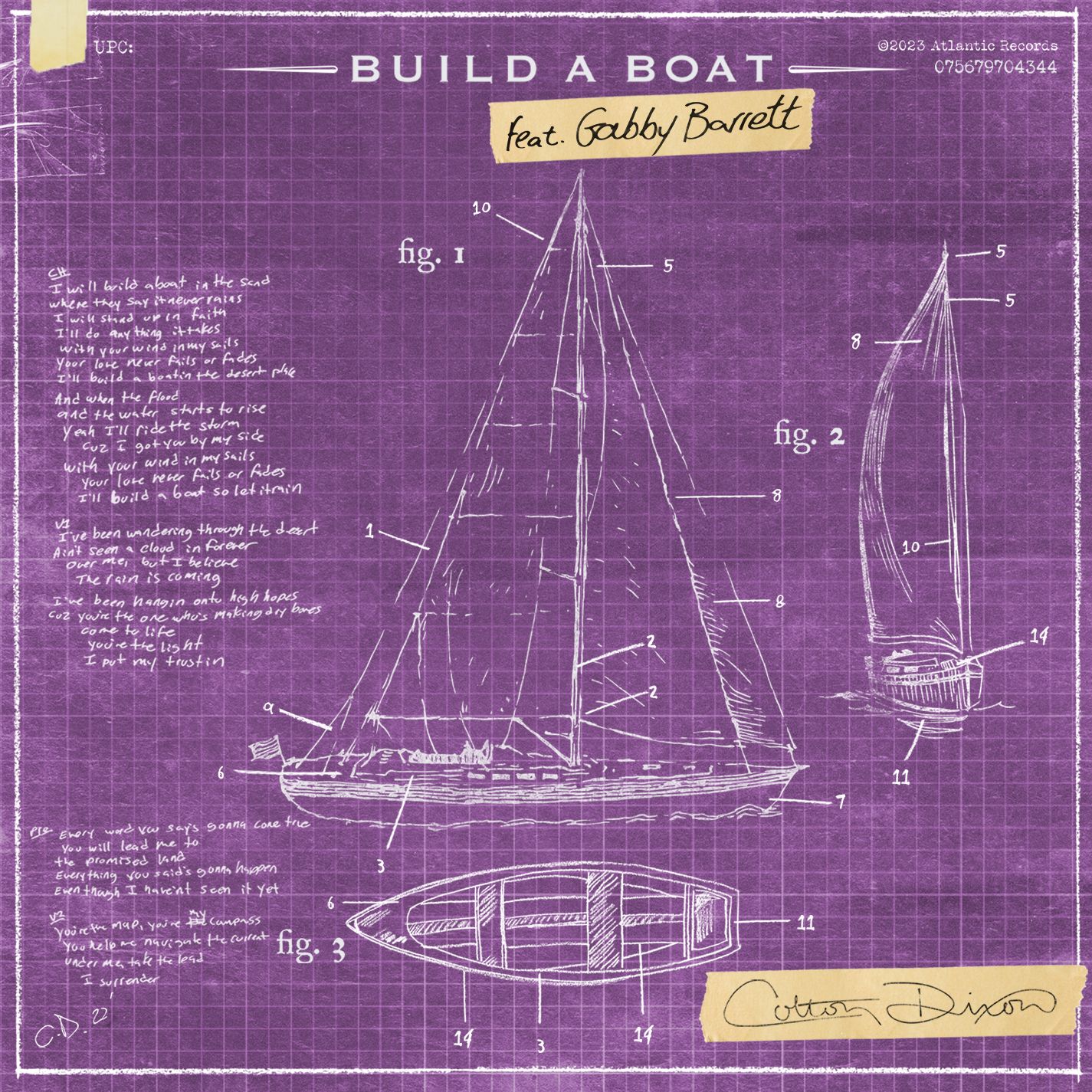 Colton Dixon's "Build A Boat" has truly found an anchor at radio. No. 1 for 10 weeks, the track was also the longest-running No. 1 Mediabase Christian AC song of 2022. On Jan. 27, a brand-new version of the song, "Build A Boat (feat. Gabby Barrett)" will be available, featuring multi-Platinum and award-winning country star Gabby Barrett. Presave the track HERE.

“I respect Colton’s creativity as an artist and was already a big fan of ‘Build A Boat’ before he reached out to collaborate,” Barrett shared. “These lyrics really hit me, and it’s such a blessing to be a part of this new version and to be able to honor our Lord in this way."

Equally excited to have Barrett join him on what's become the biggest song of his career, Dixon commented, “I'm so honored to have a fellow ‘American Idol’ alum, Gabby Barrett, join me in spreading the message of faith and perseverance through my song 'Build A Boat' – what a great way to kick off the year!"

Dixon will be touring across the U.S. this spring on his "Build A Boat Tour" featuring Jordan St. Cyr and special guests Apollo LTD. Hitting approximately 35 cities, the tour will kick off March 10 in Bedford, New Hampshire. Tickets are now on sale at ColtonDixon.com.

Per the press release:

Colton Dixon quickly became a household name in 2012 when he was voted a fan favorite and made it to the top seven on season 11 of FOX’s (now ABC’s) hit show “American Idol.” His career has been on the fast track ever since, now boasting over 100 million streams across all platforms.

Dixon's 2013 debut, “A Messenger,” set the record for biggest first-week sales by a new solo Christian act, becoming the No. 1 selling album by a new Christian artist.

Dixon is also a Steinway & Sons artist, following in the footsteps of legendary artists such as Harry Connick, Jr. and Billy Joel.

Dixon's sophomore effort, “Anchor,” included the most-played Hot AC single of 2014, “More Of You," which spent three weeks at No. 1, as well as "Through All of It," his fourth consecutive No. 1 at Hot AC Radio. In 2013, Dixon won a Dove Award for Best Rock/Contemporary Album Of The Year, along with two additional nominations. In 2015, Anchor was honored with the Dove Award for Rock/Contemporary Album of the Year. Dixon received back-to-back K-LOVE Fan Award nominations for Male Artist of the Year in 2014 and 2015, followed by the release of his third studio album Identity, which included the top 5 single “All That Matters,” whose video was premiered by PEOPLE magazine.

His critically acclaimed self-titled EP, which boasts the hit tracks "Miracles," "Devil Is A Liar," and “Made to Fly," is available now, along with his latest hit single, "Build A Boat."

Breaking out with her top-streaming Platinum album, the wildly praised collection launched her meteoric seven-times Platinum “I Hope” – the most-streamed country song of 2020; four-week Hot AC No. 1 crossover “I Hope (feat. Charlie Puth)” – which earned the iHeartRadio Titanium Award for reaching over 1 billion radio spins; and three-times-Platinum, three-week No. 1 “The Good Ones.”

Ruling the Billboard Hot Country Songs chart for a record-breaking 27 weeks, “I Hope” was the first debut single by a solo female artist to top the country radio charts since 2017, and made her the youngest artist with a No. 1 debut at country radio in over two decades. Honored at Billboard Women in Music 2022 with the Rising Star Award presented by Honda, she also co-hosted the 57th Academy of Country Music Awards.

Adding even more elite wins to her goldmine of accolades from Billboard Music Awards, iHeartRadio Music Awards, and CMT Music Awards, Barrett was recognized as one of the five 2021 CMT Artists of the Year. The most-nominated country music female at the 2021 American Music Awards, she earned Favorite Country Album (“Goldmine”) and Favorite Country Song (“The Good Ones”). In addition, she’s among Country Radio Broadcasters’ 2022 New Faces of Country Music; Billboard’s Top New Country Artist of 2020; an Amazon Music Breakthrough artist; one of Forbes’ “30 Under 30 in Music”; and touted in Variety’s 2020 “Young Hollywood Impact Report.”

Co-host of the 12th annual holiday special, “CMA Country Christmas,” the powerhouse vocalist continues to prove herself as a dynamic entertainer, touring with Jason Aldean, Brooks & Dunn, and Kane Brown.