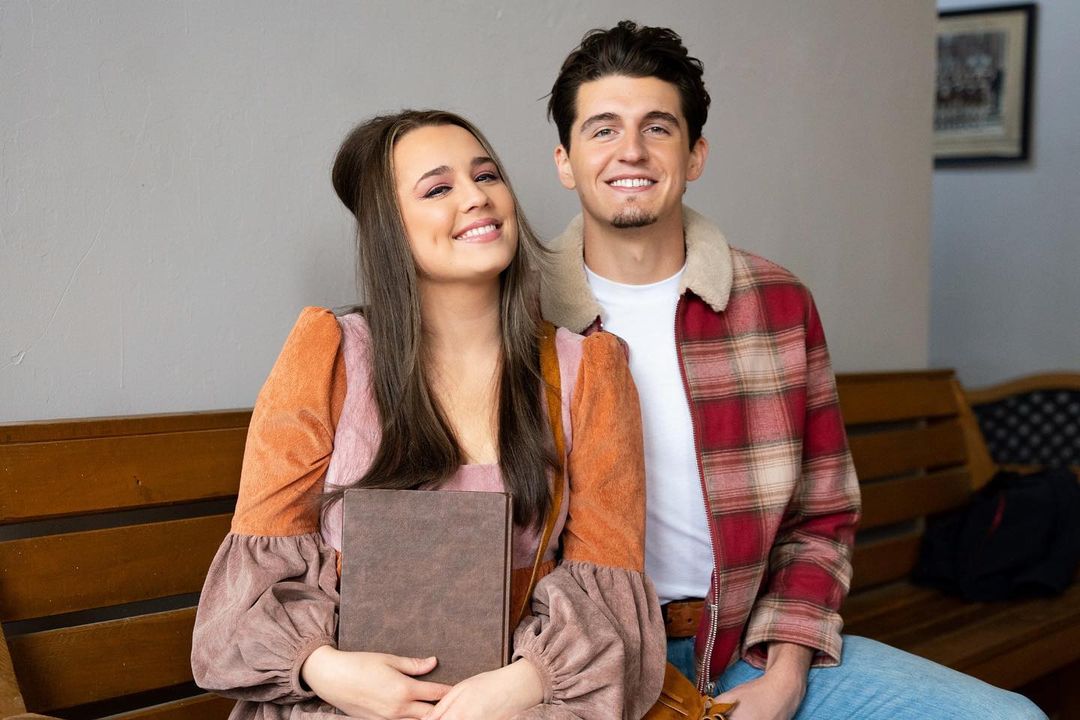 Gabby Barrett and her husband, Cade Foehner, on the set of her new music video, "Pick Me Up." (Image courtesy of Sweet Talk Publicity)

Q&A: Gabby Barrett is, in fact, 'One of the Good Ones'

Though no one knew who Gabby Barrett was five years ago, she knew herself – what she believed in, what she was capable of, and what she could accomplish if given the right platform.

When she auditioned for ABC’s 2018 reboot of “American Idol,” she immediately became both a favorite with judges Luke Bryan, Katy Perry and Lionel Richie, and with the millions watching at home. With her dad by her side – sporting a “GB” hat – and remarkable stage presence, Barrett was arguably the show’s most ready-made contestant. Wherever she would finish – ultimately in third place – it was obvious Barrett was going to be a country music megastar.

Sure enough, upon leaving the show and heading to Nashville, Barrett quickly found success.

Her 2020 debut album, “Goldmine,” just about knocked country radio on its head. The Platinum-selling record was highlighted by the six-times-Platinum hit “I Hope” – the genre’s most-streamed song of the year, which also topped Billboard’s 2020 year-end Hot Country Songs, Country Digital Song Sales and Country Streaming Songs charts. Barrett’s team said the song, “after reigning at No. 1 for 27 weeks, made history with the longest-running No. 1 by an unaccompanied female artist since the chart’s 1958 inception, and the third-longest-running No. 1 of all time.”

Crossover mix “I Hope” feat. Charlie Puth hit No. 1 on the AC chart, went to No. 3 on the Billboard Hot 100, and claimed an iHeartRadio Titanium Award for reaching more than 1 billion radio impressions.

“The Good Ones,” which Barrett sings about her husband – fellow “American Idol” finalist Cade Foehner – went two-times “Platinum.” By popular demand, Barrett released a stripped-down wedding version. You’ve probably heard it at one or two or several-dozen ceremonies.

Barrett has taken home so many awards for “Goldmine” that her house practically is one.

A 17-song deluxe edition has no less than 15 songs in which Barrett has songwriting credit.

She co-hosted the 57th Academy of Country Music Awards alongside Dolly Parton and Jimmie Allen, and returned to “American Idol” last spring to serve as a mentor to the top 14.

Barrett, now 22, and seven months pregnant with her and Foehner’s second child – following Baylah May, who was born 19 months ago – is touring with Jason Aldean. She will perform at Darien Lake on Saturday as part of the “Rock N’ Roll Cowboy Tour.”

Though the performer has appeared in myriad national news outlets, on TV talk and award shows, and has 2 billion streams, she remains kindhearted and humble. Barrett explained what keeps her feet on the ground in this edited Q&A. 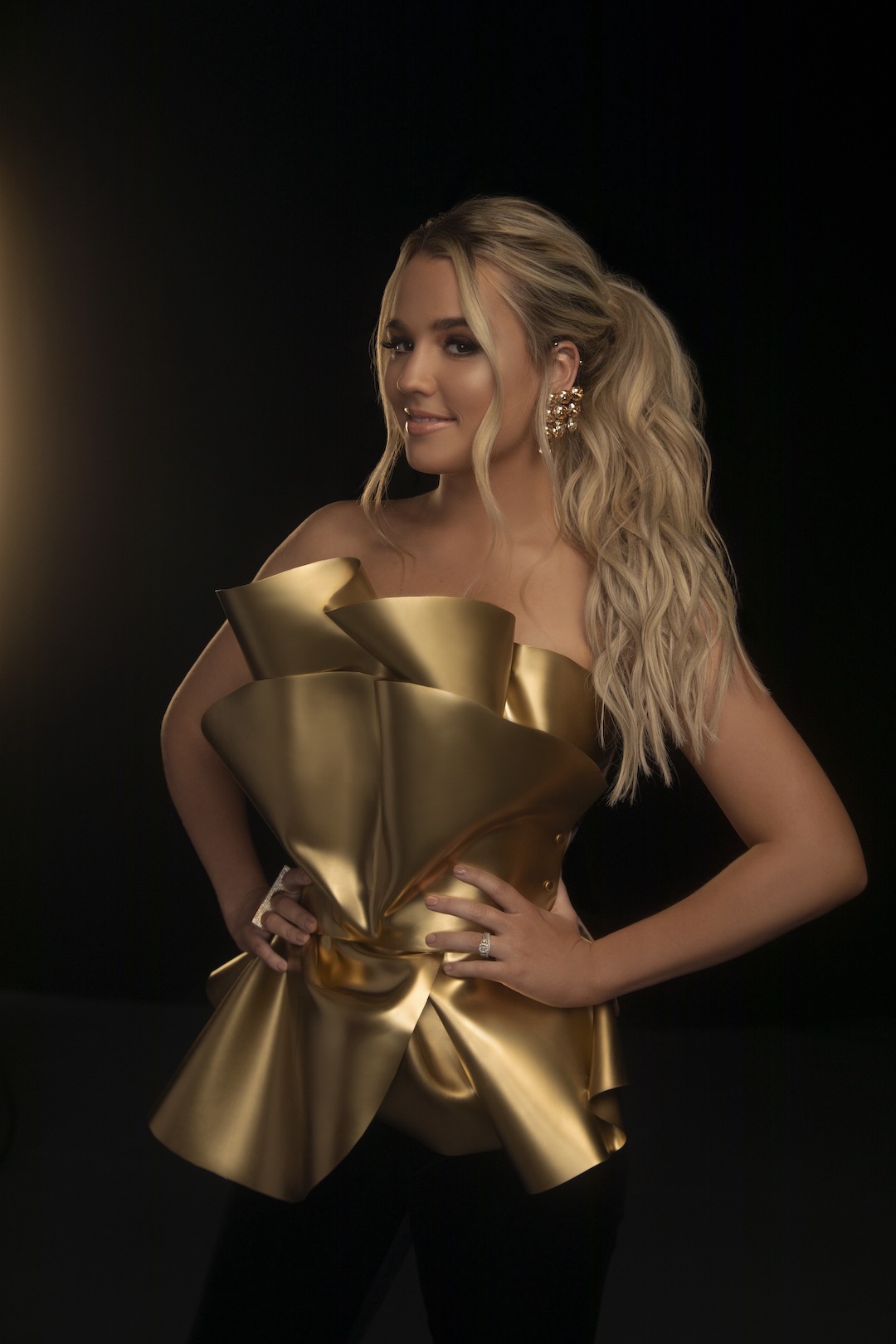 Q: You are, of course, performing with Jason Aldean. What can you tell me about him and how that relationship came to be?

Gabby Barrett: Well, I'm very thankful that Jason and his team originally reached out and wanted us to be a part of the tour. He's obviously somebody that I've listened to during my whole childhood, growing up, on the radio; and always enjoyed his style and take on rock mixed with country.

He's been wonderful. His team's been great. He’s been super-duper nice. So, definitely excited to continue to keep that friendship blossoming, for sure.

Q: I have to say, I'm so impressed with the resume you've put together over the past couple of years. I find it to be remarkable. The fact that you have already conquered country music, you crushed “American Idol,” you are a wife, a mother. As I said, it’s pretty remarkable. And from what I've learned, you are a remarkable person – it's not just your accomplishments. I'm wondering what molded you into this person – and what enabled you to have this level of success in such a short period of time?

Gabby Barrett: Thank you for all those compliments; I appreciate it very much.

Goodness, I certainly have just come a very long way. I have been performing for quite a long time, originally starting from nothing. I mean, I started vigorously touring when I was about 11 years old – started really singing when I was 9. And I just went kind of everywhere for many years, wherever I could possibly go. It was me and my dad and sister that would just go everywhere. And so, I was just touring, singing in grocery stores and malls, and, oh gosh, fairs, small restaurants. I’ve literally sang in the corner of a Chick-fil-A before. I was just singing and going and doing as much as I possibly could.

I'm originally from Pittsburgh, Pennsylvania, and I have two very hard-working parents who have always had multiple jobs my entire life. So, I think my parents definitely instilled a hard-working characteristic in myself, as well, and I don't take things for granted. And I know that people would die to be doing what I do, and be able to do this job.

And then going on “American Idol,” and then coming off of “Idol,” it wasn't easy, again, getting back into the music industry, like in Nashville, and really building a team.

It hasn't been easy, but I appreciate and loved all the bumps along the way, because that's what really helped me to get here, as well as the Lord just having his hand over my entire life and career, and blessing me enormously.

Q: We saw your journey on “American Idol.” And I think that you, seemingly, were the most prepared of any of the contestants we've seen. The most well-suited for that stage, and for what would come next. As I said, you have gone on from there, and you've been extremely successful in country music. So, now you're on the other side of that climb up the hill, if you will.

If I look at your Instagram page, it says, follower of Christ, it says wife, it says your husband's name, it says mama, country singer. How do all of these things today shape you as a person and as an artist?

Gabby Barrett: Well, anybody that’s a fan of myself and my husband, they would know that we're very faith-based people; that we love the Lord Jesus very much. And we do really base our life around the Bible. And so, we are big followers of Christ, and really do what we do to glorify God and the gifts that he's given us. I think he's gifted me with a voice. And I think he's gifted my husband in other ways, which is why we do music together.

And our family is a big centerpiece to everything. That's why my daughter comes out on the road with us, and we're having kids, and we're going on tour, and we're enjoying life through that lens. So, I think all of that connects. It's very God-centered and oriented into the family, and we're just enjoying his blessings.

Q: All of these things you've mentioned – does it make it easier for you to wrap your brain around the fame, the fortune, the billions of streams you've accomplished over the past couple of years? Does that make it a little bit easier to be grounded?

Gabby Barrett: Absolutely, yeah! I just try to center myself and to remember why I do all the things that I do. And it is, again, to glorify the Lord.

It's pretty wild to me always seeing numbers, or awards, or award shows that I get to be a part of. And I just remember so vividly, where I started, where I came from, and where I was at for so many years. Like I said, like sitting in the corner of a Chick-fil-A (laughs). It's a really, really cool view when you get to step back and look at everything, for sure.

Q: For the people who may be coming to see you perform for the first time this weekend, what can you tell me about your live show?

Gabby Barrett: We’ve worked really hard on the live show. I always like to involve elements on the stage, in the entertainer sense of things, that maybe people aren't, or haven't brought yet to country music, specifically. And just to keep things fresh and new and, you know, make your show unique to you and everything like that.

We have a pretty cool set. Our set’s about 45 minutes, and we have new originals, a couple older originals, we have my first No. 1, second No. 1, all of that.

The way that it's set up is just very neat. People normally have a good time – from what it looks like – at the show. So, I'm excited. And hopefully New York is, too. 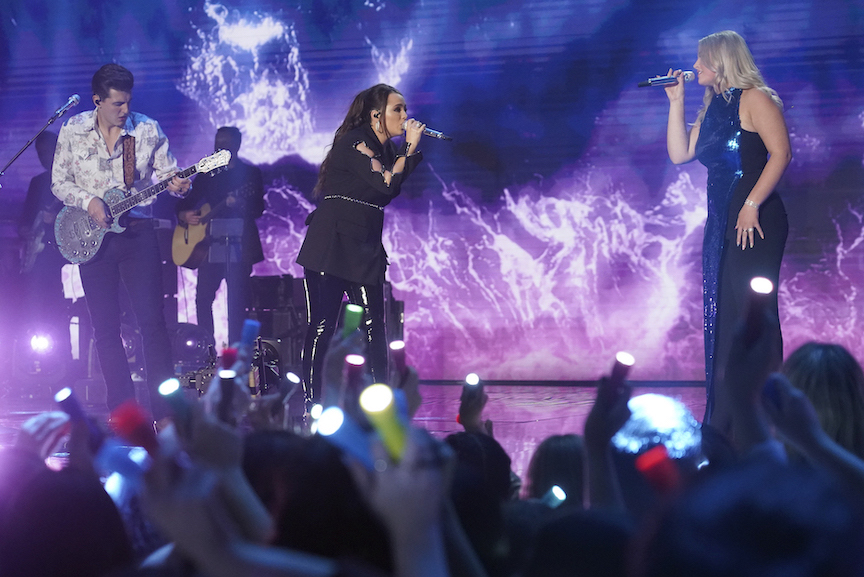 Gabby Barrett and Cade Foehner perform alongside Emyrson Flora on the grand finale of season 20 of “American Idol” on ABC. Barrett served as a mentor for the top 14. (ABC photo by Eric McCandless)