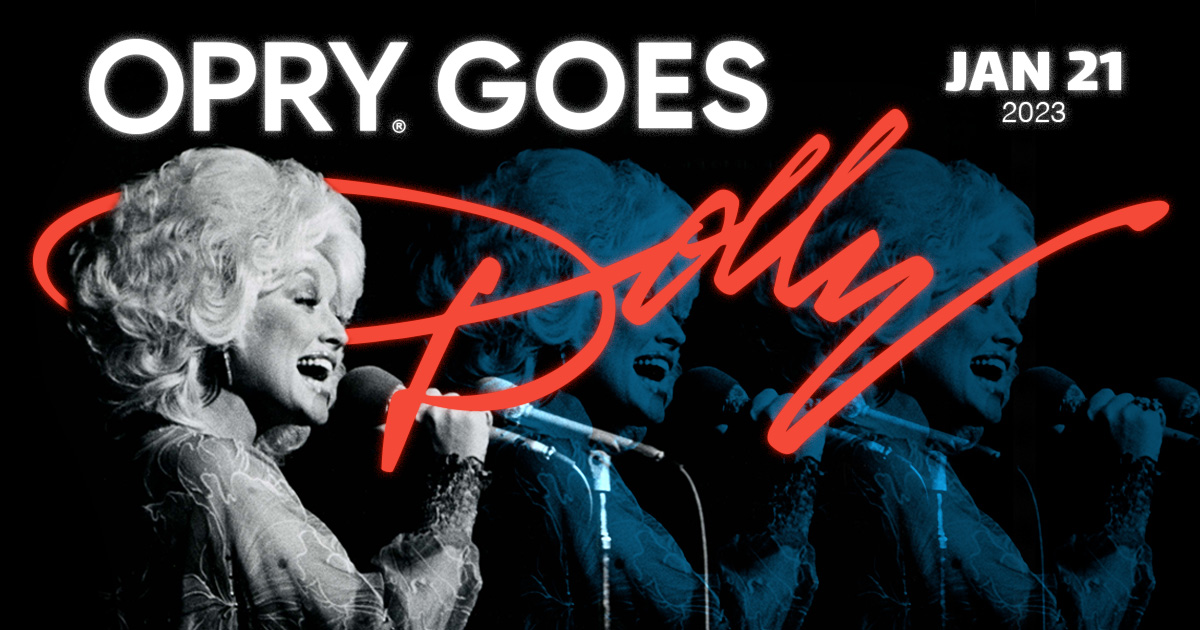 Opry has returned to The Ryman Auditorium for January run

The Grand Ole Opry is about to “Go Dolly” in celebration of arguably country music’s greatest global ambassador – and an artist who has taken the Opry with her wherever she’s gone. The Opry plans to celebrate Dolly Parton’s 77th birthday (the superstar’s favorite number), which falls on Jan. 19, through two shows including Dolly tributes and other fun on Saturday, Jan. 21.

Keeping with the “77” celebration, the Opry is set to spotlight hits from Parton’s 1977 album “Here You Come Again,” Parton’s first Platinum album and a crossover smash. Among those scheduled for the Jan. 21 shows are Chapel Hart, The Fairfield Four, Caitlyn Smith, Marty Stuart and Chris Young. Beginning today, $5 from every ticket sold to both of the Jan. 21 shows will be donated to the Opry Trust Fund in Dolly’s honor. For more than 50 years, the fund has assisted members of the country music community in need.

Among other plans in celebration of Dolly’s 77th:

√ A Dolly impersonator on the Ryman plaza for photo during Jan. 21 “Opry at the Ryman” shows

“We love an Opry party and everyone around the world loves Dolly!” said Opry Executive Producer Dan Rogers. “Though Dolly herself can’t be with us this year due to her feature film schedule, I think we can all agree Dolly deserves to be celebrated this year and every year. We’re going to have some fun Dolly additions to the great schedule of shows lined up for our January run downtown at the Ryman.”

The Opry returns to the Ryman Auditorium this month for a special one-month run before returning to the Grand Ole Opry House in February. Among the artists scheduled to appear during the month include Bill Anderson, Lauren Alaina, Terri Clark, Vince Gill, Carly Pearce, Ricky Skaggs, Marty Stuart, Rhonda Vincent, Mark Wills and Chris Young, as well as guests including Chapel Hart, The Fairfield Four, Maggie Rose and Charlie Worsham. A second show has been added to the schedule for both Jan. 21 and 28.

To purchase tickets for “Opry at the Ryman,” go to Opry.com. Tickets are on sale now for all shows through August at 615-871-OPRY and opry.com.

A press release explained, “Dolly Parton is the most honored and revered female country singer-songwriter of all time, and recently inducted into the Rock and Roll Hall of Fame.

“Achieving 25 RIAA-certified Gold, Platinum, and multi-Platinum awards, she has had 26 songs reach No. 1 on the Billboard country charts, a record for a female artist.

“Recently, Parton reached No. 1 on the Billboard Christian Airplay Chart for the first time for her duet with Grammy award-winning Zach Williams of ‘There Was Jesus,’ for which they won a Grammy that year, making that her 11th Grammy win. She received her first Dove Award for short form video for her collaboration with for KING & COUNTRY on the song ‘God Only Knows.’

“Parton is the first artist to have topped the Billboard's Adult Contemporary, Christian AC Songs, Hot Country Songs, Christian Airplay, Country Airplay and Dance/Mix Show Airplay radio charts. Parton recently became the first country artist honored as Grammy MusiCares Person of the Year given out by NARAS. She has 48 career Top 10 country albums, a record for any artist, and 110 career-charted singles over the past 50-plus years.

“In 2014, the RIAA recognized her impact on recorded music with a plaque commemorating more than 100 million units sold worldwide. Her 2016 No. 1 album, ‘Pure & Simple,’ which topped the Billboard top country albums and Americana/folk albums charts and debuted at No. 1 in the U.S., Canada, U.K. and Australia, added to that massive tally. She has garnered 11 Grammy Awards and 51 nominations, including the Lifetime Achievement Award and a 2020 win with for KING & COUNTRY for their collaboration on ‘God Only Knows’; 10 Country Music Association Awards, including Entertainer of the Year; five Academy of Country Music Awards, also including a nod for Entertainer of the Year; four People's Choice Awards; and three American Music Awards. In 1999, Parton was inducted as a member of the coveted Country Music Hall of Fame.

“In 2020, she released the Christmas album ‘A Holly Dolly Christmas,’ which went No. 1 on the Billboard country and holiday charts, as well released the bestselling coffee table book ‘Songteller: My Life in Lyrics.’ In 2021, she won an Emmy Award for Outstanding Television Movie for the film ‘Dolly Parton's Christmas on the Square,’ and (last) December (she released) on NBC an all-new original holiday movie called ‘Dolly Parton's Mountain Magic Christmas,’ which she is starring in as well as producing.

“To date, Parton has donated over 197 million books to children around the world with her Imagination Library. Her children's book, ‘Coat of Many Colors,’ was dedicated to the Library of Congress to honor the Imagination Library's 100 millionth book donation. In March of 2022, Parton released the book ‘Run Rose Run,’ which she co-authored with James Patterson, which sat at No. 1 on the New York Times Bestseller's List for five weeks – a record for this decade. She also released an accompanying album of the same name with original songs inspired by the book, which reached No. 1 on three charts simultaneously: country, Americana/folk and bluegrass albums.

“From her ‘Coat of Many Colors’ while working ‘9 to 5,’ no dream is too big and no mountain too high for the country girl who turned the world into her stage.”

The Opry presents the best in country music live every week from Nashville. The Opry can be heard at opry.com and wsmonline.com, SiriusXM “Willie’s Roadhouse,” and its flagship home, 650 AM-WSM, with Saturday night shows seen on the Circle Network. The Grand Ole Opry is owned by Ryman Hospitality Properties. For more information, visit opry.com.