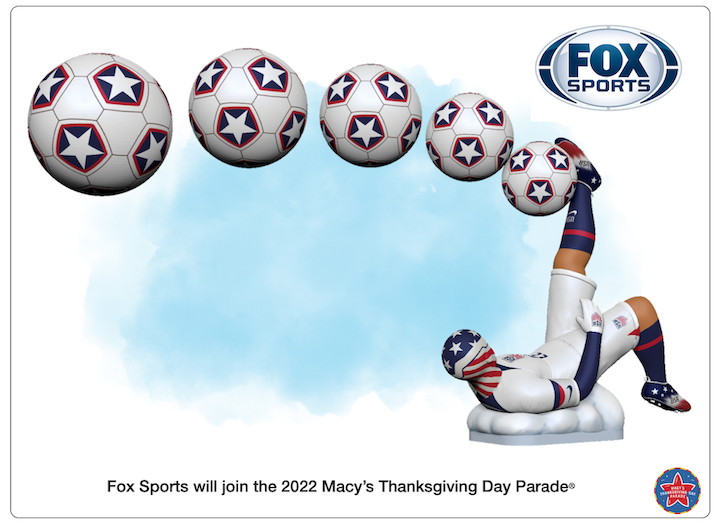 A press release said, “Going toe-to-toe with New York City’s skyscrapers in stars and stripes, this awe-inspiring creation celebrates the U.S. Men’s National Team (USMNT) returning to the tournament taking place Nov. 20-Dec. 18 across FOX Sports’ platforms. The balloonicle debuts on the eve of the must-see Black Friday matchup between the USMNT and England (2 p.m. ET) on FOX.

“Macy’s Thanksgiving Day Parade and the FIFA World Cup have each existed since the early 1900s, both steeped in beloved tradition. Measuring 25-feet long, 25-feet tall, and 10-feet wide, this completely unique parade addition is both a “balloonicle” (a Macy’s Parade hybrid vehicle and cold-air inflatable balloon), and string of helium balloons expertly strung together to create a bicycle kick – one of the most iconic maneuvers in soccer. The resulting creation perfectly emulates the physical skill players possess in celebration of the FIFA World Cup. After all, both holidays and sports have the power to unite people.

“As this is the first time the FIFA World Cup will take place during the holiday season, Striker gives sports fans a pop culture moment to cheer for alongside friends and family.”

Whit Haskel, senior vice president, brand marketing, FOX Sports, shared his enthusiasm for a presence in the iconic Macy’s Thanksgiving Day Parade: “For decades, the FIFA World Cup and the Macy’s Thanksgiving Day Parade have brought smiles to countless people across the globe. FOX Sports is proud to call-in Striker, the U.S. Soccer Star, to celebrate the beautiful game with fans around the world this holiday season.”

From Sunday, Nov. 20, through Sunday, Dec. 18, FOX Sports will present all 64 FIFA World Cup Qatar 2022 matches live across FOX and FS1 with every match live streaming on the FOX Sports app. “Breakfast, lunch and winners” (8 a.m., 11 a.m., 2 p.m. start times) for the month-long frenzy of matches will provide fans with a new morning routine through the Round of 16.

The Macy’s Thanksgiving Day Parade will air nationwide in the U.S. on NBC and stream on Peacock on Thursday, Nov. 24 (9 a.m. to noon), in all time zones.