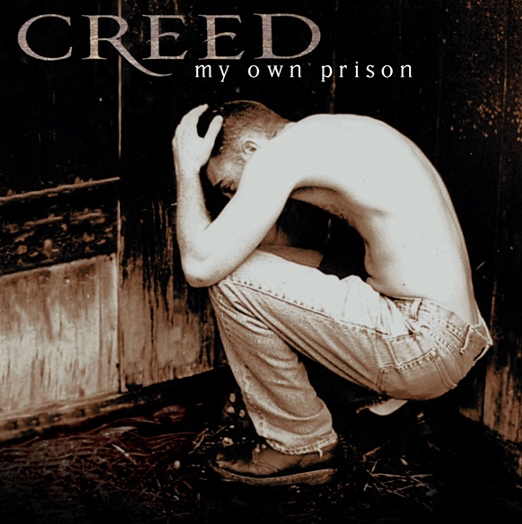 On wax for very first time, album will be available in variety of limited-edition colors at select retailers

Craft Recordings is celebrating the 25th anniversary of Creed's best-selling debut, “My Own Prison,” with the album's first-ever release on vinyl. Landing in stores Dec. 2 and available for preorder today, the multi-Platinum-selling hard rock classic features the chart-topping hits "Torn," "What's This Life For," "One" and "My Own Prison."

In addition to a wide release on classic black wax, fans can also find the album in a variety of limited-edition, exclusive variants, including opaque orange (via Revolver), metallic silver (Walmart), and root beer vinyl, available only on Craft Recordings official webstore.

Released in 1997, “My Own Prison” marked the beginning of a rarified journey for Scott Stapp (vocals), Mark Tremonti (guitar), Brian Marshal (bass) and Scott Phillips (drums). Formed in Tallahassee, Florida, in 1994, Creed was the brainchild of longtime friends Stapp and Tremonti, who first started writing together while attending Florida State University. Soon, the group gelled into a four-piece and set up shows around the city.

It was at one of those gigs that Creed caught the ears of club owner and artist manager Jeff Hanson, who began working with the talented band. Hanson paired the group with producer, songwriter and musician John Kurzweg, who recorded “My Own Prison” in his home. The self-released album became a hot commodity at local radio stations, selling more than 6,000 copies within its first month. Before long, Wind-Up Records discovered the young act – promptly signing the band and remixing “My Own Prison” for wide release.

Stylistically, the album was influenced by Stapp and Tremonti's favorite groups: from classic rock acts like Led Zeppelin and The Doors, to the heart-felt arena rock of U2, and the full-out thrash metal of Slayer and Metallica. Lyrically, however, “My Own Prison” found Stapp and Tremonti inspired by their own lives and personal struggles. The title track, for instance, was based on Stapp's troubled years as a teenager – and his realization that he needed to take responsibility for his actions. The cathartic "Torn" found Tremonti reflecting on the difficulties that he faced as a young adult, while "What's This Life For" was based upon a close friend who took his own life. The duo also tackled broader issues, including the divisiveness of modern society in "One."

“My Own Prison” was reissued by Wind-Up in August 1997 – just two months after the group's self-released version. Over the following year-and-a-half, the band's profile grew exponentially, as did sales of “My Own Prison,” which first topped Billboard's Heatseeker albums chart in November and peaked at No. 22 on the Billboard 200 in May 1998.

All four singles from the album, meanwhile, would have chart success, including "My Own Prison," "One" and "What's This Life For," which all broke the Top 10 of Billboard’s alternative and mainstream rock charts. The title track also landed in the Canadian Top 50, while "One" entered the Billboard Hot 100. “My Own Prison” would later be certified six-times-Platinum and – boosted by the global success of Creed’s sophomore album, 1999's “Human Clay” – topped Billboard's year-end top pop catalog charts in both 2000 and 2001.

With the massive popularity of “My Own Prison” and the Diamond-certified “Human Clay,” Creed would become the first band ever to have seven consecutive No. 1 singles on Billboard’s Hot Mainstream Rock Tracks chart. Their rise continued with 2001's “Weathered,” which debuted at the top of the Billboard 200 and produced the Top 10 hits "My Sacrifice" and "One Last Breath."

While Creed announced their breakup in 2004, they briefly reunited in 2009 to release “Full Circle.” Proving the band's enduring popularity and fervent fanbase, the album debuted at No. 2 on the Billboard 200. Today, Creed's music continues to find new generations of fans, while the band members each remain active with their individual projects.