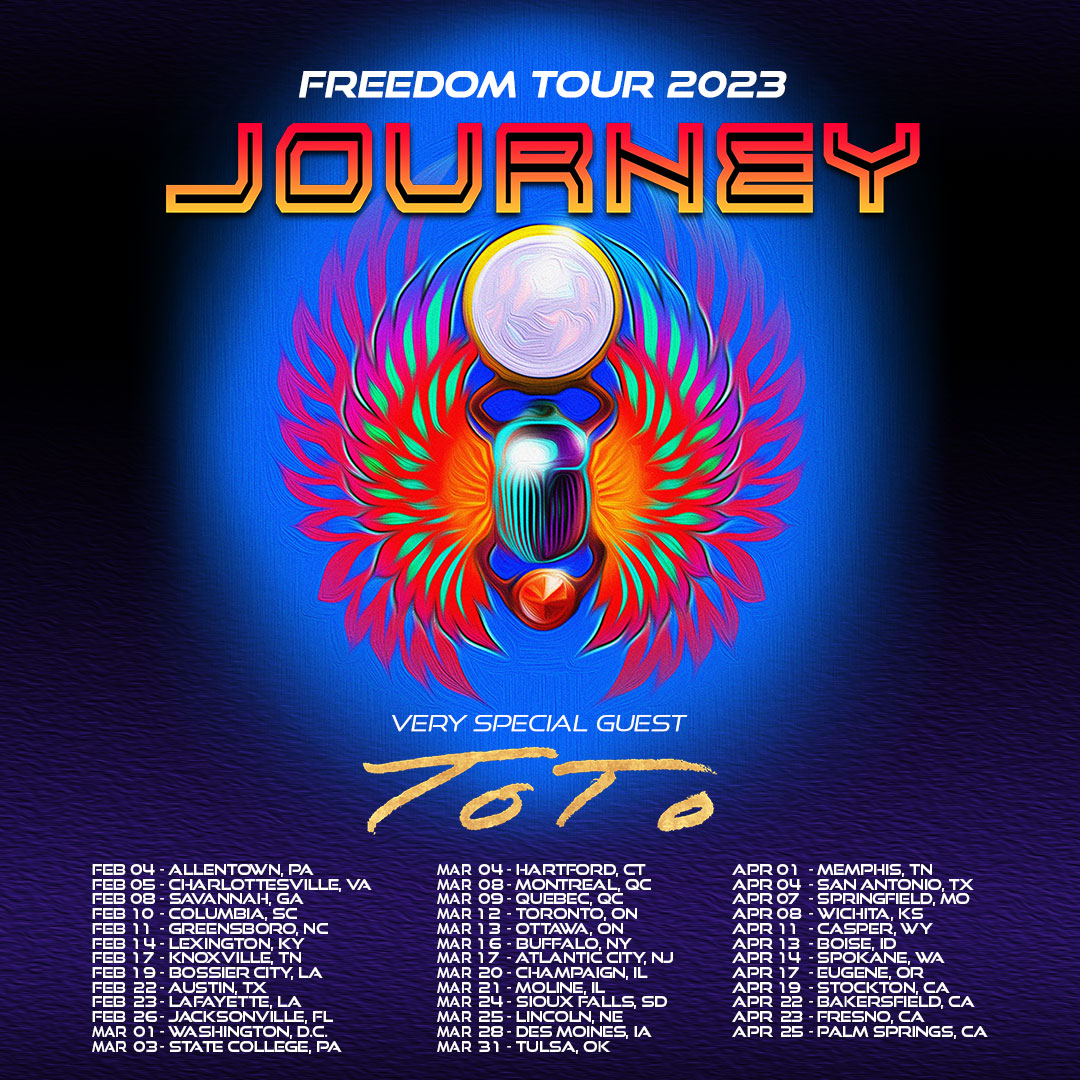 Band is celebrating 50th anniversary in 2023

One of the most legendary rock bands of all time, Journey, announces the continuation of their successful tour with the “50th Anniversary Celebration Freedom Tour 2023,” featuring, very special guest Toto.

Journey, Diamond-selling Rock and Roll Hall of Famers, will take the stage in 38 cities across North America with a catalog of global chart-topping hits, including "Don't Stop Believin,” "Any Way You Want It," "Faithfully" and "Lights.”

The 2023 run includes rescheduled dates in Washington, D.C., plus Hartford, Toronto and Quebec, which were postponed earlier this year due to the coronavirus.

Journey and Toto will perform at the KeyBank Center in Buffalo on March 16.

Citi is the official card of Journey’s “50th Anniversary Freedom Tour 2023.” Cardmembers will have access to presale tickets for the U.S. dates beginning at 10 a.m. local time Tuesday, Oct. 18. For complete presale details, visit www.citientertainment.com A limited number of exclusive VIP packages are also available. These offers can include a selection of reserved seated tickets and custom merchandise.

Schon said, “We are all thankful and overwhelmed by the success of our Journey ‘Freedom Tour 2022’ this year, and have added a new run of dates for 2023. We are looking forward to hitting the road again with our very good friends Toto! Come join us for a special evening full of fun and rockin’ good memories. See you soon, friends.”

Cain added, “Excited to perform for our fans as we tour next year with Toto. The combined hits of both bands represent a couple of decades of excellence that have become a soundtrack for people’s lives. The music of Journey, along with the music of Toto, is an example of “certain music” during “uncertain times.”

Very special guest Toto, who have collectively streamed more than 3.3 billion plays on Spotify alone based on hits including “Rosanna,” “Africa” and “Hold the Line,” will join Journey on all dates.

Toto’s Steve Lukather shared, “'On behalf of myself and the band, we are very honored and excited to do this tour with our old and dear friends Journey. Gonna be a great night of music and, as all the guys are lifelong friends ... a blast off stage as well.” 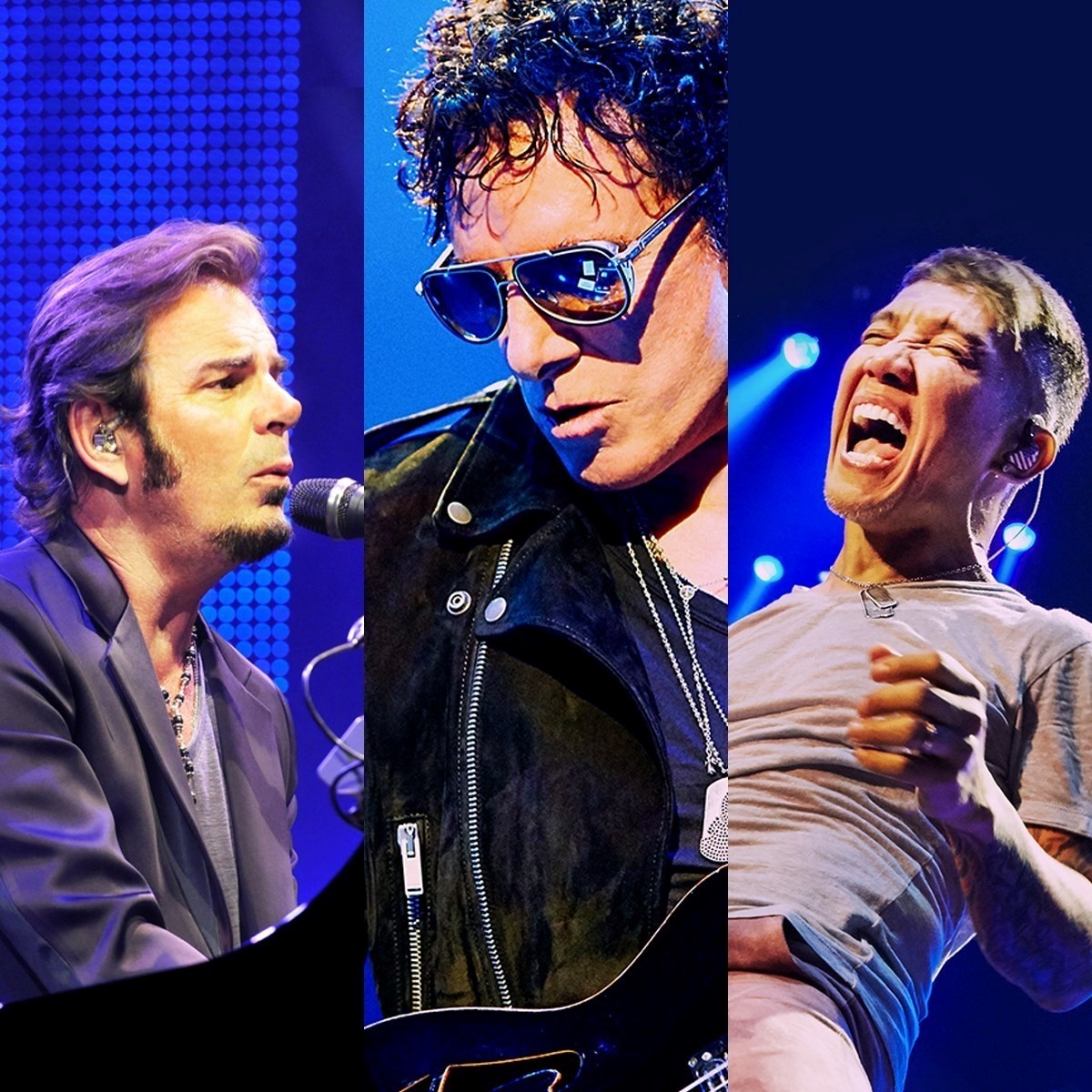 Since the group's formation in 1973, Journey has earned 19 top 40 singles, 25 Gold or Platinum albums, and has sold over 100 million albums globally. Their "Greatest Hits" album is certified 15 times-Platinum, making Journey one of the few bands to ever have been Diamond-certified. The song "Don't Stop Believin' " has been streamed over 1 billion times alone.

Journey was inducted into the Rock and Roll Hall Of Fame in 2017. 2018's co-headlining tour with Def Leppard was the band's most successful one to date. It landed in the Top 10 year-end touring chart with more than 1 million tickets sold, and earned Journey the prestigious Billboard "Legends Of Live" touring award.

March 2019 saw the release of "Escape & Frontiers Live In Japan,” a live DVD/CD set from a concert at the Budokan in Tokyo featuring the band's first-ever performances of the albums "Escape" and "Frontiers" in their entirety. Journey has also received a star on the Hollywood Walk Of Fame and was inducted into the Hollywood Bowl Hall Of Fame.

Additionally, the band is the subject of the award-winning documentary "Don't Stop Believin': Everyman's Journey" about the band's resurgence upon adding Pineda as lead singer after Schon discovered the Philippines native on YouTube.

The members of Toto are celebrating an accomplishment few bands have achieved in the modern era. Cumulative streams of the ensemble’s repertoire now exceed 3 billion plays. Amongst the most listened to recordings, “Africa” accounts for over 1 billion streams at Spotify alone. This year, the song was recertified by the RIAA as eight-times-Platinum.

Over the past decade, the band has had a major renaissance in popularity like few bands at this point in its career. The audience is truly multigenerational, becoming younger with each passing year. Joining Lukather and Joseph Williams are bassist John Pierce (Huey Lewis and The News), drummer Robert “Sput” Searight (Ghost-Note, founding member Snarky Puppy, Snoop Dogg), keyboardist Dominique “Xavier” Taplin (Prince, Ghost-Note), multi-instrumentalist/vocalist Warren Ham (Ringo Starr) and keyboardist/background vocalist Steve Maggiora. This lineup marks the 15th incarnation of Toto in consideration of band members or sidemen who joined or exited.

Individually and collectively, few have had a larger imprint on pop culture than the members of Toto. The family tree can be heard on an astonishing 5,000 albums that together amass a sales history of a half a billion albums. Amongst these recordings, NARAS applauded the performances with hundreds of Grammy nominations.

With now 45-plus years together and literally thousands of credits, including the biggest selling album of all time (“Michael Jackson’s Thriller”), and accolades to their names, Toto remains one of the top-selling touring and recording acts in the world. They are the benchmark by which many artists base their sound and production, and they continue to transcend the standards set by the entire music community, being simply synonymous with musical credibility. They are pop culture and are one of the few ’70s bands that have endured the changing trends and styles, continuing to remain relevant.

More information about AEG Presents can be found at www.aegpresents.com.