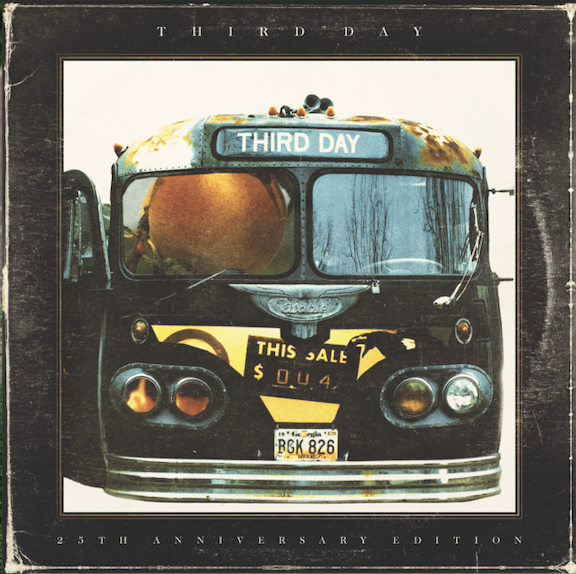 Grammy Award-winning, multi-Platinum-selling band Third Day celebrates the 25th anniversary of its self-titled debut album, which has become fondly known as the "bus album." In honor of this anniversary, Provident Label Group/Sony Legacy will rerelease the band's debut album, including live tracks that span the early Third Day years captured at various locations.

“Third Day 25th Anniversary” will release on Oct. 21 on all platforms.

"Time flies when you’re having fun," Third Day frontman Mac Powell said. "Can’t believe the ‘bus album’ is over 25 years old now. I still get requests live for so many songs from that album and always love revisiting them!"

The band's self-titled debut is an RIAA Gold-certified album and featured the band's first No. 1 radio singles, including "Forever," "Blackbird" and "Nothing at All." This album became the catalyst for the band's incredible career that would label them as one of the best faith-based in history. Third Day wrapped up their run together during a sold-out 2018 “Farewell Tour,” which is all the more reason to make this anniversary release a nostalgic and anticipated project for the band's fans.

Third Day's Mark Lee added, "Has it really been 25 years already? It feels like just yesterday we hit the road in our van to play these songs, hoping to make some fans along the way. All these years later, and this album has become a treasured friend for band and fans alike. We are so excited to mark this occasion by releasing a special edition of the ‘bus record’ on vinyl, along with some exclusive live versions of these classic songs."

Third Day has played for audiences reaching into the millions all around the world and has been featured on top media outlets including “The Tonight Show with Jay Leno” (NBC), “The Late Late Show with Craig Ferguson” (CBS), CBS’ “60 Minutes,” ABC’s “Nightline,” USA Today, the New York Times, and even graced the cover of Billboard Magazine, which called Third Day “one of the best rock bands, period.”