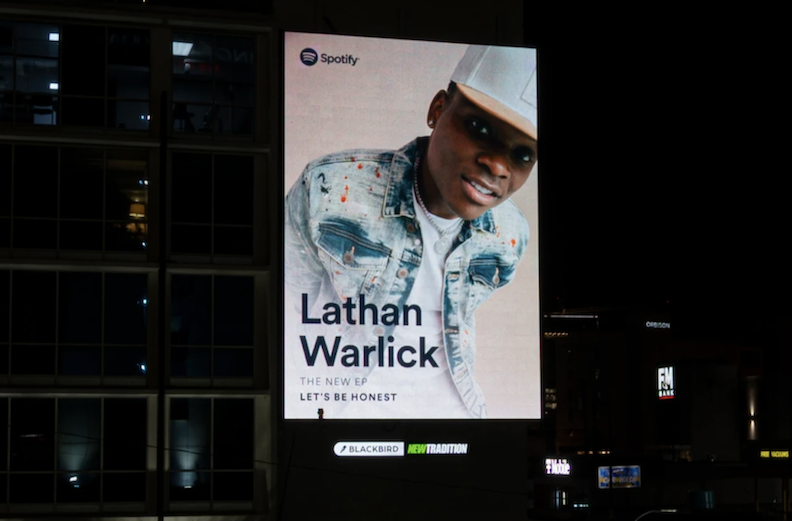 √ Warlick recently shared his music in front of 45,000+ at Alabama music festival

Leading up to today's release, Warlick dropped the project's first single, "Look Up To The Sky (feat. Blessing Offor)" last month. Additional songs are "Solo," "Long Way (feat. KB)" and "Can't Lose." Warlick created the EP with The 720, the Grammy Award-nominated songwriting and production duo Jarrod Ingram and Blake Hubbard – the team behind country artist Mickey Guyton's 2021 Grammy-nominated hit "Remember Her Name," as well as artists such as NF and Jimmie Allen.

"This EP is me being 100% transparent with the audience about things I’ve faced since coming into the music industry," Warlick shared. "Each of the four songs on ‘Let’s Be Honest’ also highlights my faith and is overall just uplifting."

Promoting his new project, Warlick is featured on the popular Spotify billboard located in Nashville. Also leading up to today's release, he was able to share his music in front of more than 45,000 people when he took the stage last weekend with famed DJ Dee Jay Silver at Rock The South Music Festival in Cullman, Alabama.

Signing to the label RECORDS in 2020, a joint venture with Sony Music, Warlick has been releasing music for years, making a name for himself through collaborations within various genres. His debut EP, 2021's “My Way,” showcased duets with country artists such as Tyler Hubbard (Florida Georgia Line), Lauren Alaina, Russell Dickerson and RaeLynn, and he has shared the stage with Kirk Franklin, Morgan Wallen, Jimmie Allen, Nelly and BRELAND.

A press release said, “It's clear that Warlick's music and message steer clear of genre labels, instead allowing others to form their own opinions about his style.”

He said, “I want to make music that still points you to God, but that you don’t have to only play in church.”

It was one life-changing day in 2011 after coming face-to-face with a 45-caliber pistol when Warlick was awakened to his creative purpose. Identifying himself now as a "positive artist" who reflects on his upbringing in a rough neighborhood, Warlick has gained a transformative perspective as a Christ-follower, husband, and father of two in his music.

Warlick has been featured in major outlets such as Forbes and People, and to date, he has 1.7 million followers on TikTok.

It was a near-death experience that drove him to a deeper Christian faith and a recognition of his lyrical mission – to write and rap original music that shares the message and meaning of these milestones.

Born in Jackson, Tennessee, Warlick lived across the U.S., working as a welder by trade, first at a shipyard and then on a railroad, where he continued to work until December 2020, even while spending weekends in Nashville collaborating with the city’s top singing and songwriting talents. It was not until one life-changing day, when face to face with a 45-caliber pistol, that he was awakened to his creative purpose.

He started performing at talent shows as a dancer, in a hip-hop style locally referred to as “Memphis jookin’” – think Michael Jackson meets Usher. These performances gave way to his first viral moment when Chris Brown reposted his dancing on his Instagram.

“That’s when things started going to another level,” Warlick said.

After a pivotal conversation at a church event, he realized that his music, and not his dancing, were his true calling. He synthesized his own form of performance art – videos of him sitting in his truck, adding his own rap verses to popular songs such as “Holy” by Justin Bieber, “The Box” by Roddy Ricch, “Memories” by Maroon 5, “Hello” by Adele, and “You Say” by Lauren Daigle – all filmed on an iPhone and shared on social media.

With social media as his primary platform, his accounts began to see organic growth. Warlick began to see new opportunities in collaboration, such as opening for Franklin twice in 2018, and his musical poetry being featured on Granger Smith’s “That’s Why I Love Dirt Roads” in 2020.

In August 2020, he signed his first record deal with RECORDS Nashville/Columbia.

As he continues his mission of positivity and defying labels, Lathan’s socials show him in the studio, writing and recording with artists RaeLynn and Hubbard.