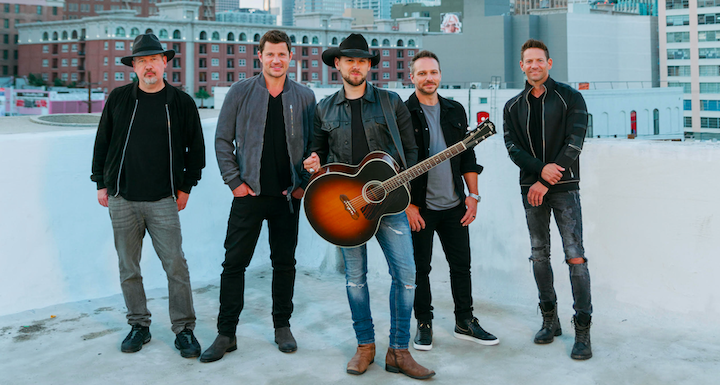 Platinum-selling country artist Brett Kissel and pop and R&B vocal group 98° have released a music video to accompany their brand-new song, "Ain't The Same." The music video can be viewed here and below.

A press release noted, “The video was filmed in various picturesque locations in Los Angeles and shows Kissel's journey to collaborating with 98° and his constant devotion to his children and wife Cecilia, who also served as the inspiration for the song.”

It opens by showing Kissel's messages and a Facetime call with his Cecilia and their kids, and then eventually showing texts from 98° member Nick Lachey. The video then features Kissel and 98° in the studio, on a bus ride through L.A., performing on a stunning rooftop. The video concludes by showing a heartwarming scene of Kissel being surprised by his wife and kids in his dressing room before a sold-out show with 98°.

The singer’s team said, “ ‘Ain’t The Same’ tells the story of a narrator professing his feelings to the love of his life, explaining that life ‘ain’t the same’ without her. The track also features a clever chorus that parallels the narrator's relationship and famous pairings that just aren’t quite right when not together. With vivid lyrics such as ‘the beach ain’t the same without the sun / Coke ain’t the same without the rum / Vegas needs them neon lights / tequila needs that lime,’ the song puts a fresh, lighthearted spin on the concept of finding one’s perfect match.

“ ‘Ain't The Same’ also offers a unique blend of pop and modern country. The single highlights Kissel's warm, rich vocals and ability to express emotions with his music. Kissel's voice, paired with the infectious harmonies of 98°, works together to convey the joy of spending life with that particular person.”

“Ain’t The Same” is out now and can be streamed here.

98° have sold over 10 million records worldwide and achieved eight Top 40 singles in the U.S. From the late ’90s to the early ’00s, the group reached Top 5 on the Billboard Hot 100 with the songs "Give Me Just One Night (Una Noche)," "Because of You," "The Hardest Thing" and collaborated with the great Stevie Wonder, as well as on the hit "Thank God I Found You" (with Mariah Carey and Joe); the latter as featured artists, topping the chart also making it their first No. 1 song. "Ain't The Same" marks 98°’s first foray into country music and comes on the heels of their 25th career anniversary year.

The press release continued, “Kissel has previously received recognition for other powerhouse collaborations, releasing a DND remix of his Platinum-certified single ‘She Drives Me Crazy’ with multi-Platinum-selling superstar Nelly. His charismatic personality, energetic stage presence, and music style have propelled him to the top of the Canadian country music charts, with two Gold-certified albums, three Platinum (including the album version of ‘She Drives Me Crazy’), and eight Gold singles, and 15 top 10 radio hits to his credit. 2019-20 was a storybook year for Brett, winning the JUNO Award (equivalent to the American Grammy) for Country Album of the Year and earning the Canadian Country Music Association's Fans' Choice Award, following a record-breaking 112-date tour that reached every single province and territory. In 2019, he completed two legs of his headlining tour, marked as Canada's most extensive tour ever, selling out venues and electrifying fans from coast-to-coast-to coast. The Canadian Press crowned him ‘The New King of Canadian Country.’ The accolades continued in 2020, when Brett was the big winner of the CCMA Awards, earning four trophies, including Fans' Choice, Male Artist of the Year, and Album of the Year.”

Kissel launched in the U.S. in the fall of 2019 with the release of "Drink About Me." The music video for the song featured “Bachelor Nation” fan favorites Kaitlyn Bristowe and Jason Tartick (view here). The video premiered on “Entertainment Tonight” and garnered attention from PEOPLE Magazine, OK! Magazine, Bustle, E! News, and many more outlets. The music video received significant airplay on CMT Music, and since its release, it has garnered over 40 million streams in the U.S. and Canada combined. As one of the top acts on the Canadian country music scene, Kissel is on the brink of becoming a household name across the U.S. Having toured with Garth Brooks and Brad Paisley, the young entertainer is no stranger to the stage. Kissel is currently in the studio finishing up his upcoming album, due out later in 2022.