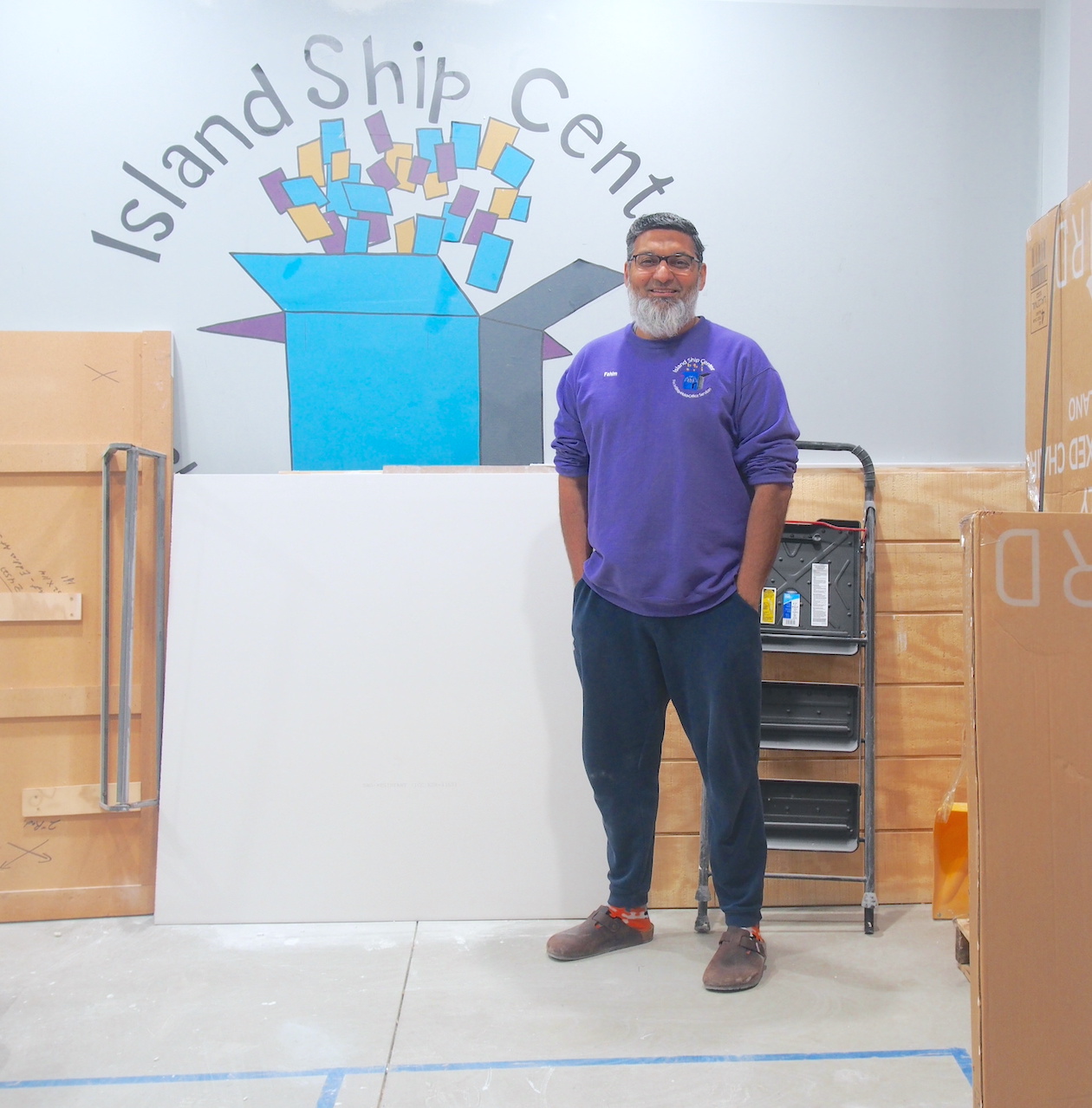 Fahim Mojawalla, co-owner of the Island Ship Center, in the room that will be dedicated as the facility's print room.

The Island Ship Center began with “a dream and a storage unit and fax service” on Baseline Road sixteen years ago, said Fahim Mojawalla, who co-owns the business with his wife, Seema. In 2016, the business moved to its present location on Whitehaven Road, where it began changing and growing.

The Island Ship Center is celebrating its 16-year anniversary, which took place on April 5, with 16-cent color copies being offered to customers until the end of the month, and a big announcement of its new printing capabilities. It is in the process of dedicating a room to serve as the print room. “We started with a small printer in 2016. We invested in a larger printer in 2021. Two jobs from a very large company paid for the printer. It’s a company that’s been growing by leaps and bounds because they were entrusted to make COVID tests for the United States. They needed a lot of blueprints because they were going through extreme construction and they still are. I am very thankful for that,” Mojawalla said.

“Seema came on board at the end of 2013 and, since 2015, has really changed the game. We’ve changed into a complete retail, shipping, and printing facility. So we’re not just a copy center any more. We’re doing a lot of retail printing. Posters, banners, binding. We’re doing NCR forms, two part, three part. We work with contractors and construction workers and plumbers and architects. We do a lot of blueprints. Tons of blueprints. Actually, that’s a forte. We are competing with some large blueprint venders in Western New York. So I’m really happy about that. There are a lot of people who live on the Island, who work off Island for their construction sites. They were getting blueprints off Island. We were able to match their pricing, give them proper discounts, and volume pricing, and get their business,” Mojawalla said. He explained that the architectural drawings “have to be done to scale.”

The Island Ship Center also gets “a lot of business with Canadians. Even during the pandemic, we were really catering to receiving packages for them and shipping them. Now that they’re finally coming back, we’re getting a lot of Canadian packages coming through here. So package receiving and holding is very big for people. We just added live web chat on our website. So people are able to chat live from our site, and they can do it from a mobile phone, text to contact us. And then this print room, this is the beginnings of a dedicated printing facility inside the warehouse, where we can have all of our printing equipment, our inventory, our papers, everything that’s good to go. So we know what’s at hand. Whether it's the rolls of paper or blueprints or poster. We do a lot of posters for school events and things like that. It's basically a community business. I would argue that more people know Fahim and Seema than know the Island Ship Center. It’s slowly changing, but the community is really what I thrive on.”

Being part of the community has included serving as a member of the Grand Island Chamber of Commerce Board of Directors between 2012 and 2017, which included two years as a member of the Executive Board. He said that gave him the opportunity to make many connections with other business owners, as well as with the community. “Connecting to the community is big. We abide by generosity without expectation. It just comes back in different ways and shapes and forms from different directions. It doesn’t come back from where you sent it. That’s the key to understand that pushing generosity out into the world will come back, but it will be from a different place.”

The Island Ship Center strives to “make the mundane extraordinary,” Mojawalla said. The business has expanded beyond shipping to areas such as graphic design and weddings and package receiving and holding.

“Weddings are really big. They’re back now so Seema is specifically catering to very high end and fastidious brides. Meticulous marriages, if you will. The invitations, the RSVPs, the design from soup to nuts. Everything. One of our dear clients and friends calls Seema ‘the unofficial wedding planner’ because she’s basically asking her all the questions the wedding planner was supposed to ask her, as well,” Mojawalla said.

Theresa Dudkiewicz, the full-time graphic designer at the Island Ship Center, has been an “awesome asset,” said Mojawalla. “She’s like an extended family member. We laugh and joke together. We get upset like brother and sister together. It’s just one of those things, where it’s a family feel. So we’re very honored. . Whatever you need, get it done before the end of June because she goes on maternity leave for two months.” To contact Dudkiewicz for graphic design work, email her at [email protected].

Others who make up the staff at the Island Ship Center include Mojawalla’s son Yusuf, who works full time. “We also have Anthony and Jordan part time. They’re in school. It’s Anthony Amato. He just got recruited for soccer at Niagara University, so he’ll be staying local. Jordan plays soccer for D’Youville. At summer and at Christmas time, I have my full team. We have one or two more people coming in the summer to help us out when Theresa goes (on maternity leave). We’re officially six people on our team. During the pandemic, we grew to 14 people. We had a lot of work coming in from Canada.”

Island Ship Center is one of top three spotlight stores on Fedex.com, which I am really proud of. Out of 5,200 Fed Ex authorized Fed Ex ship Centers in the country, three were chosen to be guiding stores. They’re called spotlight stores to help people get in the industry. Whoever wants to start a Fed Ex would get in touch with us and ask us and see if they’re going in the right direction. That was chosen because of our service and experience that we provide to our guests. The other two, interestingly enough, are located in extremely large markets. So, for us to be chosen, we are really honored. The other two are in Fort Worth and Phoenix.”

“Also, as part (FedEx’s) treat to us in 2019, they gifted us a completely company paid trip to the Fed Ex Gold World Championships in Memphis. Fed Ex companion as well as a completely private tour of the Fed Ex World Hub. The tour started at 10 p.m. and went on until 1 a.m., where all of the magic happened. It was a childhood dream of mine to get inside a Fed Ex plane. No pictures. I couldn’t take the pictures I really wanted to. They took us out to dinner. All the meals were paid. It was only seven stores that were invited so it was only 14 people. It’s really nice.”

Mojawalla said that his goals for the future are to “basically grow with empathy, collaboration, focus, consistency, and discipline. Use the resources of the people we have to then take the business in that direction. I’m not going to grow in the direction that I want to, necessarily. We want to grow in the direction where our community wants us to. We are getting a lot of demand for the printing.

“Empathy and collaboration define our business. I think that gratitude defines Fahim and Seema. We’re just overly grateful for everything. We parent that way. Sometimes, being grateful means having the courage to be kind to the unkind. It defines us. What we do when we have the ability to make that decision defines us more than anything else. Our actions define us,” Mojawalla said.