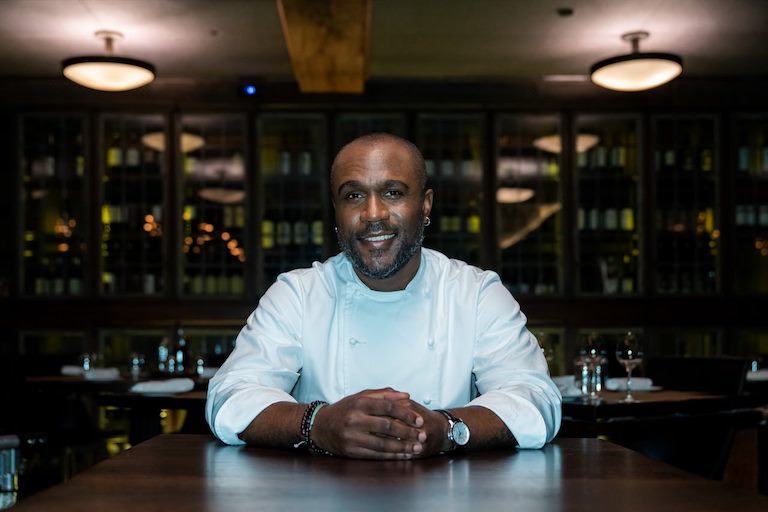 Chef Cliff Crooks is a charismatic and talented culinary director for a global restaurant group who is passionate about sharing all he has learned with struggling professional cooks in “Chef Boot Camp,” which returns for season two on Thursday, April 7 (10 p.m. ET/PT), on Food Network.

In the series, Crooks is tough, yet supportive and funny, as he leads boot camp each week for a new trio of self-nominated chefs from around the country who acknowledge they need to make big changes if they are to succeed in the food industry. Over three days, Crooks leads intense culinary drills that tests how these chefs cook under pressure, manage their time, and communicate. After a fundamentals round to assess their strengths and weaknesses, the stakes are high as Crooks welcomes the cooks to his own kitchen at BLT Prime where they must execute a live fast-paced dinner service and cook alongside the restaurant’s staff. Finally, the pros showcase their culinary creativity for a family meal to be shared by Crooks and their fellow chefs, and decide if they will rededicate themselves to their career in food.

“Cliff has the perfect mix of expertise, heart and humor to set these chefs on the right path,” said Courtney White, president, Food Network and streaming food content, Discovery Inc. “After the success of ‘Chef Boot Camp’s’ first season, and his recent role on long-running hit ‘Worst Cooks in America,’ Crooks has become one of the network’s rising stars – and we can’t wait for our audience to get to know him better.”

Crooks has been cooking in prominent kitchens throughout New York City for more than 20 years. Prior to joining BLT Restaurant Group in 2010 as executive chef of BLT Steak New York, he held positions at Salute!, Blue Water Grill and Gramercy Tavern. After more than two years of leading the kitchen at BLT Steak New York, the hospitality group’s flagship restaurant, Crooks was named culinary director of BLT Restaurant Group and has since played an integral role in inspiring culinary growth among his staff while demonstrating a strong commitment to the brand’s ethos of exceeding expectations through outstanding food and hospitality.

He is host and mentor on the most recent season of Food Network’s “Worst Cooks in America,” and has competed on “Tournament of Champions.” He has also appeared as a contestant on “Top Chef” and a judge on “Hell’s Kitchen” and “Chopped Junior.”

Fans can get to know Crooks and learn some of his best cooking tips at FoodNetwork.com/ChefBootCamp. Follow along with the competition on social media using #ChefBootCamp and share your biggest cooking mistakes.