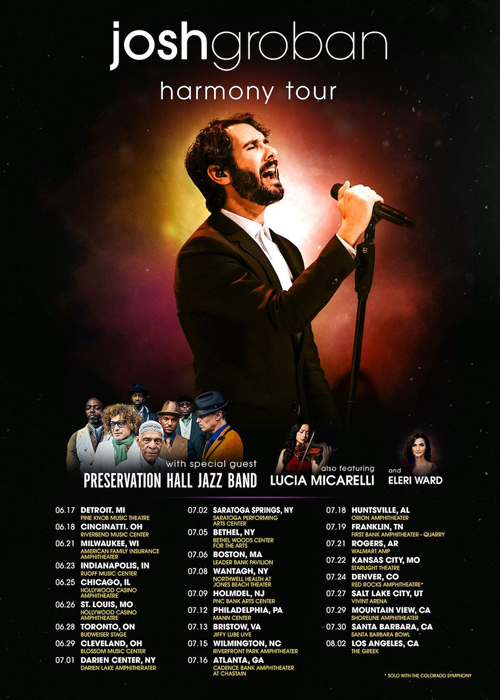 On Monday, multi-Platinum award-winning singer, songwriter and global superstar Josh Groban announced his “Harmony Summer” 2022 tour. This show will be the first time he has played songs for a live audience off his latest album, “Harmony,” released in November 2020 via Warner Records.

The tour will be held at mainly outdoor venues and will kick off on Friday, June 17, in Detroit, at the Pine Knob Music Theater. “Harmony Summer” will visit more than 25 cities across the country before wrapping up at the Greek Theater in Los Angeles on Tuesday, Aug. 2.

“After far too long feeling torn away from my favorite part of my musical life – live performance – it is with huge excitement and gratitude to announce that I’ll be back doing what I do best and love most with the ‘Harmony’ tour,” Groban said. “It will be more than a concert for me … it will be a celebration of connection with my friends, fans and colleagues who have been my anchors during the last couple of years and during the course of my career. I hope you’ll join us for these beautiful nights of music.”

Citi is the official card of the Harmony Tour. Cardmembers will have access to presale tickets beginning at 10 a.m. Feb. 1 through the Citi Entertainment program. For complete presale details, visit www.citientertainment.com.

Members of the Josh Groban fan club will have early access to tickets starting Tuesday. Tickets will go on sale to the general public at 10 a.m. local time on Friday. For more information, visit JoshGroban.com.

A press release stated, “To enhance the safety of all attendees and crew, everyone is stepping up their efforts to inform the public about safety precautions. While this is subject to change, (ticketholders) will be required to provide either a negative COVID-19 test or proof of vaccination. To better serve attendees, the Josh Groban touring crew will be fully vaccinated and wearing masks at all times. We are eager to open the doors to everyone once again to showcase this group of musicians.”

To wrap up 2021, Groban presented an encore presentation of his first holiday concert. The performance featured songs from his critically acclaimed, six-times-Platinum-selling holiday album, “Noël,” as well as a few fan favorites.

The Tony, Emmy and four-time Grammy award-nominated singer, songwriter, actor and philanthropist possesses one of the most recognizable voices in music. A press release noted, “He continues to captivate fans everywhere as both a powerhouse vocalist and dynamic renaissance man. He has sold over 35 million albums worldwide, headlined legendary venues on multiple continents, and entertained audiences with acclaimed film and television appearances.”

Extending his repertoire, Groban made his Broadway debut in 2016 with a starring role in “Natasha, Pierre & The Great Comet of 1812.” He garnered a Tony Award nomination for Best Lead Actor In A Musical. He has expanded his presence with appearances on “Glee,” “The Simpsons,” “The Office,” “CSI: NY,” “It’s Always Sunny in Philadelphia” and “The Crazy Ones,” as well as in the feature films “Coffee Town,” “Muppets Most Wanted” and “Crazy, Stupid, Love.” In addition, he starred in the Netflix series “The Good Cop” in 2018.

Groban remains an active arts education philanthropist and advocate, and his Find Your Light Foundation helps enrich the lives of young people through arts, education, and cultural awareness.

A press release noted, “At a moment when musical streams are crossing with unprecedented frequency, it’s crucial to remember that, throughout its history, New Orleans has been the point at which sounds and cultures from around the world converge, mingle, and resurface, transformed by the Crescent City’s inimitable spirit and joie de vivre. Nowhere is that idea more vividly embodied than in the Preservation Hall Jazz Band, which has held the torch of New Orleans music aloft for more than 50 years, all the while carrying it enthusiastically forward as a reminder that the history they were founded to preserve is a vibrantly living history.

“PHJB marches that tradition forward once again on ‘So It Is,’ the septet’s second release featuring all-new original music. The album redefines what New Orleans music means today by tapping into a sonic continuum that stretches back to the city’s Afro-Cuban roots, through its common ancestry with the Afrobeat of Fela Kuti and the Fire Music of Pharoah Sanders and John Coltrane, and forward to cutting-edge artists with whom the PHJB have shared festival stages from Coachella to Newport, including legends like Stevie Wonder, Elvis Costello and the Grateful Dead, and modern giants like My Morning Jacket, Arcade Fire and the Black Keys.”

Fans can connect with Groban: