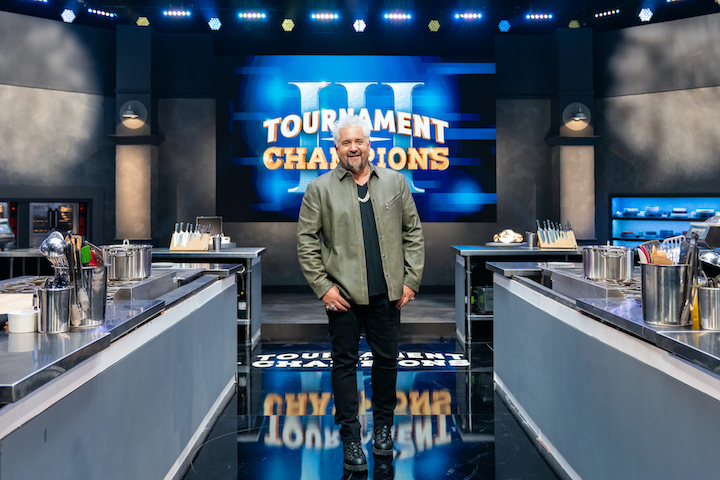 Toughest culinary competition is back with double the chefs, double the battles on 'Tournament of Champions III'

Guy Fieri is back with his iconic culinary competition, “Tournament of Champions III,” premiering on Food Network and discovery+ on Sunday, Feb. 27 (8 p.m. ET/PT).

This year, the toughest bracket-style tournament is supersized with two-hour long episodes and 32 of the country’s most talented chefs going head-to-head to win the largest prize in the tournament’s history. The skills and abilities of the best chefs from the East and West coasts will be pushed to the limit, as Guy spins the dreaded five-wheeled randomizer that determines each cook-off: the protein, produce, equipment, cooking style and time. The pressure is intense, and emotions are high as the elite competitors enter the competition not knowing who their opponents will be and what cooking challenges they will face. Ultimately, their fate is decided blind, by a panel of famous food icon judges.

Hunter Fieri follows all the action backstage, capturing chefs’ reactions as they watch their dishes’ critique and learn who is moving ahead and who is going home. Before the competition begins, at 7 p.m. Feb. 27, fans can look back at the road to “Tournament of Champions III” in an hourlong special featuring the most outrageous randomizer combinations, the biggest victories, fiercest rivalries, and the most shocking upsets.

“Last year, ‘Tournament of Champions II’ finale brought 11 million viewers to the edge-of-their-seats, making it Food Network’s highest-rated series of 2021,” said Courtney White, president, Food Network and streaming food content, Discovery Inc. “This new season goes even bigger. Guy brought the most spectacular culinary skill in the world to this stadium, and the dishes these chefs create are the most spectacular on all of television.”

Guy said, “I’m always telling people to ‘Go big or go home,’ but for ‘Tournament of Champions III,’ that just wasn’t enough. I wanted to go even bigger, so we’ve upped the ante this year with even more talented chefs, more intense competition and the biggest prize in the tournament’s history.”

Simon Majumdar and Justin Warner deliver real-time play-by-play as all the action unfolds in front of a live audience. Deciding who advances in each round is a rotating panel of expert judges, including Scott Conant, Cat Cora, Dominique Crenn, Giada De Laurentiis, Traci Des Jardins, Rocco DiSpirito, Lorena Garcia, Alex Guarnaschelli, Mashaharu Morimoto, Eric Ripert, Nancy Silverton, Ming Tsai and Jonathan Waxman. Unexpected challenges, major upsets and surprises fill this tournament, which concludes on Sunday, April 17. Only one chef will emerge as the champion and take home the $100,000 grand prize.

Fans can join the conversation on social media using #TournamentOfChampions for weekly live Twitter parties, and across Food Network’s Facebook and Instagram, find an insider’s look at the competition, as well as all-new videos with Guy, the competitors, the commentators and the judges every week.

On FoodNetwork.com/TournamentOfChampions, fans can also browse behind-the-scenes photos and binge-watch clips. Beginning on premiere night, fans can head to Twitter to vote on each of the battles in round 1 as all 32 chefs enter the arena. They can share custom hashtags to rally behind their favorite chef-competitors and keep up with the tournament in real-time conversations using the show hashtag.

For a third year, Food Network is partnering with Twitter to launch a digital-only competition where fans can fill out their own personalized brackets for a chance to win cash prizes. Viewers can head to Food Network’s Twitter page from March 20 through March 27 for an individualized bracket experience featuring exclusive content, including videos with Guy and each of the chefs that make it to round 2, as well as share their brackets on social media and track their standings as the competition unfolds.