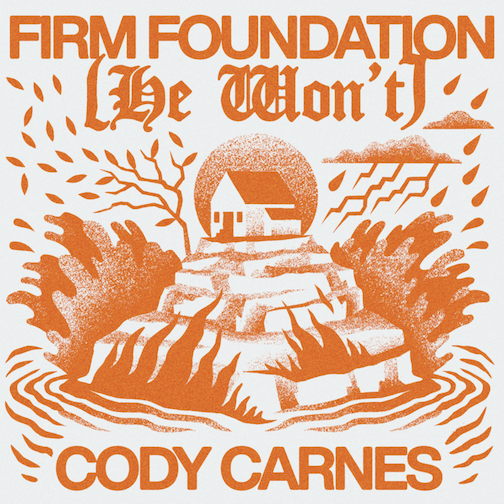 Since his label debut in 2017, Carnes has co-written numerous songs that have become anthems for listeners. Being a co-writer on the global hit, "The Blessing," which has earned two Grammy nominations in consecutive years as well as winning this year's GMA Dove Award for Song of the Year, Carnes has established himself as a songwriter for this worship generation. This release, his team said, is “another proclamation to stand firm in your faith when everything else seems to be faltering. Click below to watch the lyric video that also debuted.

"In such a shaky season, it was burning in my heart to write a song that declared what Jesus teaches us in Matthew 7," Carnes shared of the inspiration for his new song. "It says, ‘Therefore everyone who hears these words of mine and puts them into practice is like a wise man who built his house on the rock. The rain came down, the streams rose, and the winds blew and beat against that house, yet it did not fall, because it had its foundation on the rock.’ The world can be in chaos all outside our windows but, when we build our house on Jesus, we can have confidence knowing that our foundation is secure. We’re not going down! This new song celebrates that truth. I pray it blesses you."

As a songwriter, Carnes has also co-written recent songs such as Hillsong Worship’s “Hope of the Ages" with Reuben Morgan, Sean Curran’s “Shake The Dust Off" with Curran and Brandon Lake, and “Too Good To Not Believe” featuring Brandon Lake.

This year, he and his wife, Kari Jobe, toured nationwide with “The Blessing Tour,” which hit 42 cities with more than half of those being sold-out and with nearly 50,000 tickets sold. He and his wife also performed for the “1DayLA” special event, “The Freedom Experience,” this summer along with Justin Bieber, Tori Kelly, Chance the Rapper and Chandler Moore. In 2022, Carnes will join Phil Wickham on tour, as well as release additional new music.

Carnes is a worship leader who is passionate about creating spaces where innovative artistry and authentic worship can collide. Since releasing his solo label debut project in 2017, Carnes has continued to impact the worship music genre with powerful church anthems “Nothing Else,” “Run To the Father” and “Christ Be Magnified.”

In 2020, he released his studio album, “Run To The Father,” which earned him his first Grammy Award nomination. He also received a nomination for “The Blessing (Live)” for the 63rd and upcoming 64th Awards. The song received “Song of the Year” (2021) and “Worship Song of the Year” (2020) at the GMA Dove Awards. Carnes’ music connects with the listener, as he has more than 166,000 YouTube subscribers and 46 million channel views. He is originally from Texas but now resides in Nashville with his wife and their two boys. The Carnes also both serve at their home church in Nashville.