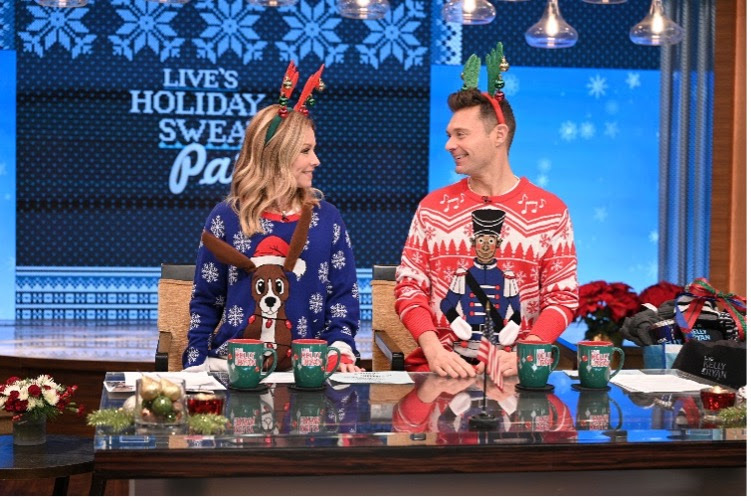 “Live’s Holiday Sweater Party” cozies up on Friday, Dec. 17, and features Method Man and Shaggy, who will perform his song “Amazing Christmas” live in studio. During this classic “Live” episode, there will be festive and fabulous sweaters galore. Kelly and Ryan will be joined by a virtual audience that will include the five style-savvy finalists of “Live’s Holiday Sweater Photo Contest”; the big winner will be announced and $5,000 in prizes will be awarded!

Then, start spreading the news as “Live with Kelly and Ryan: A Very New York Christmas” airs on Wednesday, Dec. 22. Superstar Josh Groban will chat with Kelly and Ryan and perform the iconic tune “Have Yourself A Merry Little Christmas,” and the internationally beloved Radio City Rockettes will tap their way onto the “Live” stage to perform “New York At Christmas.” Plus, Kelly and Ryan will celebrate the majesty of NYC during the most wonderful time of the year with the help of “Live” friend Steve Patterson, who will explore the most delightful parts of the city. As a special treat, the Northwell Health Nurse Choir, a New York-based ensemble that features area nurses and first responders, will perform “We Need A Little Christmas.” And, the talented big winner of the “Live’s Deck The Homes Holiday Contest” will be announced and gifted with a seven-day/six-night trip for two to Maui.

And, of course, no “Live” holiday show would be complete without a special visit from Santa Claus himself!

“Live with Kelly and Ryan” is distributed in national syndication by Disney Media & Entertainment Distribution. The show is produced by WABC-TV in New York and executive produced by Michael Gelman, Ripa and Seacrest. Visit “Live” on the web (KellyandRyan.com), Facebook, Instagram, Twitter and Snapchat (@LiveKellyRyan).