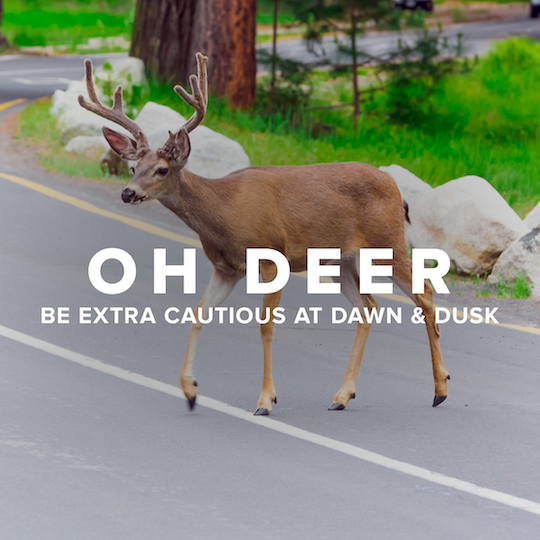 Opening day of regular season deer hunting is Nov. 20 in most areas of Western and Central New York. Hunting will stir the deer population, which is already active due to mating season. AAA is warning motorists to buckle up, be extra cautious on the roads, and scan for deer and other animals.

AAA analyzed New York crash data and found that October, November and December are by far the peak months for animal crashes, notably deer, in the Empire State. There were 33,956 animal-related crashes statewide in 2020 – the second-highest level in the past decade – that’s equivalent to one animal-related crash every 16 minutes.

AAA analyzed New York state data, and here are the top 10 counties for animal crashes in 2020:

Motorists should be especially vigilant after dark as deer crashes often occur outside daylight hours. Crashes are common during early in the morning and in the evening when darkness sets in.

“Drivers should always be on the lookout for hazards on the road, but the danger of deer increases every fall,” said Elizabeth Carey, director of public relations at AAA Western and Central New York. “Car-deer collisions can be both deadly and costly. Drivers should pay close attention, avoid distractions and scan the road for deer when traveling on area roadways.”

√ Scan the road. Especially the shoulders of the road in front of you. Deer may dash out from the shoulder or wooded areas adjacent to the road. They often travel in herds.

√ Follow the speed limit. Keeping your speed down will give you more time to respond to unexpected wildlife movements.

√ Can’t avoid a collision? Apply the brakes firmly and remain in your lane. Swerving sharply to avoid an animal can often cause a more serious crash.