(Image courtesy of the Buffalo Sabres/Pegula Sports and Entertainment) (Image courtesy of the Buffalo Sabres)

On Thursday, the National Hockey League announced the 2021-22 season schedule.

The NHL’s 2021-22 regular season will commence Tuesday, Oct. 12, with a doubleheader, highlighted by the Tampa Bay Lightning raising their third Stanley Cup championship banner before facing the Pittsburgh Penguins at Amalie Arena. 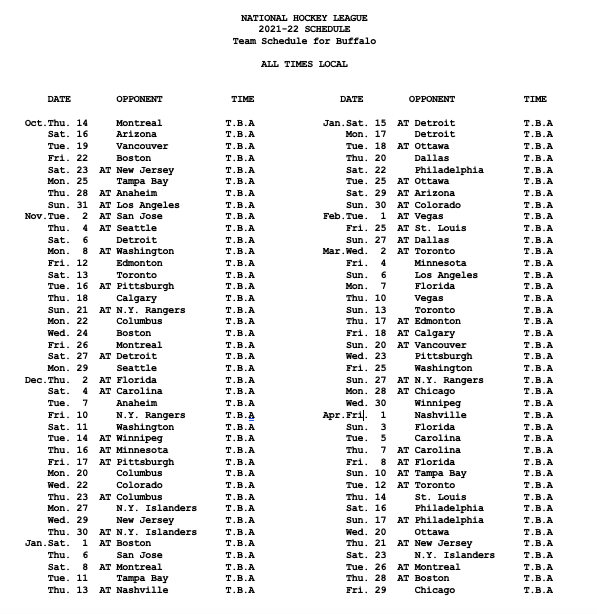 The second game on the opening night of the 2021-22 season will feature the NHL’s 32nd franchise, the Seattle Kraken, who will play their first regular-season game against the Vegas Golden Knights at T-Mobile Arena. The Kraken will play their first home game on Saturday, Oct. 23, when they play host to the Vancouver Canucks at Climate Pledge Arena.

A rematch of the 2021 Stanley Cup Final will take place Tuesday, Dec. 7, when the Montreal Canadiens play host to the Tampa Bay Lightning at Bell Centre.

The 2022 NHL Winter Classic will feature the St. Louis Blues and Minnesota Wild at the home of MLB’s Minnesota Twins, Target Field, in Minneapolis on Jan. 1, 2022. The outdoor game, originally scheduled for New Year’s Day 2021, continues the tradition the League established in 2008 of hosting a regular-season outdoor game at the onset of the new year, with the 2022 edition marking the 14-year anniversary of the first NHL Winter Classic in Buffalo.

On Feb. 26, the 2022 Navy Federal Credit Union NHL Stadium Series will visit the home of the NFL’s Tennessee Titans, Nissan Stadium, in Nashville, where the Nashville Predators will play host to the Tampa Bay Lightning. It will be the second regular-season outdoor game for the Predators and first such game for the Lightning, who will become the 27th NHL team to participate in a regular-season outdoor game.

Olympic Break: No final agreement or decision has been made to this point regarding the possible participation of NHL Players in the 2022 Beijing Winter Olympics. Talks remain ongoing. Subject to reaching agreement with the NHL Players’ Association and the International Ice Hockey Federation on all outstanding issues, including appropriate COVID-19 insurance for NHL Players, the League has agreed, per the collective bargaining agreement, to pause from Feb. 7-22, 2022 to accommodate NHL Player participation in the Olympic Games. The NHL and the NHL Players’ Association will retain full authority to decide not to participate should COVID-19 conditions worsen or otherwise pose a threat to the health and safety of NHL Players, or for any other reason that may warrant such decision.

In the event NHL Players participate in the 2022 Winter Olympics, the NHL regular season will resume Wednesday, Feb. 23. If, for whatever reason, there is no NHL Player participation in the Olympics, a revised regular season schedule will be released which, to the greatest extent possible, will adopt the dates and games reflected in the schedule contemplating Olympic participation.

ESPN, Turner Sports, Sportsnet and TVA Sports are the NHL’s national broadcast partners for the 2021-22 season and will provide comprehensive coverage throughout the season.