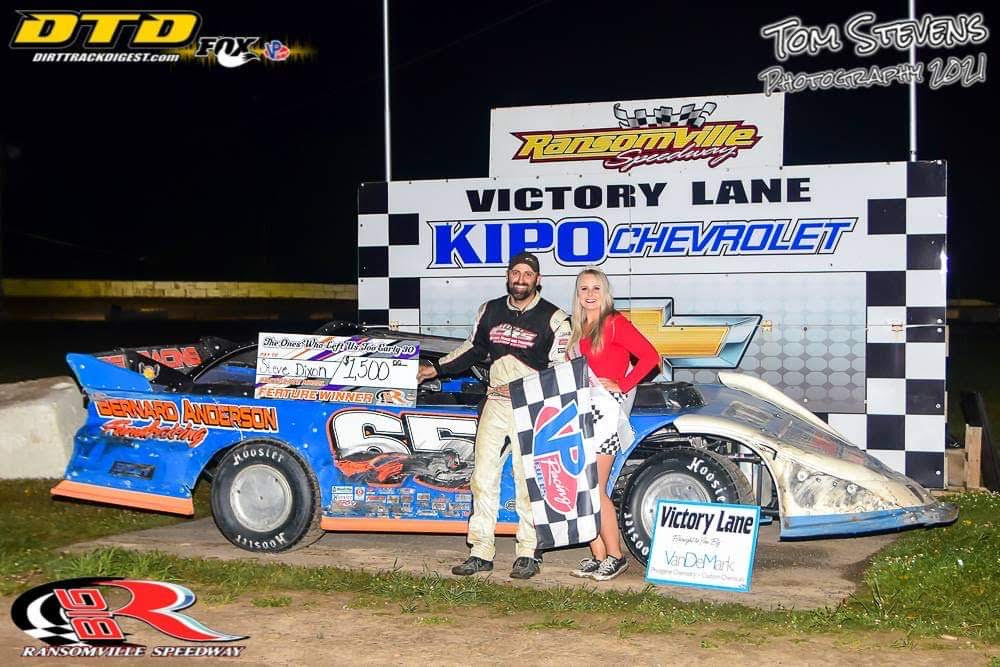 Paul Grigsby and Austin Allen were on the front row for the RUSH Late Model 30-lap special and it was Allen showing the way. A multi-car pileup took place in turn two, roughly seven cars involved. All cars were able to continue, except TJ Downs and Bill Button. With no laps scored, a second attempt of the start of the feature took place, and once again, it was Allen showing the way with David Pangrazio taking over second place. Steve Dixon would move into third after battling with Grigsby. Pangrazio looked underneath Allen to take over the lead on lap three. Dixon would take over second place, with Grigsby, Dustin Waters and Jon Rivers racing inside the top five. The leaders would hit lap traffic on lap 11, allowing Pangrazio to pull away from Dixon and the balance of the field. The battle for fifth place would pick up at the mid-way point as Rivers led Chad Homan, Brian Knowles and Jeremy Wonderling. Knowles would go into the moat on lap 18, allowing Wonderling to move up. On the restart, Steve Dixon would look to the outside and would take over the lead. Pangrazio would hit the turn one wall on lap 19 to bring out the caution. Dixon would lead on the restart with Dustin Waters racing in second, Jon Rivers, Grigsby and Jeremy Wonderling racing in the top five. Wonderling would take over fourth and set his sights on Rivers. Waters would look underneath Dixon for the lead with five laps remaining. Dixson would hold off Waters to score the win.

Robbie Johnston and Jesse Cotriss were on the front row for the Krown Undercoating Modified feature with Cotriss taking the lead. Cotriss would slow exiting turn four to bring out the caution, giving the lead to Mat Williamson. Williamson and Kyle Inman would pull away on the restart with Erick Rudolph taking third place away from Chad Brachmann. Rudolph would take over second from Inman and would begin to set his sights on race leader Williamson. With Williamson having tough times negotiating lap traffic, Rudolph would erase a near four-second deficit. John Smith suffered a flat tire to bring out the caution on lap 18. The restart would see Williamson and Rudolph on the front row, with Williamson in the lead and Brachmann would take over third and Ryan Susice would enter the top five for the first time after starting dead last on the grid after having engine issues aboard his primary No. 38 and having the crew go and get the Randy Slack-owned No 38rs. Williamson would pull away from Rudolph in the late going and would go on to score his second Ransomville win of the season.

Dante Mancuso and Chris Miller shared the front row for the 20-lap Richard Wilkinson Memorial for the Sunflowers of Sanborn Mini Stocks, and it was Mancuso quickly taking the lead. Ashley Harbison moved into third place at the end of lap one, with Brad Whiteside and Chris Leone racing inside the top five. Miller would close the gap between himself and race leader Mancuso, but Mancuso was able to maintain the lead. Leone would clear Harbison to take over third on lap 10, just as Ryan Plante and Cole Susice entered the battle for the top five. Mancuso, Miller and Leone would pull away from the field as Harbison, Whiteside, Susice, Plante, Curtis Rung and Nick Tarnowski all battled for positions on the speedway. Adam Filer slowed on the back straightaway to bring out the races’ first caution on lap 17. At the same time, Cody Griffin suffered a flat right-front tire. Ryan Plante would hit the turn three wall to bring out the caution with two laps remaining. Mancuso would pull away from the field on the restart to claim the victory, his fourth of the season.

Mike Kramarz and Pete Stefanski brought the KiPo Chevrolet Street Stocks to the green flag for their 20-lap feature event with Stefanski quickly taking the lead. After starting sixth on the grid, Jaren Israel was up to fourth at the end of lap one. Israel would look underneath Anthony Guthrie for third place and the duo would battle for several laps, as Stefanski and Kramarz would pull away from the field. Israel would take over third from Guthrie on lap 10, just as Kramarz would reel in Stefanski. Israel would continue to reel in the leaders as Kramarz looked underneath Stefanski on lap 14. The lead trio would battle, with Israel taking over second place exiting turn two coming to five laps remaining. Stefanski, Israel and Kramarz would go four-wide with rookie Tommy Bowen and Israel would take over the lead with two laps remaining. Israel would go on to score his fifth win of the season, with Kramarz finishing in second, and Anthony Guthrie completing the top three. Stefanski suffered a flat left-rear tire and would cross the line in seventh place.

Ken Washburn and Colby Adamczak were on the front row for the Kevin’s Carpet Cleaning Novice Sportsman feature event with Washburn in the lead and Jacob Bansmer racing in second. Bansmer would work underneath Washburn to take over the lead on lap four. John Livingston Jr. flipped in turn one to bring out the red flag on lap five. Livingston climbed out of his car under his own power. On the restart, Bansmer would take off in the lead as Sam Junkin moved into second place. Scott Wolfe spun in turn one to bring out the caution on lap 12, as Bansmer was pulling away from the field. Bansmer would hold off Junkin to score the win, his second of the season.

On Friday, July 16, will be “Labor Night at the Races” present by the Niagara-Orleans Labor Council (NOLC) and BlueCross BlueShield. A full Ransomville racing program will take place including kids rides. The event will be streamed live on www.dirttrackdigest.tv. Fans, drivers, and crews can listen to all the racing action on 96.5-FM using their portable FM radios while on the property. Pit gates open at 5 p.m., with grandstands at 6 p.m. Racing will get underway at 7:15 p.m.