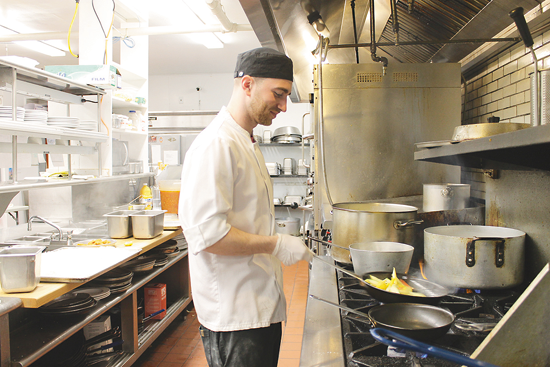 Head chef Peyton Fadel sautés some vegetables in the kitchen of the Buffalo Launch Club.

Up through the ranks: Fadel's path leads from dishwasher to head chef at Buffalo Launch Club

The Buffalo Launch Club has a new head chef with culinary experience far beyond that of most restaurant employees his age.

Peyton Fadel, 24, head chef since April, has worked for about 10 years at the BLC. He is an Island resident, a 2014 graduate of Grand Island High School and a 2017 graduate of the Niagara Falls Culinary Institute. There, he had hands-on learning experience in Savor, the school’s upscale dining restaurant. In fact, two of Fadel’s fellow graduates work with him at the BLC.

Fadel’s previous jobs at the Launch Club have included dishwashing, prep cook, busing tables and serving and bartending at parties and banquets. He also was a sous chef for more than two years.

“I think the one thing that people like a lot is that I started here as a dishwasher and just kind of worked up over the years in just the time that I’ve been here,” Fadel said.

He is glad that, once he graduated, his restaurant experience has all been with the BLC.

“I like it because I pretty much know the lay of the land with everything here,” he said. “A lot of the small things that people kind of forget about over the years, I’ve learned a lot of these things.”

Fadel said some people have told him it’s best to work at a lot of different places to gain experience. He said that’s true to a point, but his path worked out better for him.

“I’ve worked with six different chefs in the 10 years I’ve been here,” he said, as well as working with several different general managers.”

Fadel said that, over the years, he has learned what works and what doesn’t work in the kitchen. “People usually come from other places and they have to adjust to what’s going on. But I’ve already made a lot of the adjustments, and I was really confident going into the position.” 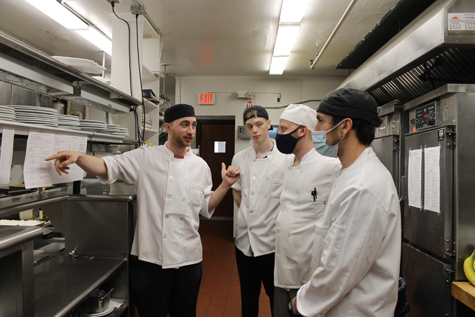 Head chef Peyton Fadel goes over plans for the evening’s dining menu and preparation at the Buffalo Launch Club with his staff, from left, Charlie Hegarty, Peter Bucki and Josh Volk.

General Manager Lisa Harris said it’s a little surprising how fast Fadel has climbed the ranks to be the leader in the kitchen.

“We definitely encourage it. Age isn’t really a boundary,” she said.

Fadel reflects the values of his workplace. “We like to be very creative, keep up with the times and stuff that people like. Consistency is something we really strive to be perfect on every time. And just the plating – I want everything to look super-nice – the first thing everyone sees.”

“When I first started here, I was only 15, and I always liked cooking with my mom and grandma. Ultimately, I thought I was going to take over my dad’s landscaping business from him,” he said. “But when I was a senior in high school, he had a heart attack and had to sell everything.”

Fadel’s brother took over the landscaping responsibilities, starting his own business when he was about 23.

Fadel’s own first dream had been to be a professional baseball player, but repetitive pitching as a young player necessitated surgery to repair injury.

When he started working at the BLC in food prep, it dawned on him, “I enjoy doing this – I can do this forever,” he said. “I always wanted to be the best I can be at anything. … I just always competed with myself to be better and better, whether it was dishwashing, or doing food prep, whatever it was. I always thought that, eventually, I could work up to being the (head chef), but it definitely happened a little quicker than I thought.”

His family encouraged him in his professional cooking career – especially his grandparents. “When I started going to culinary school, I would cook everything and bring it to them and they loved it. I enjoy seeing people happy doing this stuff. … I’m just going to give it my all – and here we are.”

Harris sees inspiration to others in Fadel’s success story.

“I guess it’s a message to the younger generation, too, where anyone just starting off in getting work experience, being in hospitality is not just a dead-end job. If you’re willing to learn, there are different positions you can learn and grow from,” Harris said.

Harris, a Wheatfield resident, was promoted from acting general manager to manager in August 2020. She received her undergraduate degree in 2007 from Niagara University for hotel and restaurant management. Ten years later, she got her MBA from Bentley University in Massachusetts.

“I personally started as a dishwasher, as well, and I worked at the back of the house first,” Harris said. “So I did cooking and eventually serving and I went to school for hospitality, as well. Then after I got my MBA, I went into accounting and did a little bit of everything. It helps you to find what you’re most interested in.”

Fadel noted coming up through the ranks helps you to be a good manager. “You can also see the struggles of every job – like dishwashing. You know what they don’t like to do – busing, serving – you kind of see everything so you can help out with other people, help them understand certain things better … because you’ve been in that position before, so it gives you a better understanding, for sure.”

Fadel has his own approach to creating a delicious and wholesome dining experience.

“I like to focus a lot on freshness,” he said. Some of his popular menu items include fresh seafood such as red snapper, shrimp, scallops and pan-seared sea bass; roast duck breast with a blueberry port sauce; and a Florida-inspired dish he likes to make – and customers like to eat – pineapple fried rice.

Despite the higher price of meat since the pandemic, the club plans to bring to the menu a 12-inch USDA prime strip steak. The BLC also is doing a lot more homemade desserts, such as a fresh strawberry cake.

Fadel described some of the hits on the menu. “The ones the members really, really enjoy – there’s a crab-stuffed haddock,” and Fadel rattles off tempting ingredients such as white wine, butter, parsley and paprika that are added to the dish that’s baked and topped off with a special sauce. Another signature dish is chicken saltimbocca.

Fadel and his kitchen team draw from a variety of cuisines and cultures to present a creative menu for customers, including the club’s more than 200 members.

“They’re finding their inspiration from other places, which is great, Harris said. “I encourage traveling, encourage going to other restaurants to see what other people are doing – (find out) maybe what we can take away and enhance our offerings, as well,” Harris said.

“He’s had a lot of input in creating the most recent menus,” she added. “We’re getting ready to launch a new menu in the middle of June.”

“We try to do a seasonal focus. So in the winter, the cooler months, we do a lot of comfort foods and then when the weather gets nicer, we like to do lighter fare, more of a tropical kind of theme – things you would find in the summer,” Harris said.

Fadel said the lighter fare includes a lot of different salads, sandwiches and appetizers. For the health-conscious or those with special dietary concerns, Fadel and Harris tout the zucchini boat, which includes sautéed vegetables deglazed with white wine and placed in hollowed-out zucchini halves, which can be made as vegetarian or adding chicken, shrimp or steak. The dish is topped with cheese – vegan if preferred – and placed under the broiler for a minute or two for the finishing touch.

Stemming from the pandemic, the Launch Club currently is open to the public at no additional cost over that charged to club members.

“That could change in the future, but since COVID hit we haven’t been instituting any upcharge,” Harris said.

What the BLC encourages is that people consider membership and its long-term perks. There are full memberships for those who enjoy boating. Benefits include recreation areas such as the pool, tennis and volleyball courts and horseshoes; also, access to the basin to dock their boats or come on a transient basis to stop in for dinner via boat.

There’s also another option offered at a lower annual rate, but with a higher food and beverage minimum.

“We actually have a lot of members without boats. We introduced the social membership a few years ago and, this year, the committee’s actually running a special. So no initiation fee until the end of June,” Harris said. 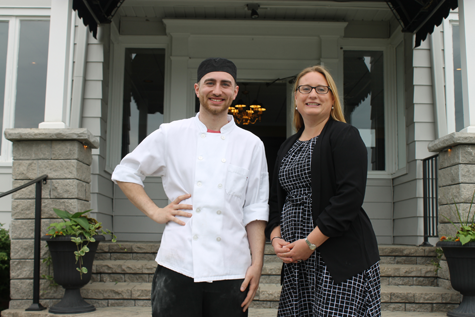 Both types of membership include a priority for reservations. General public reservations are made according to dining room availability. People can make reservations by calling 773-7629.

The dine-in offerings go from sandwiches to full, three-course meals. The dining experience for members or the public can also include in-house banquets in a room that can accommodate 200 people and can also be divided for smaller parties, such as for wedding or baby showers, wedding receptions and birthdays. An outdoor pavilion is also popular for graduation parties.

The BLC has a dress code that’s referred to as “club casual.” Men should wear a collared shirt; jeans are OK, but athletic apparel, ripped jeans and tank tops are not within the code.

The Launch Club is still following the earlier CDC and state guidelines of 6 feet of distance between tables. There’s a dining room, banquet room, a patio and seating by the fireplace, so the club has the luxury of ample space to accommodate diners, despite social distancing recommendations. Masks are required until seated for those who are not fully vaccinated.

The Buffalo Launch Club currently is open Tuesday through Saturday, but starting June 6, it will be open Sundays, as well, for brunch and dinner. Customers can also order a takeout lunch from 11:30 a.m. until 2 p.m. every day the pool is open, starting on weekends, then extended into weekdays, also, once summer is in full swing.

The dine-in hours are:

4-8 p.m. Sunday dinner from 11:30 a.m. until 2 p.m. every day the pool is open, starting on weekends, then extended into weekdays, also, once summer is in full swing.

The dine-in hours are: