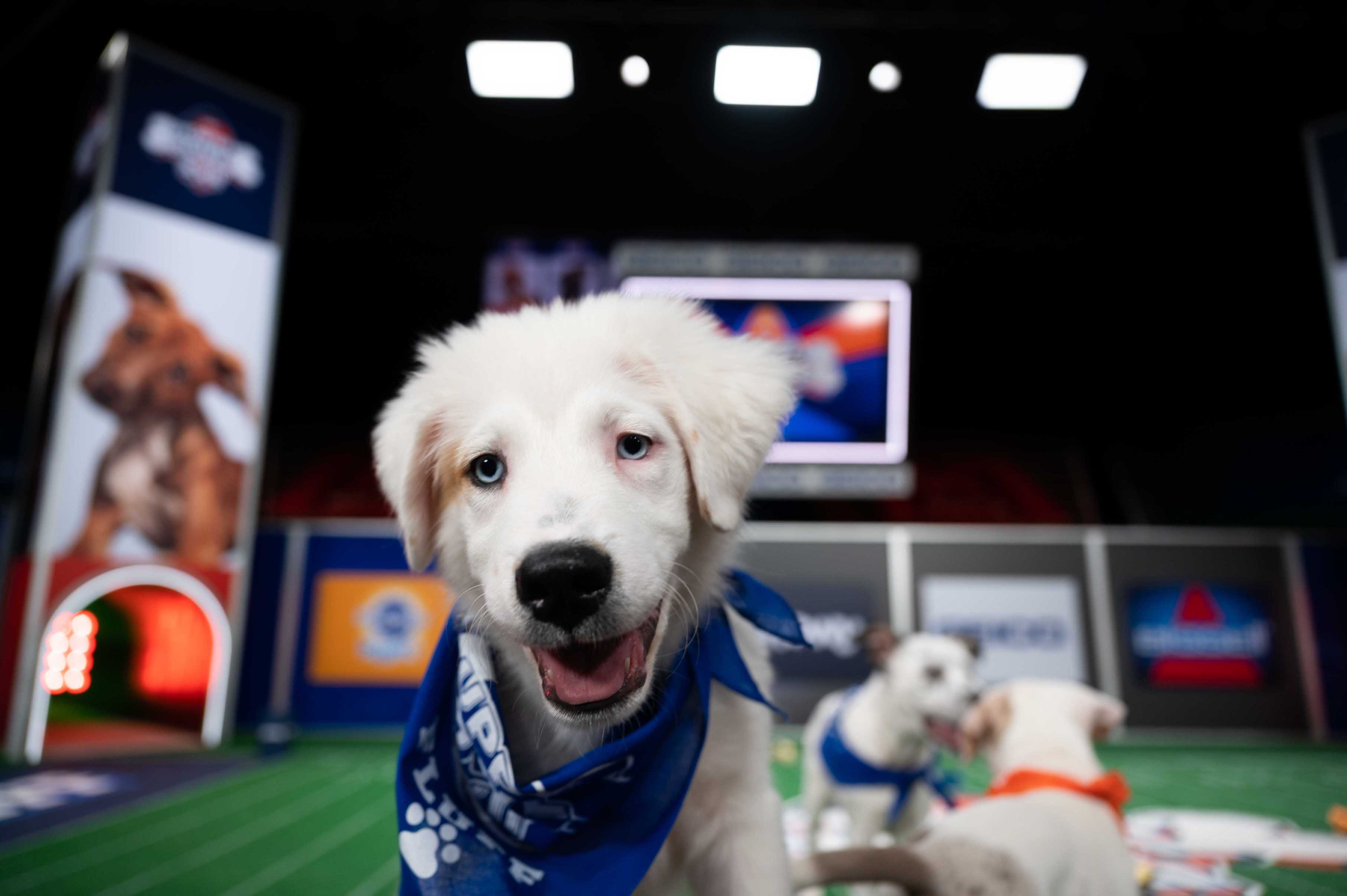 Sunday, Feb. 7, on both discovery+ and Animal Planet

“We need puppies now more than ever!” said everyone.

Have no fear because television’s cutest sports competition and the original call-to-adoption TV event, “Puppy Bowl,” returns Sunday, Feb. 7, for the biggest, most exciting game to date, now as a three-hour event that can be viewed on both discovery+ and Animal Planet at 2 p.m. ET.

Join discovery+ and Animal Planet to experience all the fuzzy puppy faces from Team Ruff and Team Fluff who go paw to paw to win the CHEWY “Lombarky” trophy in “Puppy Bowl’s” all-new venue, a “stadium within a stadium” that’s bigger and better than ever before. Be sure to be on the lookout for Team Ruff who is looking to reclaim their title after last year’s loss – they’re coming back with a vengeance! Gear up because it’s officially the most wonderful time of the year for the biggest game of the year: “Puppy Bowl XVII”!

“Puppy Bowl” celebrates adoptable pups in all their cuteness and showcases the incredible shelters and rescues, as well as their staffers, who dedicate their lives to helping animals find their loving homes. In years past, “Puppy Bowl” is 16 for 16 with the adoption rate at 100% as all puppies and kittens featured in “Puppy Bowl” to date have found their forever homes with loving families. And even though this past year has been different from year’s past, one thing is for certain: There will be a “Puppy Bowl” – and discovery+ and Animal Planet continue this annual tradition to highlight these special puppy players and kittens so that they can finally find the place they are meant to call home.

This year, 22 shelters and rescues from nine northeastern states are enlisted to bring 70 incredible adoptable puppy players out for “Puppy Bowl” to sport their Team Ruff “Tail Mary Tangerine” and Team Fluff “Bark Blue” bandana colors. What genetic traits are these pups bringing to the game? With the Wisdom Panel dog DNA test, viewers will find out what’s beyond those big puppy dog eyes and how each dog’s breed mix might give them an advantage on the field.

See their skills play out in the brand-new GEICO Stadium, where these adoptable players have even more room to rumble and fumble. Fan-favorite elements, including slow motion replays, nose-to-nose action from the famous water bowl cam, and aerial shots of the field from the brand-new Temptations sky box are all back this year, along with epic drone shots of puppy players across the arena that bring audiences as close as possible to all the game-play action. The Home Depot goal post nets serve as the backdrop to every touchdown and field goal as audiences have a front row seat view through lens of the cameras in the Chewy end zone pylons.

Joining this year as “Puppy Bowl XVII” announcers are ESPN’s “Monday Night Football” play- by- play announcer Steve Levy and “SportsCenter” host Sage Steele who will be providing puppy analysis throughout the game. The “Puppy Bowl XVII” pregame show begins at 1 p.m., where long-time “Puppy Bowl” sports correspondents Rodt Weiler, James Hound and Sheena Inu and field reports Brittany Spaniel and Herman Shepard pump up the crowd with pup insights on the furry matchups before the big game. Sponsored by [ yellow tail ] wine, the pregame show will also offer ideas on how to create a “Puppy Bowl” “tail”gate party for the perfect viewing experience.

The game opens with a special performance of the national anthem by singing-group and internet sensation Boys World, before kicking off with the pups of the Pedigree starting lineup, who are giving it their all to compete for the one and only Bissell MVP (Most Valuable Puppy) award by scoring the most touchdowns. Who will take home the title this year to join the greats of puppies past in the Puppy Bowl MVP Hall of Fame? Tune in to find out this and which lucky pup will also take home the coveted Subaru of America Inc. Underdog Award.

Joining the game for the 10th year in a row is America’s favorite “rufferee,” Dan Schachner, who, after a decade, is ready to call the puppy penalties, ruffs and tumbles, and pawsome touchdowns for a game unlike any other. Award-winning animal advocate and television correspondent Jill Rappaport also returns to introduce the Subaru of America Inc. “Pup Close and Personal” segments that shine a light on some of these adorable athletes and other adoptable puppies across the country, in addition to the special senior spotlight stories, which showcase that age is just a number with senior dogs who are ultimately puppies at heart. 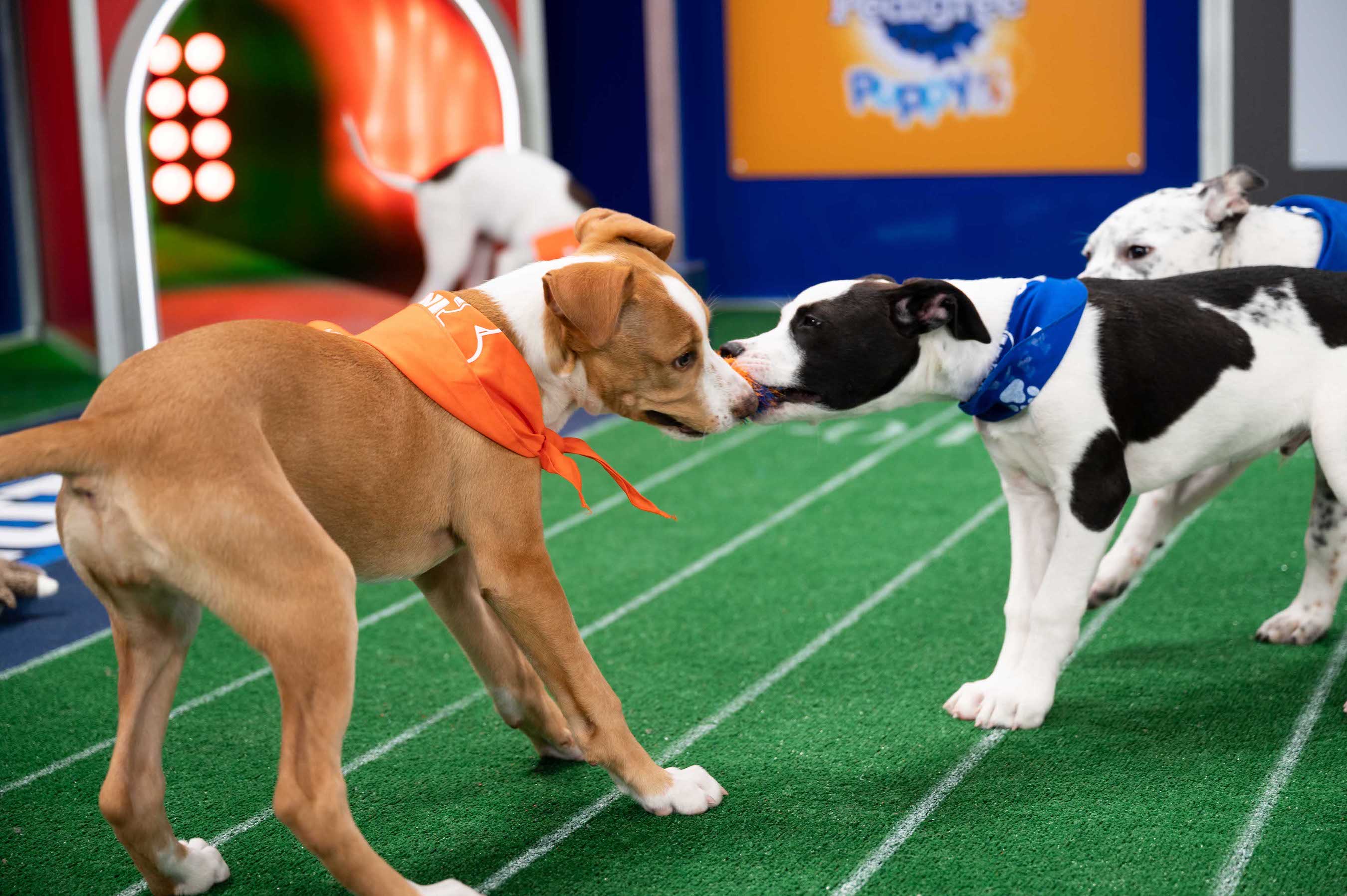 This year’s “Pup Close and Personal” highlights include a special profile of actress and animal advocate Kristen Bell, who has teamed up with Annenberg PetSpace in Los Angeles to spend time with Java, a Labrador mix puppy looking for a fur-ever home to snuggle in; Biscuit, a very special Maltese mix pup from Paw Works in L.A., who gets a special day out with one lucky kid baker from Food Network’s “Kid Baking Championship,” where we’ll also hear from hosts Valerie Bertinelli and Duff Goldman; Fozzie, a Foster Dogs Inc. Norwegian Elkhound who experiences his first ever grooming from Harlem Doggie Day Spa; and Foofur, a Shepherd mix puppy who is cared for by a very special foster under the PAWS Chicago foster program.

Other in-depth profiles include Marshall, a deaf Boston Terrier mix rescue pup who’s training with Green Dogs Unleashed to be a therapy dog, where at a local hospital, he will provide a group of COVID-19 ER nurses with a much-needed mental break in the midst of the pandemic; Jett, a double front amputee Labrador mix from Pets With Disabilities in Maryland, who is prepping for the big game with regular jaunts along the countryside with his fellow special needs cat and dog companions; and Stitch, a Hound mix, who at Wilburton Inn-New England dog friendly resort in Vermont, enjoys a special day out at the Inn on a mission to meet an adopter, before getting scrappy on the field.

Audiences will also see four incredible senior spotlight profiles that include Scoobert, an 8-year-old Chihuahua Boxer mix from mix from Young at Heart Sanctuary in Chicago who, even though he is a senior pooch with medical needs, has a special zest for life; veterinarian Dr. Kwane Stewart, aka @thestreetvet, who treats homeless dogs off the streets of Los Angeles at no cost; Mona, a 10-year-old Toy Poodle mix who undergoes reiki healing sessions at Den Retreat in Los Angeles for a more peaceful state of mind; and Blossom, an American Staffordshire Terrier, who has become the poster pup for the “Pitbulls in flower crowns” series by rescue advocate and photographer Sophie Gamand.

Additionally, for the first time ever on the sidelines, the Team Ruff and Team Fluff players will be cheered on by none other than adoptable puppy cheerleaders who will root and howl for their favorite players. These cheerleading pups will turn up the volume with cuteness overload by shaking their pom poms as the “Puppy Bowl XVII” players make their way down the field.

Midway through the game, get ready to turn up the beat and put on your dancing shoes for the Arm & Hammer Clump & Seal Kitty Half-Time Show. Audiences will experience the neon dance party they’ve been waiting for all year and rave to the purr-fect beats dropped by senior rescue cat DJ Grand Master Scratch. As an after-party treat, viewers will even be able to see a special adoption update on where these dancing felines found their loving new homes with their loving new forever dance partners.

“Puppy Bowl” digital audiences can point their paws to www.PuppyBowl.com to vote for their favorite pup in the “Pupularity Playoffs” bracket-style tournament featuring photos by Instagram sensation @TheDogist. Audiences can also check out an exciting live puppy playtime scrimmage on Animal Planet’s TikTok in the lead up to “Puppy Bowl XVII.” Fans may also be able to see their own animal featured in a photo gallery on PuppyBowl.com when they post a pic of their fur-baby watching “Puppy Bowl XVII” and tag #PuppyBowl. For more fun social content, head to Facebook, Instagram, Twitter and TikTok for original videos, GIFs, Instagram stickers and a “Puppy Bowl” AR filter. Audiences can also follow discovery+ on Instagram, Facebook and Twitter.

Fans can also access even more furry fun and exclusive content on discovery+. Leading up to “Puppy Bowl,” discovery+ and Animal Planet GO users will find exclusive in-app original programming, including the “Puppy Bowl” midform series “Pupclose & Personal,” where NFL stars Chris Godwin, Ronnie Stanley and Ryan Kerrigan reveal their personal pup adoption stories to share why they’re so passionate about canine causes. Plus, watch Dan the Ref take viewers down memory lane, highlighting the very best and firsts of “Puppy Bowl’s” 17-year history. Additionally, fans are also invited to tweet along with game day commentator Meep The Bird and vote in real time for the winner of the Most Valuable Puppy award. Results will be revealed during the epic program.

For more information about the shelters, rescues and organizations that participated in “Puppy Bowl XVII,” Animal Planet audiences can visit www.Puppybowl.com/Adopt.