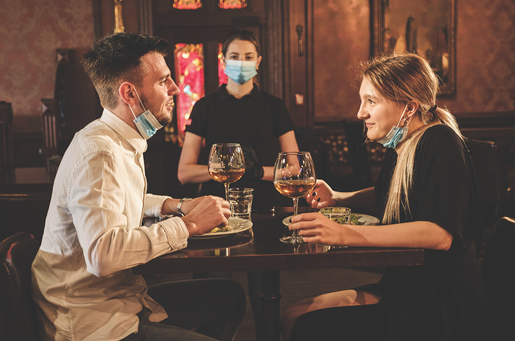 Erie County restaurants permitted to move back into 'yellow zone'

He scheduled a conference for Jan. 19 to “hear on petitioners’ request for a permanent injunction.”

ECDOH issued a statement that read, “After consultation with our legal counsel, and based solely on the preliminary injunction issued by NYS Supreme Court Justice Henry J. Nowak on Jan. 13, 2021, ECDOH public health sanitarians will apply ‘yellow zone’ criteria to all permitted food service facilities that are currently located in ‘orange zones.’ Practically, this means all restaurants in Erie County will be able to offer indoor dining at 50% capacity, as long as ‘yellow zone’ measures including a maximum of four people per table and 6 feet of distance between tables are maintained.

“This action is only effective as long as Judge Nowak's preliminary injunction is in place. If an appellate court of law should rule differently, ECDOH will follow such new judicial order.

“All permitted food facilities should be aware this action only applies to ECDOH’s enforcement of cluster zone regulations. It does not apply to enforcement that may be taken against any entity permitted by the New York State Liquor Authority.

“ECDOH public health sanitarians are continuing educational outreach to permitted facilities along with complaint investigations and inspections as appropriate.”

In Nowak’s decision, he wrote, in part, “Petitioners are owners and operators of bars and restaurants in Western New York. They are currently prohibited from offering indoor dining to their customers pursuant to a determination by respondent New York State Department of Health (DOH) that portions of Erie County are designated in an ‘Orange Zone’ under Governor Cuomo’s Cluster Action Initiative, designed to combat increasing COVID-19 infection throughout the State. Petitioners have commenced this proceeding pursuant to article 78 of the CPLR in which they move for both a preliminary injunction and a permanent injunction permitting them to reopen their indoor dining operations with appropriate social distancing, as set forth in the Interim Guidance for Food Services During the Covid-19 Public Health Emergency (InterimCOVID-19 Guidance), issued by the DOH on November 9, 2020. Petitioners seek to prohibit respondents from enforcing Executive Order No. 202.68, which instituted the Cluster Action Initiative, claiming that respondents’ actions in banning all indoor dining pursuant to that Executive Order are arbitrary and capricious. Petitioners also seek a declaration that Executive Law § 29-a is unconstitutional as a violation of the separation of powers doctrine; that respondents have violated § 29-a; and that respondents have violated petitioners’ rights under the Takings Clause, the Equal Protection clause, and that petitioners have been deprived of substantive due process and procedural due process. …

“The purpose of a preliminary injunction is to maintain the status quo and prevent the dissipation of property until the court can conduct a hearing on the merits of permanent injunction.”

Last October, Gov. Andrew Cuomo announced the start of the micro-cluster action initiative, which he said would take a more detailed approach to curtailing spread of the coronavirus. He established three “zones”: “yellow,” “orange” and “red,” with each level bringing more gathering restrictions.

Per “New York Forward,” a “red zone” is implemented when a region, after the cancellation of elective procedures and a 50% increase in hospital capacity, is 21 days away from reaching 90% hospital capacity on the current seven-day growth rate. An “orange zone” would begin if a geographic area had a 4% positivity rate (seven-day average) over the past 10 days and it is located in a region that has reached 85% hospital capacity. A “yellow zone” would trigger upon a region showing a 3% positivity rate (same time period as “orange”), is in the top 10% in the state for hospital admissions per capita over the past week, and is experiencing week-over-week growth in daily admissions.

On Nov. 9, portions of Erie County – including Grand Island – were placed into the “yellow zone.” Related to eating out, this meant indoor and outdoor dining would have a four-person maximum per table, and bars and restaurants had to close at 10 p.m. for on-premises consumption.

Nine days later, with the infection rate moving past 5% in Erie County, Cuomo moved areas into an “orange zone.” Of particular interest to the restaurant community, this meant eateries could only offer takeout, drive-thru or delivery. Indoor dining was prohibited.

Nowak wrote, “This court finds that in principle, the Cluster Action Initiative is an ingenious strategy, certainly ‘in the interest of the health or welfare of the public’ and ‘reasonably necessary to aid the disaster effort’ (Executive Law § 29-a [2] [a]). In practice, however, it is entirely dependent on proper identification of clusters, through contact tracing or other means.”

Portions of Niagara County moved into a “yellow zone” on Dec. 14.

Cuomo, subsequently, modified the micro-cluster zone levels to focus more on hospital capacity. In the meantime, the zone designations have remained in place and unchanged.

Nowak wrote, “For petitioners, the effect of this change in designation was dramatic. As a result of the prohibition of all indoor dining in the new Orange Zone, thousands of employees have been laid off and petitioners have suffered financial losses to the point where their bars and restaurants will need to close. …

“Petitioners contend that as a result of the current ban on indoor dining in the Orange Zone, their property has been taken in violation of the Fifth Amendment to the United States Constitution as applied to the states through the Fourteenth Amendment. …

“There is no dispute that COVID-19 positivity rates have continued to rise in Western New York. Curiously, the most significant rise documented in the record occurred after the Orange Zone designation was made. Erie County's daily positivity rate reached 9.4 % on November 30, 2020, and the Western New York Region’s 7-day rolling average positivity rate as of January 3, 2021 was 8.4 %, with the daily positive rate for January3, 2021 at 10.2 %. Such figures greatly exceed metrics previously set for Red Zone designation, much less Orange Zone designation. However, the DOH clearly is not relying upon such data for their designations, as much of the Western Region has no designation at all and portions of Erie County remain in the Yellow Zone. …

“Petitioners rely heavily on information provided by Governor Cuomo at a December 11, 2020 press conference, showing that only 1.43 % of COVID-19 cases are traceable to restaurants and bars. The Governor referred to the information as ‘probably the most informative data.’ Respondents have shown that the contact tracing data relied upon by Governor Cuomo only accounted for approximately 20% of the total COVID-19 positive test results from September to November 2020, and an even smaller percentage of all positive test results maintained by the DOH.”

Nowak said there are limitations with contact tracing and that “casts doubt on the statistic relied upon by petitioners.” He noted, “it also undermines and inhibits the DOH’s ability to properly designate specific areas under Micro-Cluster-strategy, which is premised upon the State’s ability to identify areas of infection on a block by block basis.”

As such, Nowak wrote, “Considering the record presented, this court cannot find evidence that the State had a rational basis to designate portions of Erie County as an Orange Zone on November 18, 2020. On this issue, the court find a likelihood of success on the merits. The court also finds irreparable injury to petitioners in the absence of injunctive relief, and a balance of equities in their favor. … The loss of goodwill that corresponds with a viable business is not readily quantifiable and constitutes irreparable harm warranting the grant of preliminary injunctive relief. Petitioners have also demonstrated that the Orange Zone designation has caused loss of revenue, unemployment, potential foreclosure and hardship upon Erie County residents.”

Counsel to the Governor Kumiki Gibson released a statement Thursday that read, "A court decision yesterday temporarily granted a select few restaurants located within an ‘orange zone’ in Erie County the ability to resume indoor dining under the rules governing ‘yellow zones.’ We are reviewing the decision. While that process is ongoing, to ensure uniformity and fairness, all restaurants operating in ‘orange zones’ can now operate under rules governing ‘yellow zones.’

“We disagree with the court's decision and its impact on public health as Federal CDC data clearly demonstrates indoor dining increases COVID-19 spread. From the start of this pandemic, the state has acted based on facts and the advice of public health experts, and we will continue that approach."