Images courtesy of the NHL, provided by the Buffalo Sabres

The NHL’s 2020-21 regular season will commence Wednesday, Jan. 13, 2021, with a five-game slate, highlighted by the Tampa Bay Lightning raising their second Stanley Cup championship banner before facing the Chicago Blackhawks at Amalie Arena.

The other four games on the first night of the 2020-21 season include the Pittsburgh Penguins visiting the Philadelphia Flyers; the Montreal Canadiens at the Toronto Maple Leafs; the Vancouver Canucks at the Edmonton Oilers; and the St. Louis Blues at the Colorado Avalanche.

A complete listing of each team’s 2020-21 regular-season opening game is below. Start times and broadcast details for all games will be announced when available.

As previously announced, in reaching agreement on the format for the 2020-21 season, the NHL and NHLPA determined that the ongoing closure of the U.S.-Canada border required realignment and the league and the players also sought to minimize team travel as much as possible by shifting to exclusively intradivisional play. It is the current plan to play games in the home arenas of participating teams while understanding that most arenas will not, at least in the initial part of the season, be able to host fans. However, depending on prevailing conditions both in local markets and across North America, the NHL will be prepared to play games in one or more “neutral site” venues per division should it become necessary.

The top four teams in each division will qualify for the Stanley Cup Playoffs, with intradivisional play in the first two rounds (No. 1 vs. No. 4; No. 2 vs. No. 3). The four teams that advance to the semifinal round would be seeded by their regular season points total, with the No. 1 seed playing the No. 4 seed in one series and the No. 2 and No. 3 seeds meeting in the other.

Formal training camps will begin Jan. 3. There will be no preseason games. The seven teams that did not participate in the 2019-20 “Return to Play” will be permitted to open their training camps as early as Dec. 31. 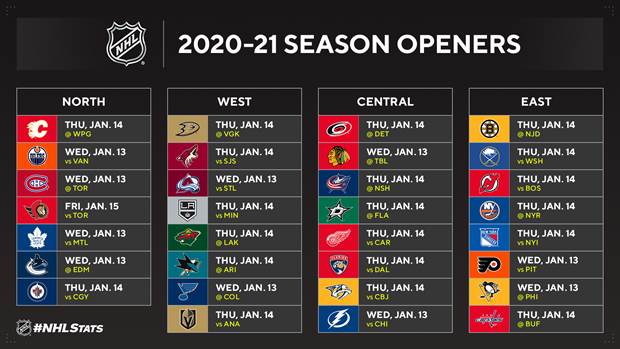 •The North Division marks a return to the NHL’s rivalry roots. The NHL included only Canadian teams in its first seven seasons (1917-18–1923-24) until the Boston Bruins became the first U.S.-based franchise in 1924-25.

•This is the first all-Canadian division in NHL history. When divisions were introduced to the NHL in 1926-27, the Canadian Division included the New York Americans for all 12 seasons (1926-27–1937-38) and the St. Louis Eagles in 1934-35 (a result of the original Ottawa Senators relocating).

•Montreal and Toronto, the NHL’s two remaining founding franchises, will play in the same division for the 41st season all-time and 22nd consecutive campaign dating to 1998-99 when the Maple Leafs joined the Canadiens in the Northeast Division. Ottawa also has been in the same division as Canada’s two “Original Six” clubs since 1998-99; the Senators have shared a division with the Canadiens for each of their 28 seasons (including 2020-21).

•Fans in Winnipeg are set to revisit several old rivalries. The original Jets were division rivals with Toronto for their final three seasons in Winnipeg (1993-94–1995-96) and were longtime Smythe Division foes of Edmonton, Calgary and Vancouver (1982-83–1992-93).

•Vancouver will renew acquaintances with former division rivals Montreal and Toronto. All three teams competed in the East Division from 1970-71 to 1973-74 (each of the Canucks’ first four NHL seasons) before the League realigned in 1974-75.

•Los Angeles and San Jose will clash in the same division for a 29th consecutive season since the Sharks entered the NHL (Smythe: 1991-92–1992-93; Pacific: 1993-94–2019-20). With the addition of Anaheim in 1993-94, the three-team California intrastate rivalry continues for a 27th straight campaign. Arizona remains in the same division as the California trio for a 22nd consecutive season since 1998-99.

•Los Angeles and St. Louis share divisional ties as the Kings and Blues were part of the inaugural West Division for seven seasons beginning in 1967-68 when the NHL expanded to 12 teams. They also were joined in that division by the Minnesota North Stars, who then battled the Blues in the Smythe and Norris Divisions for 16 of their 19 remaining seasons before relocating to Dallas (Smythe: 1974-75–1977-78; Norris: 1981-82–1992-93).

•Colorado rejoins a division with the three California teams, their divisional foes for their first three seasons in Denver (Pacific: 1995-96–1997-98).

•The longest active run as division rivals among teams in the new Central Division belongs to Tampa Bay and Florida, who will play in the same grouping for a 27th consecutive season (Atlantic: 1993-94–1997-98; Southeast: 1998-99–2012-13; Atlantic: 2013-14–2019-20). Chicago and Nashville are next in line with 22 straight campaigns, playing against each other in the Central Division for the Predators’ entire history.

•Dallas shares a history of divisional connections with Detroit, playing against them in the Norris Division as the Minnesota North Stars for 12 seasons (1981-82–1992-93) before relocating to Texas for five more campaigns from 1993-94 to 1997-98 – combining for all five division titles in that span.

•The Lightning contested their inaugural season (1992-93) in the Norris Division, which featured the Blackhawks, Red Wings and North Stars.

•Columbus returns to the Central Division, where it competed for each of its first 12 seasons (2000-01–2012-13). The Blue Jackets had the Blackhawks, Predators and Red Wings as intradivisional opponents over that span.

•The Hurricanes, Lightning and Panthers were in the Southeast Division together for 14 seasons (1998-99–2012-13). Before relocating to Raleigh, the Hartford Whalers played their first two NHL seasons in the Norris Division with Detroit (1979-80–1980-81).

•Tampa Bay and Dallas will become the first teams in 40 years to compete in the same division in the season after meeting in the Stanley Cup Final (1980-81: NYI vs. PHI in Patrick Division).

•Boston and Buffalo will be intradivisional opponents for a 50th consecutive season dating to 1970-71, the longest such active streak in the NHL.

•The Bruins and Rangers will play in the same division for the 20th time in their storied histories, but for the first time in nearly 50 years. The “Original Six” rivals were in the American Division together for each of New York’s first 12 seasons (1926-27–1937-38) and in the original East Division for the first seven campaigns of the league’s expansion era (1967-68–1973-74).

•New York’s intrastate rivalry puts the Sabres, Rangers and Islanders all in the same division for the first time in nearly 50 years. Buffalo played each of its first four NHL seasons in the original East Division, with the Rangers for all four (1970-71–1973-74) and with the Islanders for two (1972-73–1973-74).

•Fans in Boston and Philadelphia are set to revisit a historic rivalry, which featured several playoff battles in the 1970s between the “Big Bad Bruins” and “Broad Street Bullies,” including a meeting in the 1974 Stanley Cup Final, and, more recently, a Winter Classic showdown and historic 2010 playoff series.