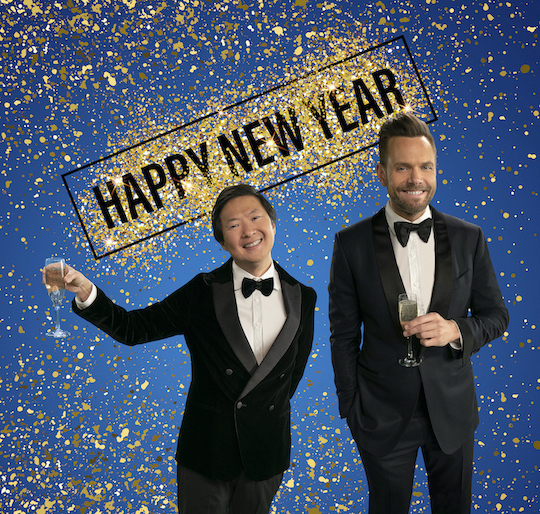 Ken Jeong and Joel McHale are teaming up to “Toast & Roast” all that was 2020 during the most anticipated New Year’s Eve of all time! Jeong, from FOX’s “The Masked Singer,” “I Can See Your Voice” and upcoming “The Masked Dancer,” and comedian and actor Joel McHale, kiss 2020 goodbye as they co-host “FOX’s New Year’s Eve Toast & Roast” 2021 (working title). Jeong and McHale will commemorate the past year from coast-to-coast with a live, three-and-a-half-hour “Toast & Roast” to 2020. Part one airs Thursday, Dec. 31 (8-10 p.m. ET/CT live MT/PT tape-delayed), while part two airs at 11 p.m.

“Ken and Joel together are one of the funniest duos out there,” said Rob Wade, president of alternative entertainment and specials, FOX Entertainment. “These two have been toasting and roasting each other on national television for years, so they were the perfect pair to ring in the New Year. Also, we love Ken so much, we wanted to squeeze in three more hours of him before the New Year!”

Live from Los Angeles, Jeong and McHale will bring their signature comedic hosting style, as the former “Community” stars, hosts of “The Darkest Timeline” podcast and longtime friends reunite to help ring in the New Year with a special dedicated to the highs and lows of 2020, specifically celebrating those that helped to make the world a better place this past year. Join surprise celebrity guests and some of the year’s top music artists to wrap up 2020 and kick off the New Year with a show unlike any other. Additional guest appearances and musical performances to be announced.