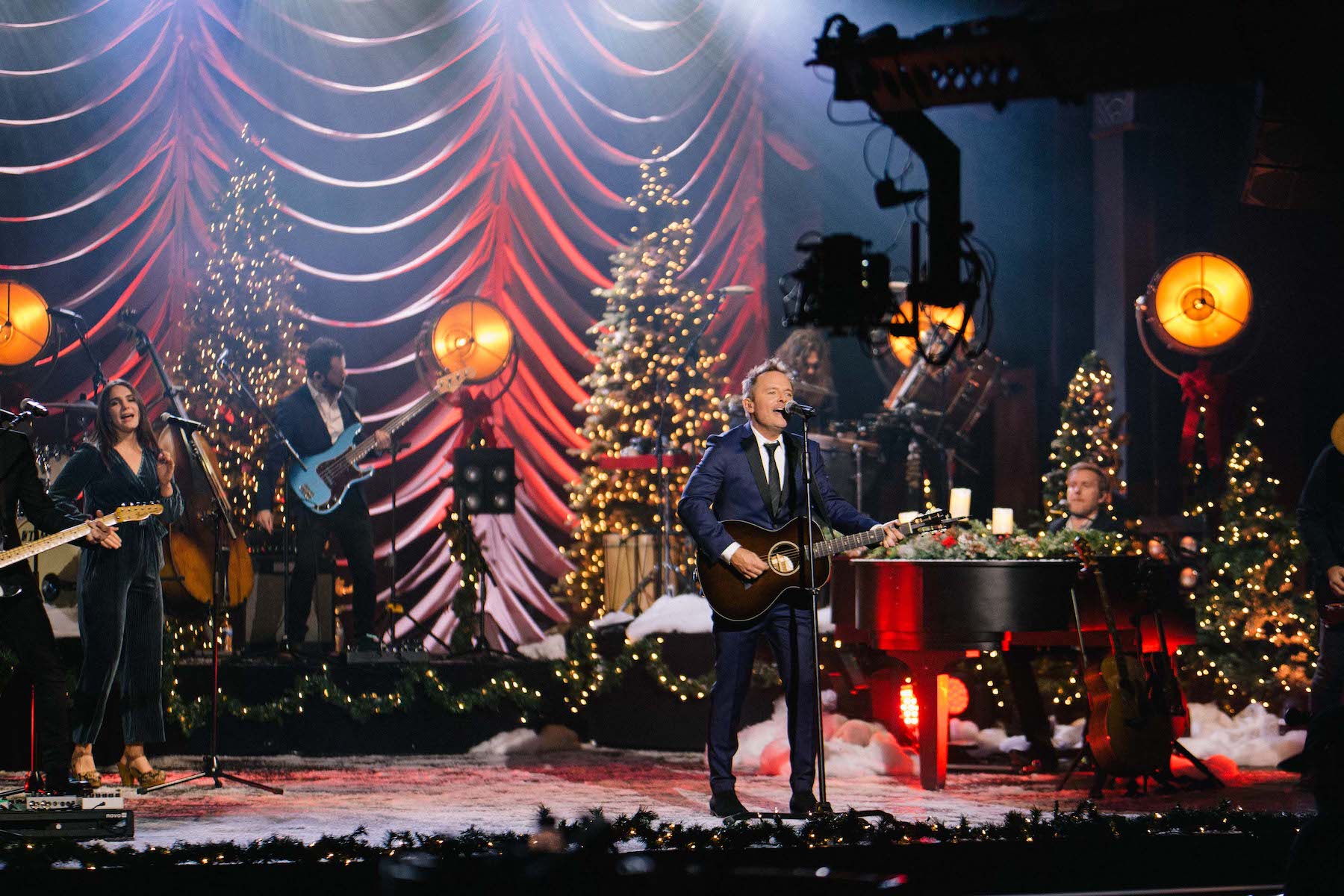 Chris Tomlin on stage for the holiday season. (Photo by Makayla Symmonds, provided by Schmidt Relations)

Chris Tomlin wraps up 2020 with new addition to family, 'Christmas Songs of Worship'

On Monday, Grammy Award-winner Chris Tomlin, his wife Lauren, and daughters Ashlyn and Madison, received their own special delivery of joy with the birth of a healthy baby girl, Elle Grace Tomlin.

Baby Elle was the inspiration for the title track of Tomlin’s latest Christmas release, “Miracle Of Love: Christmas Songs of Worship.” Recently, he premiered the song’s music video exclusively on Facebook. As the only artist in the Christian genre, Tomlin joins the select group of other A-list artists including Bon Jovi, Katy Perry, Chris Stapleton and Carrie Underwood to partner with Facebook in an exclusive release. The song was a highlight in Tomlin’s Christmas special, “K-LOVE Christmas & Chris Tomlin Present Christmas Songs Of Worship,” which delivered Christmas joy into homes everywhere last weekend.

The 90-minute Christmas concert is available on Stabal’s on-demand platform and includes guests We The Kingdom and Pat Barrett, with a special appearance by Ashlyn and Madison Tomlin, who joined their father to perform “Silent Night.” Tickets to watch the special are still available with the purchase of a 30-day pass at www.christomlin.com. This pass includes unique behind the scenes content, including a fireside chat, acoustic performance of “The First Noel,” and a moving performance of “Tin Roof” by artist Blessing Offor (who appears on the “Chris Tomlin & Friends” album). The concert was made possible by K-LOVE, Awakening Events, Stabal and Altrua HealthShare.

The Christmas special and baby Elle tied the bow on what has been a monumental year – and one of surprises – for Tomlin. It began with the transition of his annual “Good Friday Nashville” concert into a global TV and radio event due to COVID-19. Soon after, Tomlin was asked to join Reba, Hillary Scott and Keith Urban on Thomas Rhett’s No. 1, “Be A Light,” which resulted in Tomlin receiving his first CMA award nomination and making his debut performance at the CMA award show.

Continuing in a year of surprises, the artist released “Chris Tomlin & Friends” in July, a 13-song project featuring him with some of today’s biggest country music artists. The album debuted at No. 1 on Billboard. To launch the new music, Tomlin performed “Thank You Lord” with Rhett and executive producers Florida Georgia Line on the “Today” and “The Late Late Show with James Corden.” The album contains his 17th No. 1 single, “Who You Are To Me,” feat. Lady A. The song reigned at the top of the charts for six consecutive weeks, making it Tomlin’s second-longest-running No. 1 after his 14-week success with “Whom Shall I Fear (God of Angel Armies).” In November, Tomlin performed with Lady A and Russell Dickerson on the Grand Ole Opry stage.

“Over the years, I have come to experience that songs are like arrows out of a bow. As an artist, we are the bow and we are shooting these songs out into the world, and it is always amazing to watch how they go so much further than you could ever see – and how they mean so many different things to some many different people,” Tomlin said. “I am beyond words for how God has used new relationships, new music, and opened new doors to help people in 2020 … and I am optimistic for what is in store for 2021.”