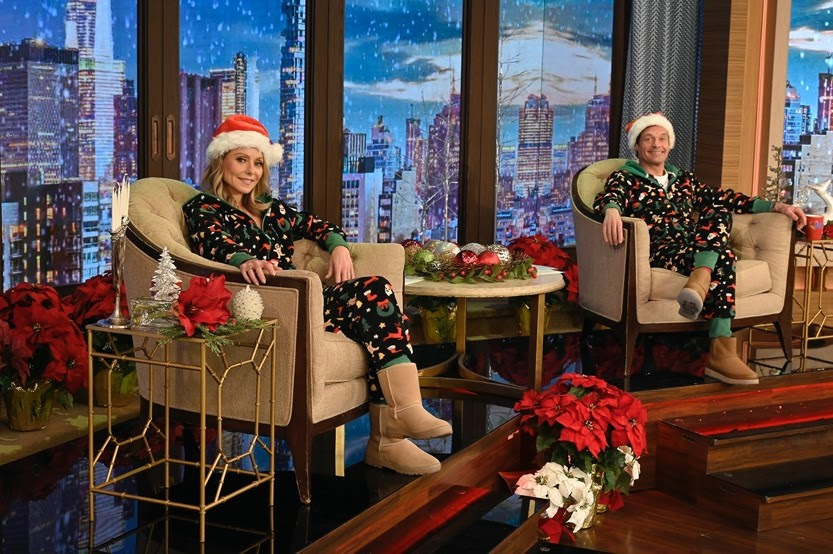 Kelly Ripa and Ryan Seacrest will keep the holiday spirit front and center with two special December broadcasts: “Live’s Holiday Sweater Party” and “Live with Kelly and Ryan @ Home for the Holidays.”

Airing this year on Dec. 18, “Live’s Holiday Sweater Party” is the show’s yearly tribute to that most iconic and festive piece of holiday garb. Joining in the 2020 festivities will be Goldie Hawn and Kurt Russell, checking in with Kelly and Ryan to talk about their movie “The Christmas Chronicles: Part Two.” “Live’s” annual holiday sweater pageant will go virtual this year, with five finalists vying for a $2,000 prize. Adding to the fun will be a virtual audience from across the country, all decked out in their holiday best.

On Dec. 22, the singing superstar most connected to Christmas, Mariah Carey, will be on hand for the 2020 edition of “Live’s” annual holiday episode, “Live with Kelly and Ryan @ Home for the Holidays.” Carey will celebrate the countdown to Christmas with the hosts and share details about her new Apple TV+ program, “Mariah Carey’s Magical Christmas Special.” In addition, singer Alanis Morissette will offer up a rendition of the John Lennon/Yoko Ono classic "Happy X-Mas (War Is Over).”

“Live with Kelly and Ryan” is distributed in national syndication by Disney Media Networks. It airs locally at 9 a.m. weekdays on WKBW-TV Channel 7. Visit “Live” on the web (KellyandRyan.com), Facebook, Instagram, Twitter and SnapChat (@LiveKellyRyan).

On Monday, Dec. 7, Apple Music’s flagship radio anchor Zane Lowe will sit down with Carey for an Apple Music exclusive interview. The two will take fans through Carey’s personally curated playlist of favorite holiday songs, and discuss her new music and recent memoir. Then on Dec. 25, Carey will appear on Apple Music Hits for a six-hour “Holiday Hits” special, featuring her most beloved festive songs, and introduce the new version of “All I Want For Christmas Is You” from the Apple TV+ special. She’ll also share her own holiday memories, alongside additional artists and Apple Music radio hosts with their own Christmas messages for fans.