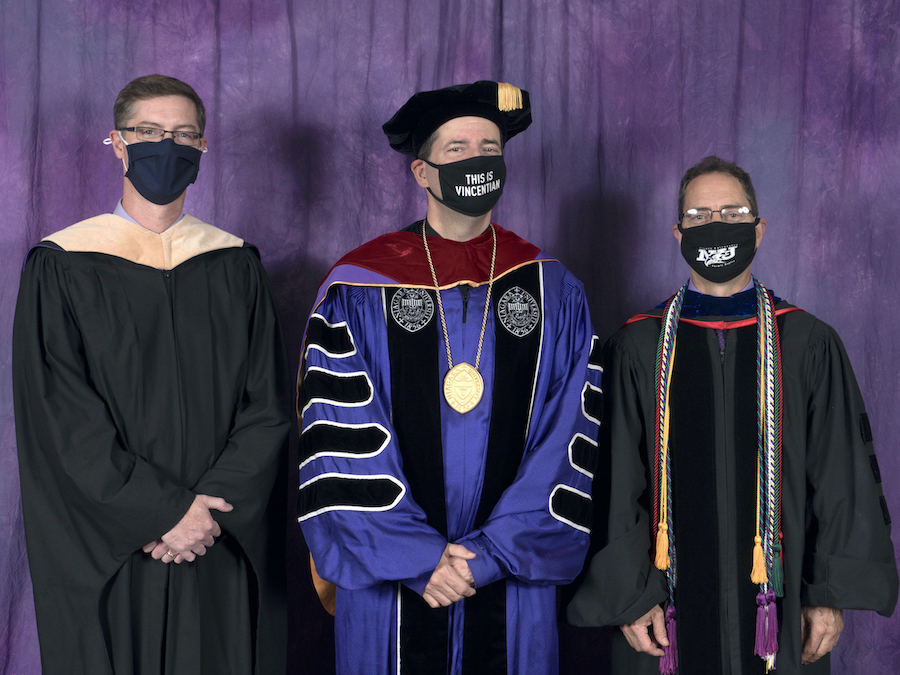 As part of its celebration of Vincentian Heritage Week, Niagara University recognized the extraordinary contributions of five individuals who have “lived the mission of St. Vincent de Paul” at its annual convocation, held simultaneously in the Alumni Chapel and livestreamed Sept. 30.

This year’s honorees were Heather C. McGhee, distinguished senior fellow of Demos, who received an honorary Doctor of Laws degree; Andrè K. Ware, an alumnus of the Niagara University Class of 2016, who received the Rev. Thomas A. Judge, C.M. Award; Buffalo Niagara Waterkeeper, which was given the Vincent de Paul Medal (accepted by Jill Jedlicka, executive director and waterkeeper); Dr. Mark A. Gallo, Niagara University professor of biology, who received the Ozanam Medal; and Daniel S. McMann, NU facility planner, who received the Vincentian Mission Award. In addition, three of the university’s Vincentian Scholars – Carolyn Delaney, Valerie Garcia-Batiz and Jacob Tucker – were presented with honor cords at the event.

McGhee, who also delivered the convocation address, “Environmental Justice and Racism,” was honored for her strong commitment to bringing scholarship, passion and innovative practice to eliminating racism and championing the rights of the marginalized. She is the immediate past president (and now, distinguished senior fellow) of the public policy organization Demos. Under her leadership, Demos moved its original idea for “debt-free college” into the center of the 2016 presidential debate; argued before the Supreme Court to protect voting rights in January 2018; helped win pro-voter reforms in five states over two years; provided expert testimony to congressional committees, including a Supreme Court confirmation hearing in 2017; and led the research campaigns behind successful wage increases for low-paid workers on federal contracts, as well as at McDonalds, Walmart and other chain retailers. McGhee is an influential voice in the media and an NBC contributor, was a featured speaker at the inaugural Obama Foundation Summit in October 2017, and is the author of “The Sum of Us: What Racism Costs Everyone and How We Can Prosper Together,” which will be published in early 2021.

Ware, who holds a B.A. in political science from NU and a master’s degree in public administration from New York University’s Robert F. Wagner School of Public Service, is committed to increasing civic and educational engagement among young people in marginalized communities. Ware was a volunteer with the Peace Corps and served in Ukraine from 2016 to 2018, where he wrote grants and developed programming for a nonprofit that assisted with the reintegration efforts of internally displaced peoples from Donbass and Crimea. He has also worked at the department of probations, the Dorchester Bay Economic Development Corp., and the Studio Museum in Harlem. He interned for Federal Judge Sterling Johnson and Mayor of Niagara Falls Paul Dyster. Today, Ware works for the nonprofit “Global Kids,” where he teaches high school students about global issues, how those issues affect them, and ways they can organize to create positive change in their communities.

Buffalo Niagara Waterkeeper was recognized for its work in environmental justice and sustainability over the past 30 years. With a four-fold mission – to protect the water, to restore both the waterways and the surrounding ecosystems, to connect people to their waterways, and to inspire both economic activity along the waterways and community engagement – it has served as the guardian of Western New York’s fresh water, which spans 1,440 square miles over five counties: Erie, Niagara, Wyoming, Orleans and Genesee.

Gallo, a professor, scholar, and environmental activist, has been a member of NU’s biology faculty for 25 years. Over those years, he has mentored numerous students and has led the university’s environmental efforts. He serves as co-chair for both the master planning and the sustainability committees; has planted a large number of trees on campus; and applied for and received a grant from the Niagara River Greenway Commission to remove invasive species from the Witmer Road entrance forest.

McMann brought his expertise and commitment to sustainability to NU in 2014 as facility planner, where he has completed project after project, always with an eye for the natural environment and sustainable solutions. He is helping to lead Niagara to a more sustainable future through his involvement with both the university’s master plan and its sustainability committees, and his many projects include the university’s annual Earth Day events, the evaluation of public space recycling and trash, the proposal for a renewable energy solar array on campus, and the continuing monitoring of its tree management plan.

NU theater juniors Morgan Gilliker and Ricardo Garcia performed the national anthems of Canada and the U.S., respectively, and the Rev. Dennis Holtschneider, C.M., ’85, president of the Association of Catholic Colleges and Universities, gave the invocation. The Rev. James J. Maher, C.M., NU president, closed the ceremony with remarks and a final blessing.